Palestinian militants fired two rockets deep into southern Israel from Gaza on Saturday, and the Israeli military responded with a number of air strikes on militant targets, shaking an already tenuous truce.

Sirens sounded in the middle of the night in Beersheba, the largest city in southern Israel, some 18 miles from the Gaza border, warning of incoming fire.

The military said its missile defenses intercepted the two rockets. 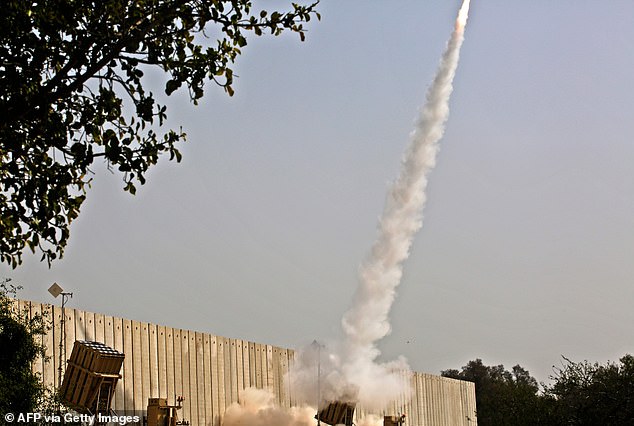 An Israeli interception missile is fired above the southern Israeli city of Ashkelon on November 13, 2019, to intercept incoming short-range rockets launched from the Palestinian Gaza Strip. Islamic Jihad launched a number of rockets into southern Israel last night and a few hours later, Israeli military responded by attacking a number of Hamas outposts 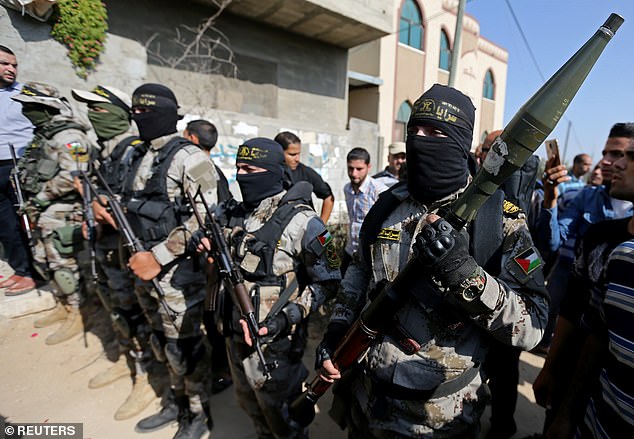 Palestinian Islamic Jihad militants take part in the funeral of their comrade in the southern Gaza Strip November 14, 2019. The Iran-backed militants are the second largest Islamist group in the occupied Gaza strip. The fighting was triggered on Tuesday when Israel killed a top commander of the organisation

A few hours later, Israeli aircraft struck a number of militant outposts belonging to Hamas, the Islamist group that rules Gaza. No injuries were reported.

The worst fighting in months was triggered on Tuesday when Israel killed a top commander from the Iranian-backed Islamic Jihad, deeming him an imminent threat.

Gaza medical officials said 34 Palestinians had been killed in the two days of fighting, almost half of them civilians. 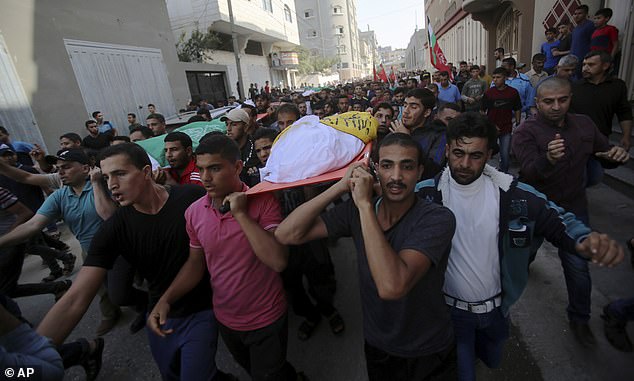 Mourners carry the bodies of Rafat Ayyad and his children, Islam and Amie, who were killed in an Israeli airstrike, during their funeral in Gaza City, Wednesday, Nov. 13, 2019. Reports from today say that 32 Palestinian civilians have been killed during the days of fighting between Islamic Jihad and Israel

At the same time, hundreds of rocket launches by militants paralyzed much of southern Israel and reached as far north as Tel Aviv, sending entire communities to shelters. Dozens of Israelis were injured.

Throughout the fighting, Hamas, the dominant force in Gaza, appeared to have stayed on the sidelines. That may have helped stem the escalation.

Israel’s military, however, said on Saturday that it would hold Hamas responsible for any attack emanating from Gaza.

‘Hamas will bear the consequences for actions against Israeli civilians,’ it said in a statement.

Sir Martin Sorrell, 74, faces probe after ‘slapping rival across the...

Virginia Giuffre who claims she had sex with Prince Andrew has...