Once part of a vast global empire, founded by the fearsome warrior Genghis Khan in 1206, today Mongolia is three times the size of France.

However, because of its inhospitable climate and rugged geography, the East Asian country has a population of just 3.1 million — roughly the same as Madrid.

In the capital of Ulaanbaatar, where about half the population lives, it can hit -40c in winter and swing up to 30c in summer. Fortunately, the weather is in the high 20s when we arrive in the traffic-clogged metropolis. 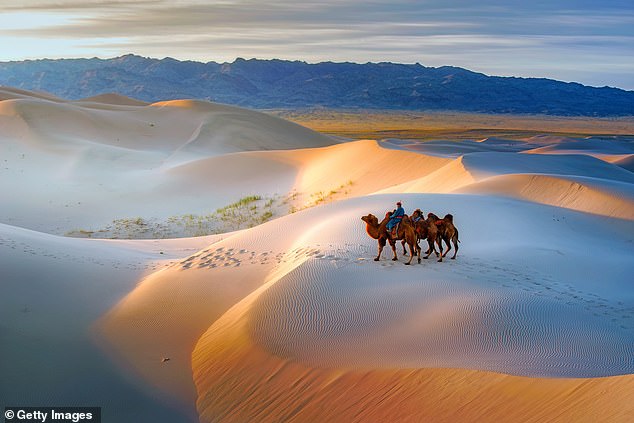 The abundant ice cream shops have a steady flow of customers. The cashmere stores, which are equally as rife, not so much.

I spot a ger, the Mongolian name for a yurt, in the shadows of a skyscraper; a symbol of old Mongolia coming up against the new.

This mineral-rich country, sandwiched between Russia and China, has a strong nomadic culture but a growing number of young people are ditching this tough way of life for the city, with ponies swapped for Toyota Priuses and camel milk for cappuccinos.

I peek inside the lone ger, which is selling souvenirs, before returning to my high-rise hotel where a dozen other tourists have gathered for a 14-day trip arranged by Exodus, the adventure tour operator.

Exodus reports a spike in interest in breaks that combine journeys off the beaten track with ancient history be it here in Mongolia with the stories of the Mongol Empire, trekking along ancient Inca ways in Peru, learning about the Nabataean Kingdom in the deserts of Jordan, or following the trails of the pharaohs to remote spots in Egypt. Especially so since the TV programme The Nile, presented by historian Bettany Hughes, and thanks to the country’s improved security.

For us, Genghis Khan is the backdrop, with a focus on adventure. And with no signposted tracks outside the capital and little English spoken by the nomads, a knowledgeable guide — Odka — is essential. 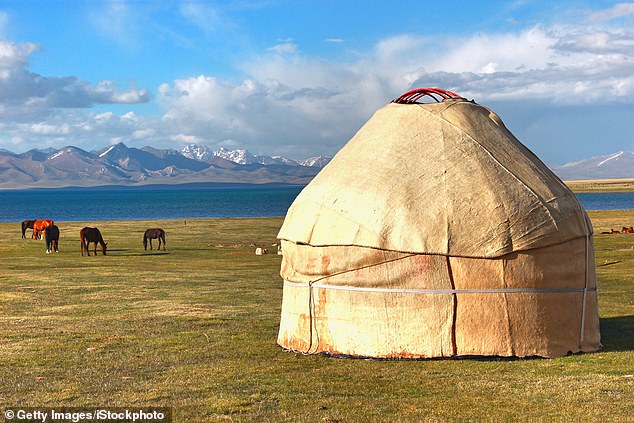 The ger camps may be similar in appearance to those from Genghis’s days but they are more comfortable with electric lights and fires that can be lit on chillier nights, writes Sadie

There is going to be a lot of driving, he tells us as we start out, up to 12 hours on some days.

‘It’s going to be bumpy and you will have to trust us,’ Odka warns. ‘There won’t be roads and we don’t use GPS, our drivers just know where they are going.’

We set off in a convoy of robust, comfortable people carriers, the smog of the city giving way to fragrant grassy hills.

David, a retired teacher from London, has expressed his interest in wildlife, and his wish comes true as we hit Hustai National Park. This nature reserve is home to the world’s last true breed of wild horse, the Przewalski (or takhi in Mongolian). 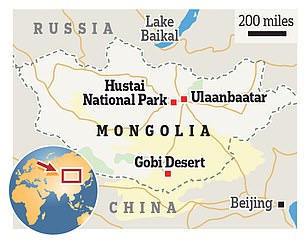 A map of Mongolia, which has a population of just 3.1 million

Driving down a long road across the steppe, we soon get a few feet from the endangered equines as a herd unexpectedly emerges to graze by the gravel road — such a rare encounter that even the drivers get out to take pictures.

This is just the start of our horse adventures. A couple of days later, half of the group go riding with a local herder.

It was on horseback that Genghis Khan (1162-1227) set forth from Mongolia to conquer great swathes of Asia — and we are about to learn about negotiating the steppes just as the ancient warlord once did.

It turns into a pretty hairy experience as the man leading me is suddenly bucked off his horse, breaking his ribs and letting go of my reins, meaning I go galloping off across the Mongolian plains. Luckily, my mount slows down and I hop off, all bones intact.

Each night we eat and sleep at tourist ger camps. 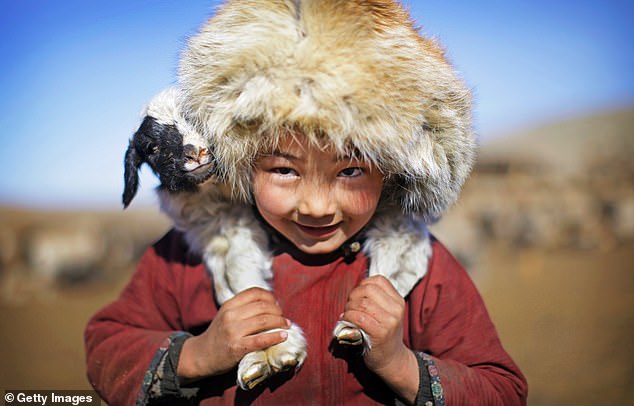 Back in time: A Mongolian boy carries a lamb

‘Is there Wi-fi here?’ Ellen from New Zealand asks in a bid to Whats-App her family, although we soon learn that the further we go, the weaker the internet signal. The ger camps may be similar in appearance to those from Genghis’s days but they are more comfortable with electric lights and fires that can be lit on chillier nights.

I find the thick wool blankets sufficiently snug. There are even showers and flushing toilets, which were possibly not around in the late 12th and early 13th centuries.

To break up the long drives we visit several Buddhist monasteries, some left in ruins as a reminder of the brutal Stalinist repressions between 1937 and 1939. We also stop off at nomadic ger camps and converse with locals through Odka.

‘If someone came and knocked on my door in London, I wouldn’t let them in,’ says Andrea, a retired teacher, acknowledging how friendly and hospitable our hosts are.

We are offered fermented camel milk and dried chunks of milk curd, which have a unique flavour. The milk tastes like sour yoghurt with a slight fizz, while the curd has a musty parmesan taste.

In one ger we are given some peppery snuff by a sparkly-eyed man called Tumurbaatar, which makes everyone sneeze and giggle. His wife then shows us how to milk a horse, with mare’s milk being another staple Mongolian delicacy along with slow-cooked mutton.

By day six we make headway into the Gobi Desert, to explore the place where the first fossilised dinosaur eggs were found and we hike up Mongolia’s longest sand dune. Some go for a camel ride.

I go for a long walk at sunrise, feeling tiny as I trudge across the vast landscape with large birds of prey swooping overhead.

There’s not another soul in sight and it’s as though the centuries are slipping away back to the days of Genghis, the brutal warrior who once ruled the steppes.

Then we fly back to the skyscrapers and souvenir shops of Ulaanbaatar — and the Mongol Empire seems a long way away.