Which of us would have imagined gathering round our television sets on a Saturday evening to watch the Queen’s second son squirming and dissembling as he’s grilled about his friendship with a convicted paedophile?

We thought Princess Diana’s tearful interview about the state of her marriage to Prince Charles was shocking. But Andrew’s appearance on the BBC2 Newsnight special with Emily Maitlis was a whole new low for the Royal Family. How could it have come to this?

If the intention was to shut down, once and for all, the speculation over the Prince’s relationship with sex offender Jeffrey Epstein then it was a catastrophic failure. If it was shameful for a senior Royal to be taking part in such a charade, then it was also deeply embarrassing to watch.

He stumbled over limp, unconvincing excuses, demonstrated a startling lack of self-awareness and – most damningly of all – displayed an astonishing lack of empathy for Epstein’s victims. 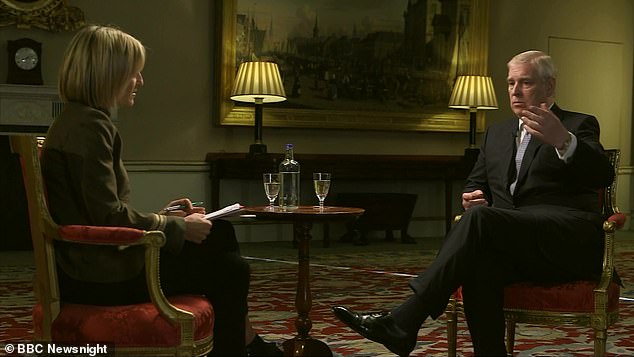 If the intention was to shut down, once and for all, the speculation over the Prince’s relationship with sex offender Jeffrey Epstein then it was a catastrophic failure

Sitting ramrod straight, Andrew looked completely out of his depth, a defeated man. Was the panic-stricken expression a plea for public sympathy? He will have gained almost none. There was little humility and not much humanity, either.

One critical moment told us everything we need to know about the man. Ms Maitlis, with deftly polite professionalism, pressed him on whether or not he had sex with Virginia Roberts Giuffre in 2001 when she was only 17.

He batted the question away, blustering that he had ‘no recollection’ of even meeting her.

‘No,’ he retorted. ‘And without putting too fine a point on it, if you’re a man it is a positive act to have sex with somebody… it’s very difficult to try to forget positive action and I do not remember anything.’

This casual remark, tasteless and dismissive, demonstrates with clarity just how inarticulate and lacking in self-awareness the Prince truly is.

Andrew’s performance for the cameras was, as might have been predicted, maladroit.

But his awkward demeanour should not divert us from the more important fact that he failed to acknowledge, let alone answer, the important questions facing him. He struck false note after deafening false note.

How could he describe Epstein’s behaviour as no more than ‘unbecoming’? Or say that Epstein’s New York mansion was merely ‘a convenient place to stay’?

He had no idea of about Epstein’s true character, he claimed, because ‘I was transitioning out of the Navy’. His visit to Epstein on the paedophile’s release from jail had – apparently– demonstrated ‘leadership’. I lost count of the number of times he contradicted himself or gave a strange or unintelligible answer. 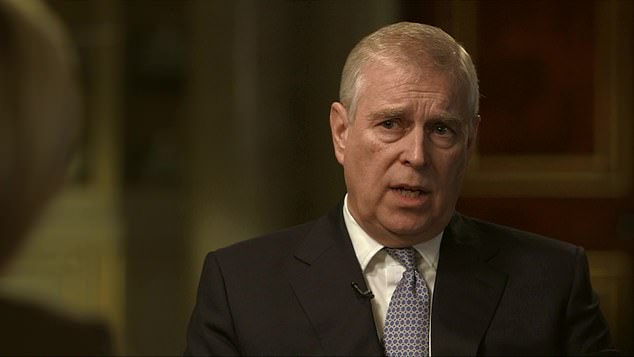 Andrew’s performance for the cameras was, as might have been predicted, maladroit

And again as he tried to explain his striking lack of curiosity when staying at Epstein’s home which, it would later emerge, had a constant stream of young women drifting in and out.

‘I live in an institution at Buckingham Palace which has members of staff walking around all the time and, I don’t wish to appear grand, but here were a lot of people who were walking around Jeffrey Epstein’s house.

‘As far as I was aware, they were staff.’

THAT the Prince was driven to undertake last night’s lorry crash of an interview only serves to show how stubbornly the questions over his links with Epstein have remained and the gravity of the situation in which he finds himself.

The fact is that, as the Queen’s favourite child, he has been indulged. And both the Queen and Andrew’s ex-wife Sarah, Duchess of York, continue to shower him with praise when criticism would be more appropriate. He is prisoner inside his own bubble of entitlement and self-regard.

Sarah yesterday described him – improbably – as ‘a true and real gentleman’ and a ‘giant of a principled man’.

But she has her own reasons for keeping in with a former husband who persuaded Epstein to cough up to £15,000 to help her deal with her debts.

As to the Prince’s claim to have ‘no recollection whatsoever’ of meeting Virginia, I am not surprised. She has insisted – in court documents lodged in the US -– that she had sex with Andrew on three occasions while a ‘sex slave’ for Epstein.

IS it plausible that Andrew simply doesn’t remember the encounter? Sadly, yes. Unfortunately, there are still men in the world who see women purely in sexual terms.

It seems unlikely she would have left much of a mark in his mind or that they would have spoken in depth about golf, his true passion, for example.

Yes, it is hard for the Royals to make real friends.

Prince Harry told me himself how difficult he found it to trust people, which was why he was so close to William. But this is no excuse for the fact that so many senior Royals behave badly despite – or perhaps because of – their lives of wealth and privilege. They are cosseted and indulged.

It is understood that Andrew’s advisers felt there was no choice but to try to clear the air with an interview. But they must surely be regretting that decision now.

This has been destructive not just for Andrew but for the entire Royal Family.

How, he was asked, would he move on from this?

The answer, he replied, was by ‘carrying on with what I do. I have a number of things that I have been doing since 2011,’ he continued. ‘They’re pretty well organised, pretty successful.’

In other words, he simply has no clue.

Thank goodness Prince Andrew no longer has any realistic chance of occupying the throne.

I’m A Celebrity Get Me Out Of Here: Ant McPartlin returns...