What do you do when the man you thought you loved morphs into a controlling monster? Isolated and fearing for her life, Jacqui Childs turned to the only person unafraid to stand up to him… 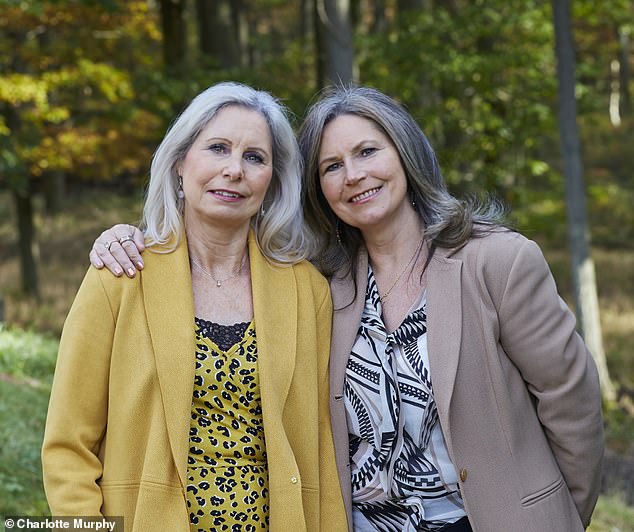 Jacqui (left) with her sister Mandy, who helped her to escape

The moment I saw Terry, I thought he was the whole package. He was 6ft, fit, muscular, well dressed. I’d been internet dating and met a few dreadful men.

It was Easter 2013 – I was 56 and had been single for 23 years since my divorce. I’d raised two children, worked as a school receptionist for 25 years and owned my home. I’d had relationships, but never brought anyone home as the kids came first. Now they were grown and gone, it felt like my time.

I fell for Terry in a big way. He was nine years younger, divorced and lived a stone’s throw from me. We seemed well matched: we both loved walking, we enjoyed the same music. Terry told me that he liked ‘women who dressed like women’ – which wasn’t a problem as far as I was concerned; that’s my style anyway.

He worked from home in IT support, earned a good salary and was generous. He’d book meals and theatre tickets and never asked me to pay. It felt nice. Within weeks of our first date, he invited me on holiday to France. At first, Terry was wonderful with my family too. My son and his family were living in a council flat which wasn’t ideal, so Terry suggested that they have his place – a semidetached house with a garden – for a low rent, and he’d move in with me. It seemed kind, but it moved things forward very fast and gave him a hold over me; I knew that if things broke down between us, my son and his family would be turfed out.

My younger sister Mandy was worried from the start. There’s only a year between us and we’re close, although very different: I’ve always liked the idea of finding love but Mandy’s a free spirit; I hate confrontation, she’s more outspoken. The second time Mandy met Terry, she and I were going to the theatre, so he offered us a lift in his new BMW. He had pink champagne on ice for us. We’d just decided that he was moving in with me so it was a mini-celebration – but when we told Mandy the plan, her face said everything. Her first words were, ‘F***ing hell’.

From then on, Terry loathed her. He didn’t like strong, opinionated women. He told me she was jealous because she couldn’t get a man. Mandy would call and Terry would say to me, ‘We’re a couple now; you can’t go running when she clicks her fingers. She’s got to give you two weeks’ notice.’ Even if I managed to see Mandy he’d ruin it, setting time limits, interrogating me about every thing we said.

I thought Terry was just insecure. The second I got to work each morning, I had to phone him, then again in my lunch break. When Terry was working from our home, he’d go through my things. He found a photo of an old boyfriend on my computer. Terry messaged him, warning him to keep away from me. My ex works in the police force and knew it was a bad sign, so took a screenshot of Terry’s message. (It was later used in evidence.) Terry even went up to the loft and found my old wedding album. ‘You can’t think much of me if you need photos of him,’ he said. I tried to tell him those photos were part of my life, my children’s history – but in the end, to please him, they went in the bin.

Sometimes he’d be the lovely man I first met. He’d arrange weekends away – we stayed in a castle in Wales, we ate at Rick Stein’s restaurant in Padstow. But the rules piled up. I had to wear stockings and suspenders at weekends – he insisted on buying them himself. He thought I was dressing ‘too old’, so he threw out my clothes and bought new ones. At work, I had to wear trousers as Terry didn’t want me showing my legs when there were other men about.

Gradually, I saw much less of Mandy, less of everybody. He fell out with anybody I loved. I remember him storming out of a café because Mandy had suggested we visit our nieces. Mandy followed him, shouting, ‘Who do you think you are? You’re not her jailer!’

When control becomes a crime

Last month MP Rosie Duffield made headlines when she shared her experience of coercive control. ‘Abuse isn’t only about visible signs. It is very often about control and power,’ she told the House of Commons.

He humiliated me at work, too. A colleague was leaving and we planned to go to the pub. I tried to keep it a secret but somehow Terry always knew. He marched into school as we were coming out of assembly and said in front of everyone, ‘Get out now!’ I followed him to the car, shaking. I felt like the girl whose dad had caught her with boys at the school disco.

In all the drama, I lost myself. Terry told me so many times how thick I was, what a flirt I was, how I couldn’t be trusted. He’d mimic me flicking my hair or laughing at someone’s jokes. It got to the point where I couldn’t make a decision without him. I remember standing at traffic lights, holding his hand, thinking, ‘I’ve raised kids, built a life – now I’m afraid to cross the road.’ The more frightened I felt, the more dependent I became. Terry talked me into retiring early at 60. My pension was only worth £300 a month, but Terry said he’d top up my money. He made it sound like he was looking after me, but it meant I lost my financial independence and now I had no reason to leave the house, either.

In 2016, at New Year, Terry invited some people (not Mandy) round, got down on one knee and proposed. I hated my life and myself, but standing in front of everyone I didn’t know how to get out of it. ‘Is it a yes or a no?’ he pushed. I mumbled something like, ‘Well… yes.’ We married that July on a cruise he’d booked. Mandy wasn’t there, nor my children. Terry always booked cruises – I think it’s because once you’re on the ship, you’re trapped.

I had no life any more and I wanted to get away. Terry was becoming physically violent. He was always smashing the crockery – I remember a shard flew up and caught me under the eye. The only thing that concerned him was what I’d say to other people. I told my son I’d cut myself on a cupboard door. Another time, Terry put his hands around my throat and began to choke me. I was so broken, I just thought, ‘Finish me off.’

My son saw the marks on my neck the next day. By now, my family knew what Terry was like and were scared for my life. My son moved out of Terry’s house, banned him from seeing his two children and begged me to move in with his family. I knew that I had to end the marriage. I also knew I had to be so careful.

In June 2017, Mandy and I went to my local police station. I could barely speak but I managed to say that I wanted to report my husband for domestic abuse. As I sat giving my statement, I saw Terry walk into the station. I didn’t know how frightened I was of him until that moment – I thought he was going to kill me. I completely lost it, jumped up, slammed the door of the interview room and flattened myself against the wall. The police were fantastic. They told me that Terry couldn’t get to me and that they believed me, which was exactly what I needed to hear. Terry actually went to the police reception, burst into tears and said that he wanted to report his wife for abusive behaviour but the police saw through him. They had enough information from us to keep him in a cell overnight and Terry has never been back to my house since. For the next few weeks, Mandy stayed with me and slept with a knife under her pillow.

The police built a case, speaking to friends, family, neighbours, colleagues – 11 of them were willing to give evidence against him in court. They even found a message on Terry’s phone from an ex-girlfriend saying his controlling behaviour was making her ill. In the end, in September 2018 Terry pleaded guilty to controlling and coercive behaviour. He got a 20-week jail sentence, suspended for two years – which means he can live normally but if he commits a crime he will go straight to prison – and a 24-month restraining order so he cannot visit my home or the street I live on. By the time he was sentenced, he’d relocated to Kent and met a new woman – on a cruise.

Recovery has been slow but Mandy has been wonderful. She helped me through the divorce and got my CV together so I could find a new job as a dental receptionist. I’d never heard of the term ‘coercive control’ but reading other women’s accounts has been eye-opening; it’s as if we’ve all been married to the same man. At times, I’ve felt ashamed for letting myself become a victim, but I know that anyone can get caught in this hell. I’m safe now and at peace.