Ivanka Trump was all smiles as she stepped out of her Washington, D.C. home on Monday wearing a black wool coat.

The 38-year-old first daughter was seen leaving her front gate and making her way to the Secret Service vehicle parked at the curb around 8:50 a.m.

Ivanka wore her ladylike wool coat over a midi dress and topped off her monochromatic outfit with a pair of matching black suede heels. 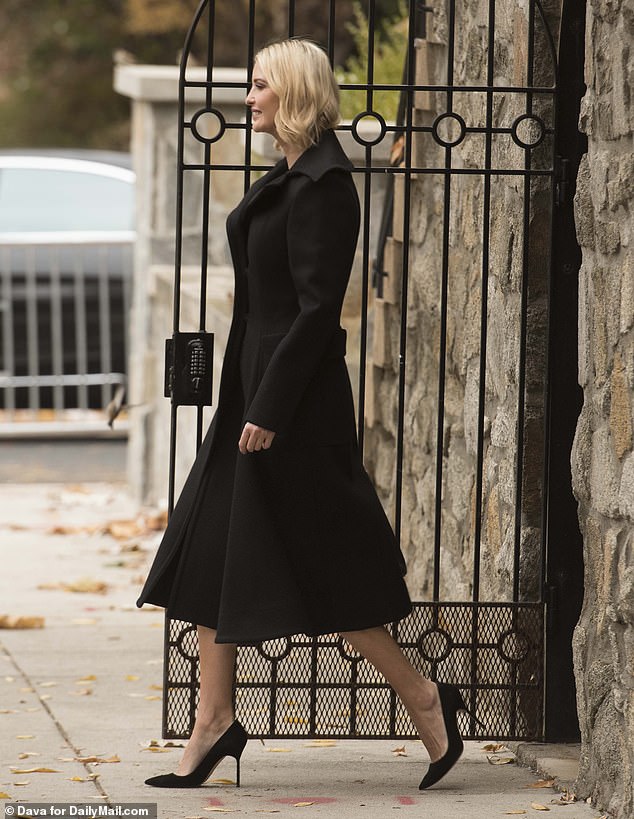 On the go: Ivanka Trump was seen leaving her Washington, D.C. home at 8:50 a.m. on Monday 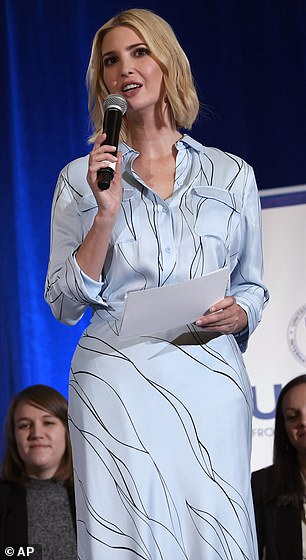 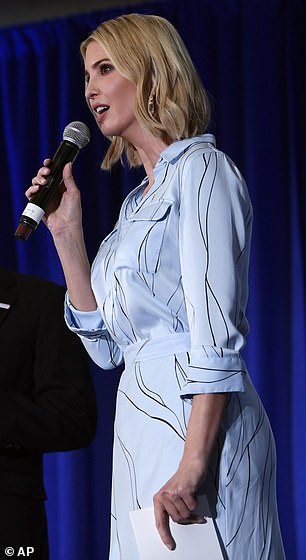 Quick change: The 38-year-old later revealed a matching blue skirt and shirt set from Equipment as she attended an event 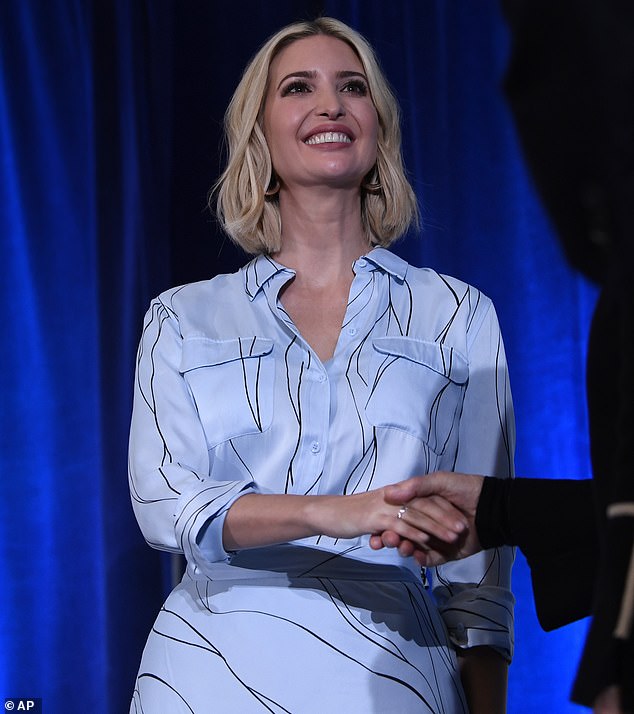 Speaking out: Ivanka was helping to promote her Women’s Global Development and Prosperity Initiative, while announcing new recipients of grants as part of the program

The White House senior adviser updated her go-to hairstyle by wearing her blonde bob in loose waves that framed her face, a look that she has favored in recent weeks.

Ivanka later met with U.S. Agency for International Development Administrator Mark Green later on in the day to announce an additional $50 million for the Women’s Global Development and Prosperity Initiative.

Established by her father, President Donald Trump, in February, the initiative aims to help advance economic empowerment for 50 million women in the developing world by 2025.

‘W-GDP is the first-ever whole of government approach to women’s economic empowerment. Today’s new announcements reflect how W-GDP is prioritizing partnering with the private sector and driving collaboration for major impact! Together we will reach our goal of empowering 50 million women by 2025,’ she told FOX Business.

The first daughter looked happy to start her work week on Monday morning despite having a busy weekend at home.

Ivanka and her husband, fellow White House senior adviser Jared Kushner, kicked off their Saturday by braving the near-freezing temperatures in D.C. and going for a run together. 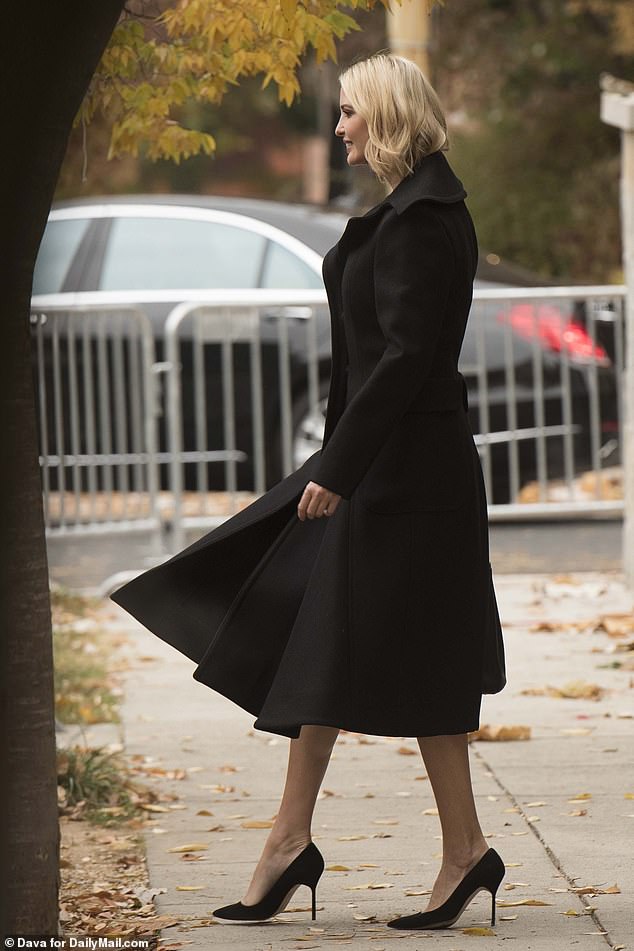 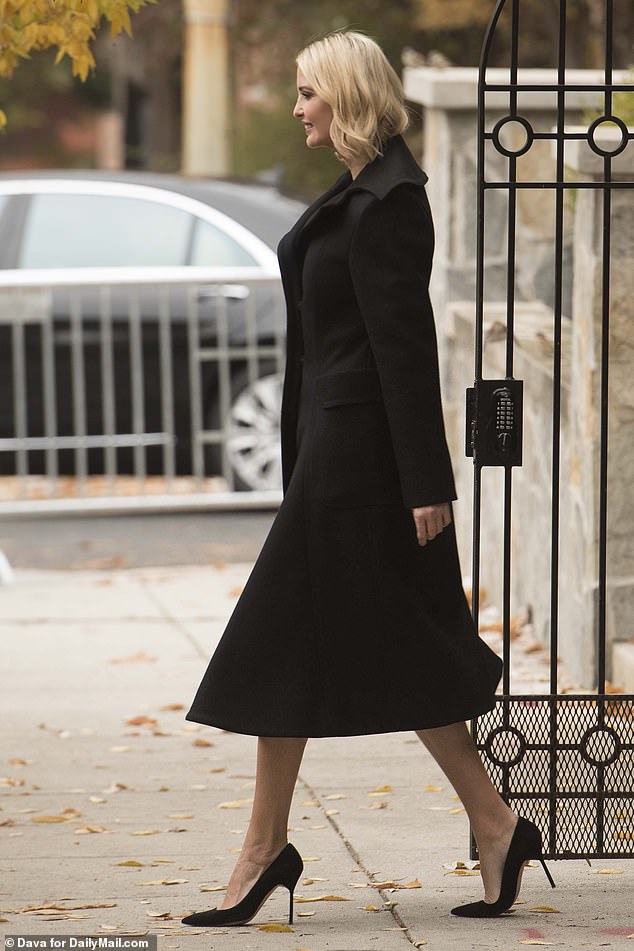 Style: The White House senior adviser updated her go-to hairstyle by wearing her blonde bob in loose waves that framed her face 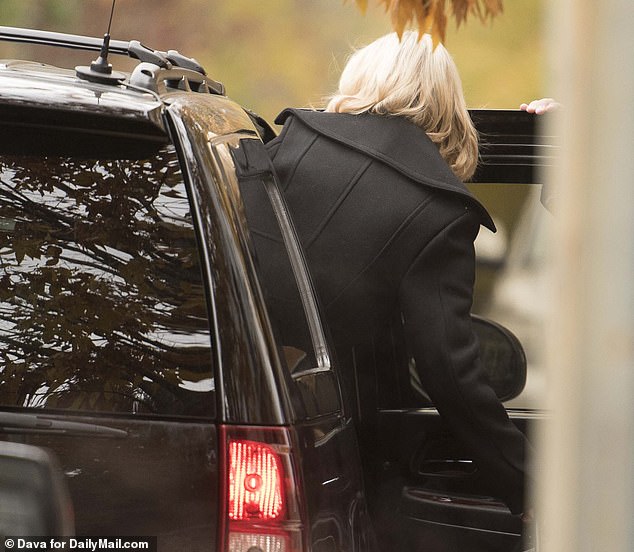 Plans: Later on in the day, Ivanka will be announcing an additional $50 million for the Women’s Global Development and Prosperity Initiative

The couple ran appeared to be in good spirits as they ran for 70 minutes while their security detail followed them around their ritzy Kalorama neighborhood.

At one point the avid runners were seen chatting and laughing as they enjoyed the crisp fall weather.

Later on in the evening, Ivanka ditched her sports leggings for a sophisticated $2,000 black dress with a plunging neckline as she and Jared enjoyed a night out on the town together.

She was seen leaving their home wearing the sophisticated knee-length frock, which she paired with a $75 headband by designer Lele Sadoughi and black stiletto heels.

The mother of three accessorized her look with pearl earrings and a black clutch bag. The dress had three-quarter sleeves with detailed cuffs, and it was pulled in at the waist with a coordinating velvet belt.

The senior White House adviser was first seen wearing the custom Altuzarra dress, worth $2,000, at the Winter Olympics in Korea in February 2018. 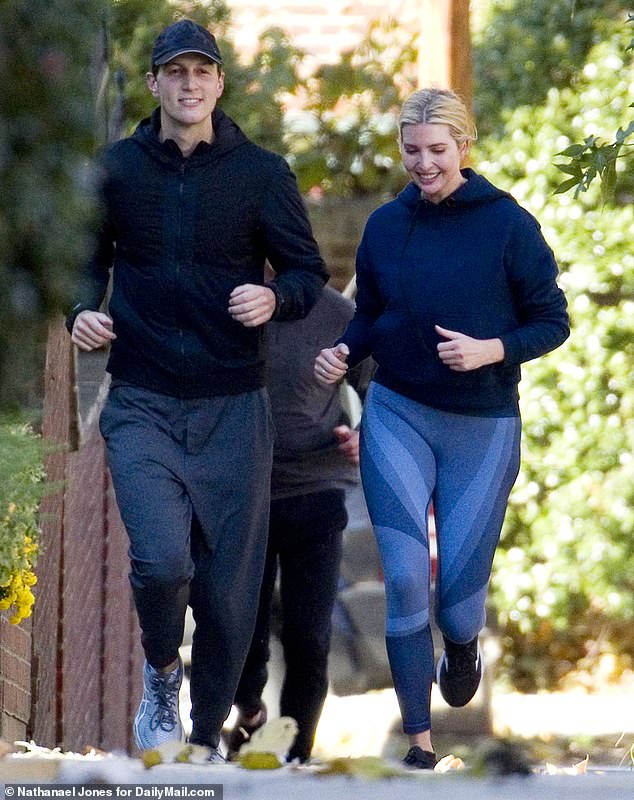 Feeling fit: Ivanka and her husband, fellow White House senior adviser Jared Kushner, braved near-freezing temperatures on Saturday when they went for a run together 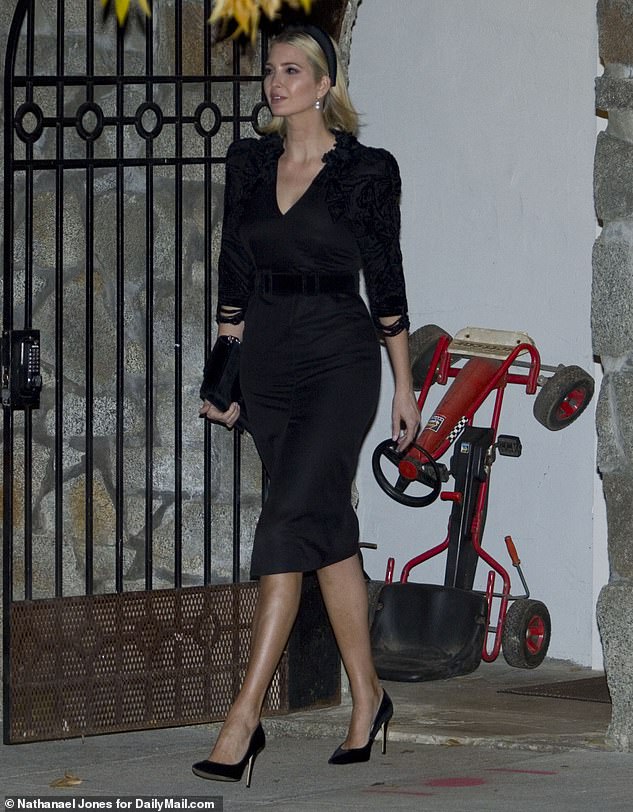 Night on the town: Ivanka and Jared were seen heading out of their D.C. home dressed to the nines on Saturday evening, with the former wearing a little black dress

Dress to impress like Ivanka in a dress by Altuzarra

Shop the label at Neiman Marcus

Ivanka Trump and her husband Jared Kushner headed out to a formal affair on Saturday evening. For the occasion, the First Daughter dressed to impress in a conservative black velvet and silk dress by Joseph Altuzarra, black pumps and an oversized velvet headband by Lele Sadoughi.

Ivanka’s midi-length dress featured intricate details all along the sleeves, and a coordinating velvet belt. She kept her look coordinated with the velvet headband and velvet pumps.

Since the piece is custom, unfortunately it’s not available to buy, but you can shop the label at Neiman Marcus by clicking right. Or why not emulate Ivanka with a black satin dress of your own? Head to the carousel below to find our favorite lookalikes. Just snap up her headband and add some black pumps to copy her sophisticated look! 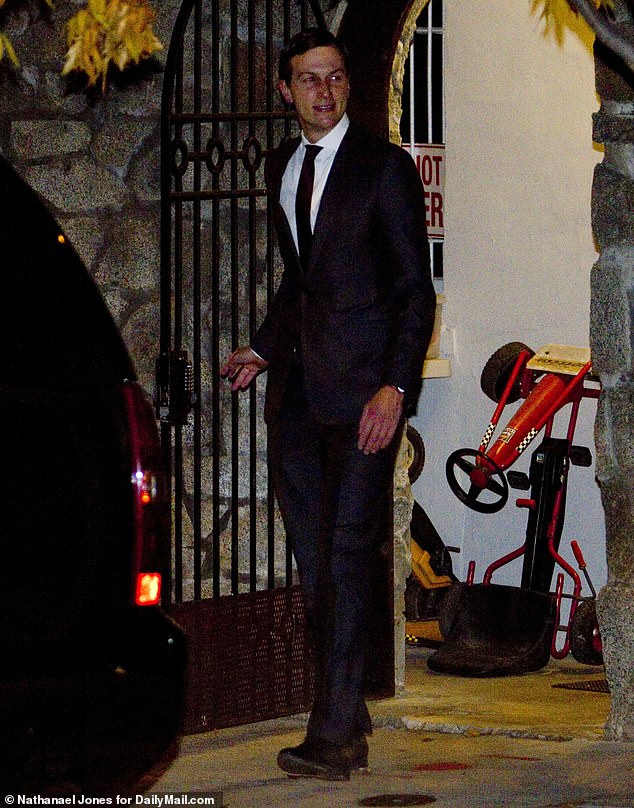 Decked out: Jared opted for a dark suit, white shirt, and black tie. It is not known where they were headed that night

In South Korea, she opted for a more demure look with opaque stockings and black pumps, but this time she left her legs bare despite the cold.

Her doting husband Jared donned a dark suit, white shirt, and black tie. It is not known where they were headed while dressed to the nines.

Ivanka and Jared, who are parents to three children, Arabella, eight, Joseph, six, and Theodore, three, had a busy week as the public impeachment inquiry against her father got underway.

The book debuted at number one on The New York Times bestseller list on Wednesday evening — but with a dagger symbol next to it denoting the placement is likely due to a significant number of bulk sales.

Weeks before the book was released, the Republican National Committee offered a signed copy of ‘Triggered’ for anyone who donated $50 or more.

Why tours combining adventure and history are all the rage in...