Eric Nartey outside the High Court in London, where he was awarded £50,000

A nurse who claims he has been left disabled for life after a chair collapsed under him at work has been given a £500,000 payout by the NHS.

Eric Nartey was working a night shift at St Bernard’s Hospital in Ealing in March 2013 when he sat down on a ‘defective’ chair, which collapsed beneath him.

The 40-year-old suffered a relatively minor injury to the base of his spine and his employers, West London Mental Health NHS Trust, admitted liability for the accident.

But Mr Nartey said he subsequently developed chronic pain syndrome, meaning he cannot work or walk more than 20 metres and will need looking after for life.

He sued his former bosses at Central London County Court and after a two-day hearing the NHS Trust agreed to pay him £500,000.

During the trial, he dramatically collapsed in front of the judge in court.

Lawyers for the NHS had claimed he was exaggerating his condition and accused him of ‘malingering,’ but Mr Nartey insisted he was telling the truth.

Mr Nartey told Judge Heather Baucher he was sitting at the nursing station on a hydraulic chair with an adjustable seat when ‘the seat of the chair suddenly dropped to the lowest setting’.

He told the judge: ‘The chair sort of collapsed. It dropped down. I panicked and tried to grab onto a desk but my hand slid off it and I ended up landing on my sacral area. I slid off the chair halfway down.’

He said the pain became ‘unbearable’ and he went home early from work. The next day, he visited his GP and was prescribed painkillers.

But he said his symptoms gradually became worse, with pain and numbness spreading from his lower back into his legs. 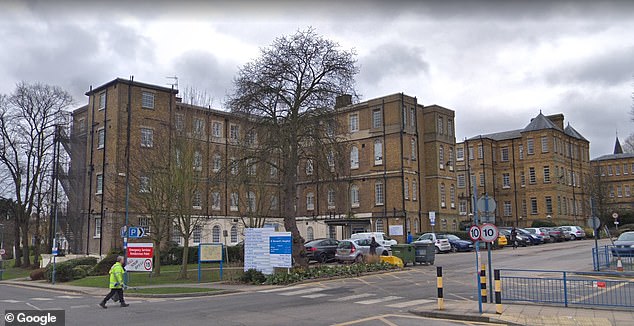 Mr Nartey was working a night shift at St Bernard’s Hospital in Ealing in March 2013 when he sat down on a ‘defective’ chair, which collapsed beneath him

He now has to use a wheeled walking frame and can no longer do his job, he told the court.

He saidL ‘The chair had a defect which caused it to give way. Mr Nartey fell to the floor. Liability is admitted. It is admitted that Mr Nartey likely suffered some loss as a result of the fall.’

‘We say this is an unusual but well-recognised serious outcome from a relatively modest incident,’ he told the judge.

Prior to the accident, Mr Nartey was a hard-working man, said the QC, having only taken a single day off from his pre-nursing job as a postman after suffering a car accident.

On the first day of the trial Mr Nartey collapsed backwards and rolled down a short flight of steps when his legs gave way as he tried to rise from the witness box.

NHS lawyers agreed to pay him £500,000 to settle his claim, cutting short the trial which had been set to last five days.

People with working class or regional accents are viewed as less...