EU chief Donald Tusk mocked Boris Johnson and other Brexiteers over their ‘take back control’ mantra today as he lashed out at populist politicians.

The outgoing European Council head vowed to fight against ‘political populists, manipulators and autocrats’ as he addressed a meeting of centre-right politicians in Croatia.

But in a calculated jibe at Brexiteers he said: ‘In times of uncertainty, and most probably there will be no other times, when everything changes around us, and runs off in all directions, people want to be certain, that those in power will not abandon them, that they will not turn their backs on them.

‘This is why it is so easy to win people’s hearts by those who shout in a loud voice: ”get up off your knees, make your country great again, take back control”.’ 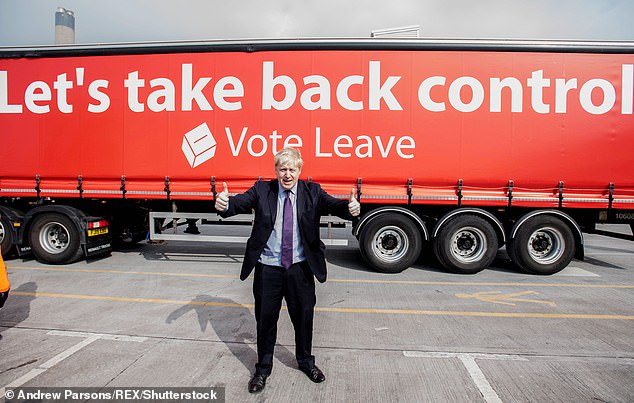 Mr Johnson posing with a Vote Leave lorry at a campaign in London in 2016. The slogan was one of their most often heard claims 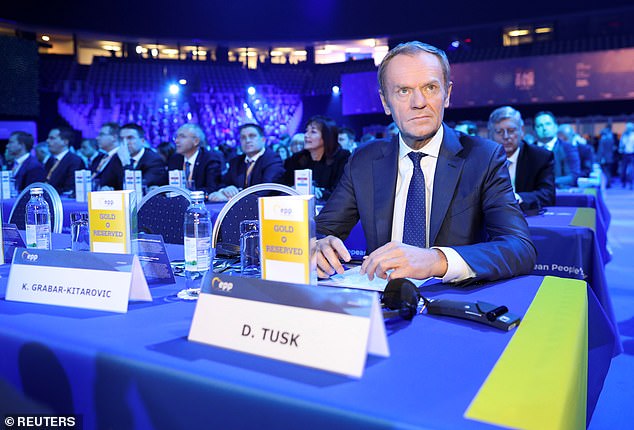 The outgoing European Council head vowed to fight against ‘political populists, manipulators and autocrats’ as he addressed a meeting of centre-right politicians in Croatia today (pictured)

The phrase ‘take back control’ was a key tenet of the Vote Leave campaign in 2016 run by Dominic Cummings, now Mr Johnson’s chief aide.

It was also repeatedly cited by then prime minister Theresa May as she attempted to win support for her doomed Brexit deal.

Mr Tusk is set to maintain a central role in EU politics, with Europe’s main conservative parties are set to choose him as the leader of their pan-Europe grouping at the two-day meeting in Zagreb.

The former Polish prime minister will be tasked with boosting the fortunes of the European People’s Party (EPP) – which includes German Chancellor Angela Merkel’s CDU and France’s Republicans.

Orban’s Fidesz party was suspended from the EPP group earlier this year because of the Hungarian government’s anti-Brussels poster campaign.

‘Let us all stand together on this most important political battlefield, on one side parties of irresponsible populism, on the other, our party of responsible popularity,’ Task told the participants.

‘I’m ready to fight and I hope you are ready too.’ 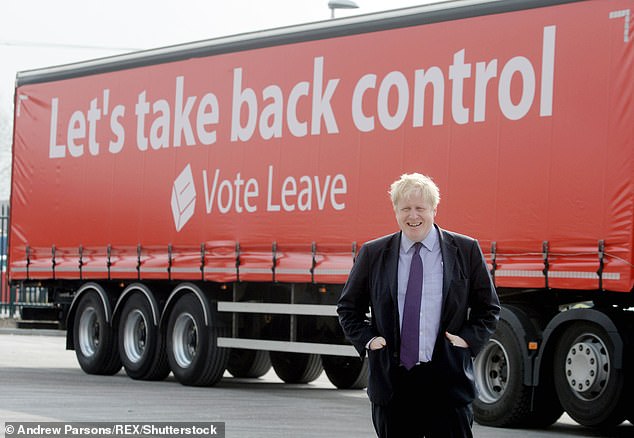 The phrase ‘take back control’ was a key tenet of the Vote Leave campaign in 2016 run by Dominic Cummings, now Mr Johnson’s chief aide

Last week Mr Tusk came under fire after he branded Brexit the ‘end of the British Empire’ – and told Remainers: ‘Don’t give up.’

His intervention was likened to that of a ‘jilted lover’ after the outgoing EU council chief delivered an extraordinary condemnation of Britain’s attempts to get out of the bloc.

Mr Tusk used a speech last night to claim the only way the UK could be a ‘global player’ was within the EU and leaving would render it a ‘second rate nation’.

But Brexiteers said it demonstrated the importance of cutting ties with Brussels quickly.

Former Cabinet minister Owen Paterson said: ‘His comments on ”the sovereignty of Europe as a political entity” explain why so many voted to Leave.

‘We believe the UK should govern itself, not form part of a European superstate.’

And Brexit Party MEP and election candidate Martin Daubney said: ‘Until the bitter end, Donald Tusk maintains his contempt for British democracy. The sooner we Leave the EU The better!’

Diamond jewellery stolen at German museum ‘was not insured’