Is it the moist, tangy filling that makes it so extra special? Or is it the light, golden pastry?

Either way, mince pies are a Christmas essential – but there are so many variations on offer on the high street it can be hard to know which ones to choose.

Luckily, the experts at Which? have sifted through this year’s offerings to pick the best.

And this year the winner of the best pie is… Marks & Spencer, whose triumphant pastries have even beaten ‘luxury’ offerings from Harrods and Fortnum & Mason. 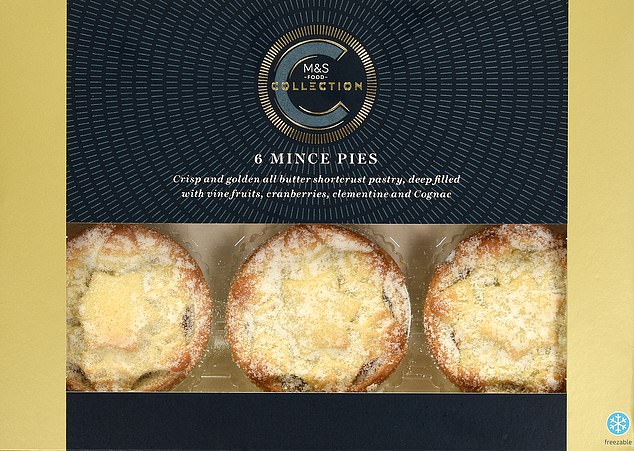 Experts at Which? have named the Marks & Spencer Collection Mince Pies, costing £2.50 for a pack of six – or 42p each – the best of this year’s offerings

The M&S Collection Mince Pies, costing £2.50 for a pack of six – or 42p each – were rated an impressive 87 per cent by an expert tasting panel put together by the consumer magazine.

Stores spend hours on taste tests and recipe tweaks, so M&S will be delighted to know that the Which? experts have praised their pies’ ‘quintessentially Christmassy aroma’, ‘golden, buttery pastry’ and ‘boozy, fruity mincemeat’. 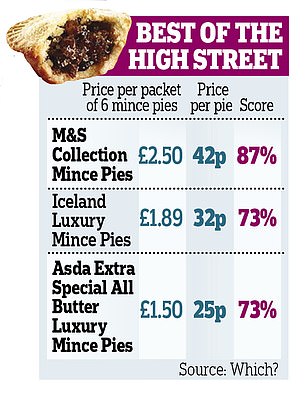 The M&S pies competed against other mainstream stores in blind taste tests, with budget options scoring well too. Second place went to Iceland’s Luxury Mince Pies at £1.89 for six – 32p each – with 73 per cent.

The tasters liked the star decoration and ‘juicy’ mincemeat’. Joint second were Asda’s Extra Special All Butter Luxury Mince Pies at £1.50 for six – just 25p each.

Judges said they delivered on the filling front and were impressed with the ‘moist, well-flavoured’ mincemeat.

Which? added: ‘The most expensive traditional supermarket pies the panel tested in the mainstream category proved a little underwhelming.

‘Waitrose’s No. 1 All Butter Mince Pies at £2.50 for six – 42p each – looked appetising but the mincemeat disappointed.’ One expert described the mincemeat as ‘claggy’.’

Despite the criticism, these achieved a score of 71 per cent, which was significantly better than the lowest scoring mince pies this year, sold by Morrisons and Spar. 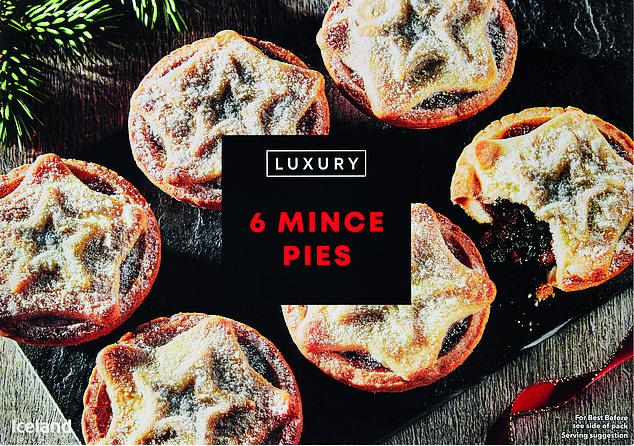 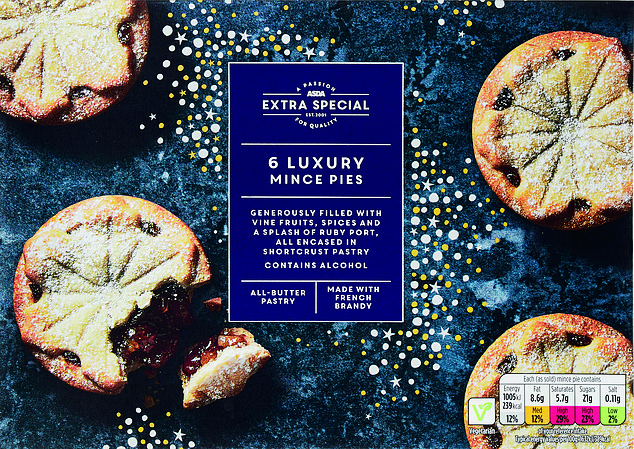 Morrisons’ The Best All Butter Deep Filled Mince Pies at £2 for six – 33p each – scored just 52 per cent. The experts said they lacked ‘distinctive flavour or spicing’ and the pastry was undercooked.

The lowest score of 48 per cent went to Spar’s Luxury All Butter Mince Pies at £2 for six – 33p each. The panel found the pastry was ‘bland and under baked’ and that the ‘overly sweet’ filling was too wet and lacked spice.

The editor of Which? magazine, Harry Rose, said: ‘The smell and taste of a mince pie warm from the oven should be a festive delight. We want to make sure that this moment doesn’t disappoint and that we can help guide you to the very best on offer.’

Drug dealer, 14, was knocked off his moped and ‘butchered’ by...