The Trump administration wants to introduce legislation next year that would require all travelers – including U.S. citizens – to be photographed when entering or leaving the United States.

The proposed regulation, slated to be issued in July by the Homeland Security Department, would be part of a broader system to track travelers as they enter and exit the United States, according to the administration’s regulatory agenda.

The plan has already drawn opposition from some privacy advocates. Jay Stanley, a senior policy analyst with the American Civil Liberties Union, blasted the idea in a written statement on Monday.

‘Travelers, including U.S. citizens, should not have to submit to invasive biometric scans simply as a condition of exercising their constitutional right to travel,’ he said. 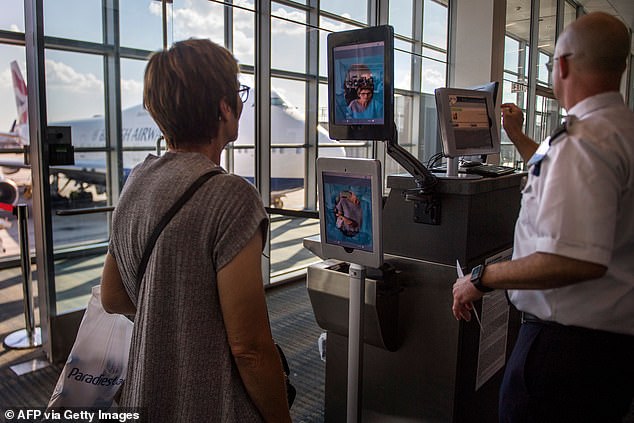 A woman boarding a flight to Copenhagen goes through facial recognition at Dulles International Airport in Dulles, Virginia on September 6, 2018

‘That’s a false argument,’ former New York City Police Commissioner Bernard Kerik told DailyMail.com. ‘The reality is what the administration is trying to do is eliminate people from getting into the country with false documents.’

The Trump administration contends that the face scan requirement will combat the fraudulent use of U.S. travel documents and aid the identification of criminals and suspected terrorists.

The public typically has 30 to 60 days to comment on a proposed U.S. regulation. The federal agency then needs to review and respond to comments, a process that can be time-consuming for major regulations.

The Trump administration also said in its regulatory agenda that it plans to issue a separate fast-track regulation this month that would allow the entry-exit project to move beyond a pilot status.

U.S. Customs and Border Protection, which is part of DHS, has already conducted pilot programs that collect photographs and fingerprints from foreign travelers.

The facial recognition program would scan a traveler’s face before matching with an image in the database, Digital Trends.com reported. Any red flags would be immediately investigated.

‘You can monitor who’s in the country and who left the country,’ Kerik said. ‘I don’t see any negative to it.’

The US Department of Homeland Security is testing facial recognition cameras at the Anzalduas Border Crossing, located at the southern tip of Texas.

It’s being developed at Oak Ridge National Laboratory (ORNL) in Tennessee in partnership with Homeland Security.

The cameras will take photos of people arriving and departing the US and then officials will match the photos with visas and passports.

Few details about the cameras have been released, but they reportedly draw on light sensors to reduce the glass barrier.

This is possible because the cameras work in multiple focal lengths, which could allows it to discern between people and reflections in a car’s windshield. 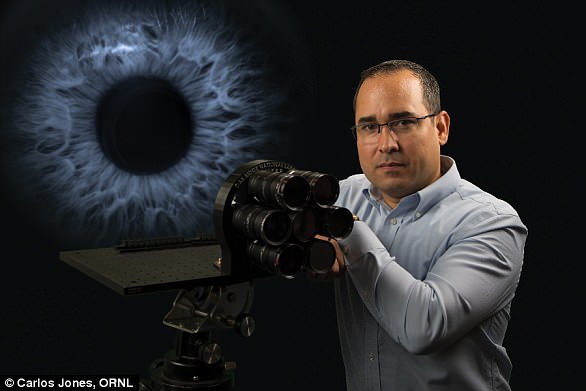 Scientists at ORNL developed a ‘plenoptic camera’ that can capture photos of someone in motion, thanks to sophisticated lenses that show several elements in focus at once, unlike traditional cameras that typically show one object in focus.

The camera is also fitted with a ray-tracing algorithm that can capture the iris of subjects, an extremely accurate biometric identifier, even under challenging conditions.

Officials hope that the facial recognition system can take photos of people inside cars, even if they’re wearing hats or a driver wasn’t looking at the camera. 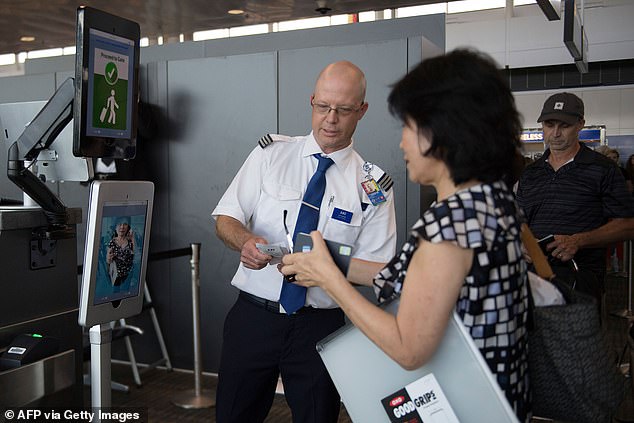 In 2017, US Customs and Border Protection’s Larry Panetta, said at a Border Security Expo, ‘Facial recognition is the path forward we’re working on.

‘We currently have everyone’s photo, so we don’t need to do any sort of enrollment. We have access to the Department of State records so we have photos of US Citizens, we have visa photos, we have photos of people when they cross into the US,’ Panetta told the conference, The Verge reported.

Kerik compared the facial recognition program on the federal level with guests required to show identification and take a photo to gain access into buildings in many U.S. cities.

‘You don’t have people complaining about that,’ Kerik said.

A 2018 internal audit found technical and operational problems during a pilot program at nine U.S. airports. The problems raised questions about whether DHS would meet a self-imposed deadline to confirm all foreign departures at the top 20 U.S. airports by fiscal year 2021.

The non-partisan Pew Research Center estimated in 2006 that 45 percent of immigrants in the United States without legal status entered on a valid visa but did not depart when it expired.

‘The more we enhance and create technology, the more you’re going to see this,’ Kerik said.