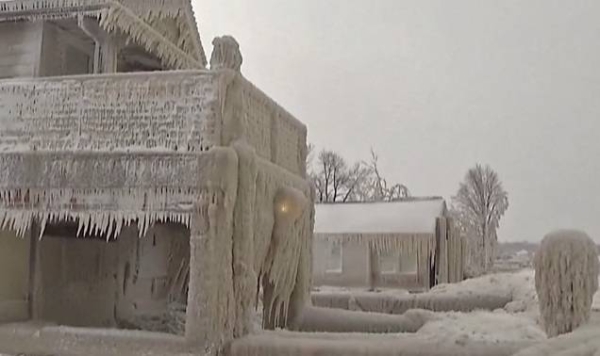 At least 38 deaths have now been linked to a severe Arctic freeze that continues to pummel the US and Canada.

Officials say 34 people died across the US, with the worst-hit area being the city of Buffalo, in New York state.

Four fatalities occurred in Canada when a bus rolled over on an icy road near the town of Merritt, in the western province of British Columbia.

The scope of the winter storm has been unprecedented, stretching from Canada as far south as the Rio Grande.

Forecasters say the storm will ease off in the next few days but the advice remains to avoid travelling unless essential.

The storm has wreaked havoc for days but power has been steadily restored after earlier blackouts.

Fewer than 200,000 customers were without power as of Sunday afternoon EDT, down from a peak of 1.7 million, the Associated Press reports.

Thousands of flights have been cancelled, preventing many people from reaching their families at Christmas.

The “bomb cyclone” winter storm – which occurs when atmospheric pressure plummets, causing heavy snow and winds – has disrupted travel across the US.

New York State Governor Kathy Hochul – a native of Buffalo – said : “This will go down in history as Buffalo’s most devastating storm.”

“It is [like] going to a war zone and the vehicles along the sides of the roads are shocking,” she told reporters on Sunday evening.

Residents still faced a “very dangerous life-threatening situation” and anyone in the area should remain indoors, she said.

Twelve deaths were confirmed in Erie County, with some victims found dead in cars or snow banks.
Storm-related deaths were also reported in Vermont, Ohio, Missouri, Wisconsin, Kansas, and Colorado. South Florida’s temperatures dropped so low, that iguanas froze and fell from trees.

The western US state of Montana is the worst hit by the cold, with temperatures dropping to -50F (-45C).

In Canada, the provinces of Ontario and Quebec are bearing the brunt of the storm.

In Quebec almost 120,000 customers were without electricity on Sunday. Officials say it could take some days for some households to be reconnected.

Russia Orders Tens of Thousands of Southern Ukrainians to Relocate