A hero dog led rescuers to his 84-year-owner who had been missing for a week after a manhunt by emergency services had failed to locate the pensioner.

Gregorio Romero left his house to go for a walk but got lost in the desert sparking a search and rescue mission but after days of looking police were unable to find him.

When the major manhunt, which even included sniffer dogs, was unable to find Mr Romero, his faithful pooch El Palomo succeeded where they had failed.

The two-year-old mongrel led rescuers to him after crossing over hills, paths and ravines to where Mr Romero was lying in the Sonora Desert.

Gregorio was found just 1.9 miles (3km) from his home on December 4.
He had vanished on November 27 after leaving his property in Moctezuma, Sonora State, Mexico.

Members of the National Guard, the Municipal Police, the Municipal Civil Protection Unit, and even a trained sniffer dog unit had tried and failed to find him.

Family members reported him missing four days after he vanished.

In the past, it was not uncommon for Gregorio to visit nearby villages in the area and return a few days later so relatives were not initially concerned for his safety.
However, his niece Ramona began to worry after a few days passed as Gregorio sometimes suffered with memory loss.

A week had passed when the authorities decided they had exhausted all their efforts and finally turned to the missing OAP’s loyal dog. 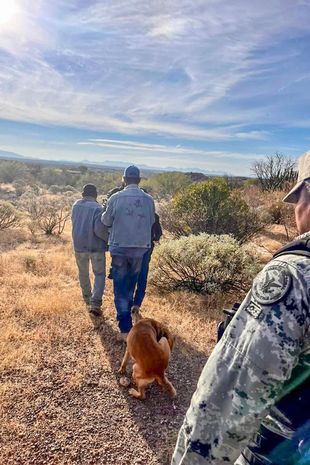