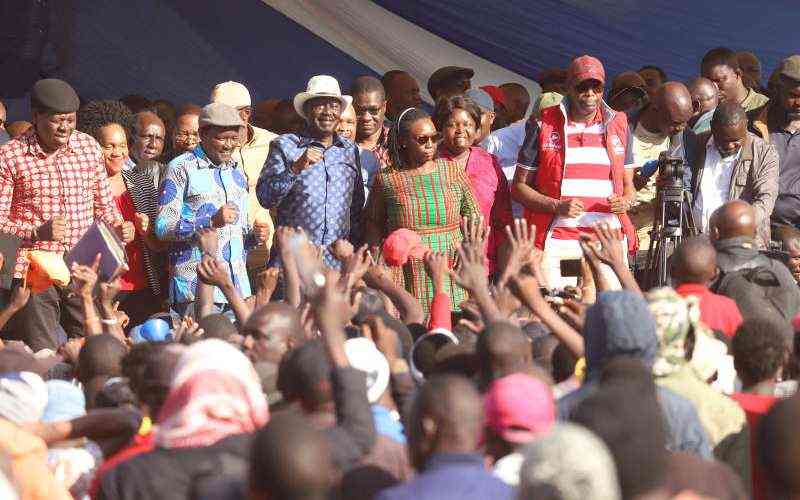 The conduct of the August 2022 general elections will be at the top of Azimio la Umoja’s agenda its leader Raila Odinga addresses a “comeback” political rally at Kamkunji grounds in Nairobi today.

Captained by ODM leader Raila Odinga who will be arriving in the country from South Africa today, Azimio had earlier promised to provide more details on the allegations that the elections were bungled and that Raila had won with 57.3 per cent of the vote while Ruto garnered 41.6 per cent.

On Wednesday Jubilee Secretary General Jeremiah Kioni said that revelations from an anonymous whistle-blower working at IEBC have it that under the direction of the commission’s Chairman Wafula Chebukati, commissioners, Prof Abdi Guliye and Boya Molu, and CEO Marjan Hussein, IEBC provided fabricated information concerning the election to the Kenyans.
If the public meeting that Azimio calls “People’s Baraza consultations” is anything like the first one on December 7, 2022, then a brutal tearing into of the performance of the Ruto administration is expected.

The coalition political party has in the past hit out at the government for suggesting that their meetings with the public were intended to be demonstrations.

Azimio now calls the public to come in large numbers and attend the rally which is normally decorated with loud contemporary music often with a political tone, an enthralling MC and politicians.

Karua accused the current regime of impunity and use of force arguing that it has taken control of different arms of government to push through its agenda. She argued that the push to ouster the four IEBC Commissioners was out of political vendetta because they rejected the August 9 election that declared Ruto as president.

Karua argued that it was within the commissioners’ rights to denounce the results.

At the time, the Azimio team argued that the government had side-lined the needs of the citizen and had resorted to rewarding allies and those who lost in the previous election, with positions in government.

With the ordinary citizen battling a harsh economic environment occasioned by inflation and high cost of living, politics has now taken a different turn with both the government and opposition settling their scores on the election issue.

3 football players killed, in mass shooting at University of Virginia

Multiple people killed and injured in a shooting at a Walmart...