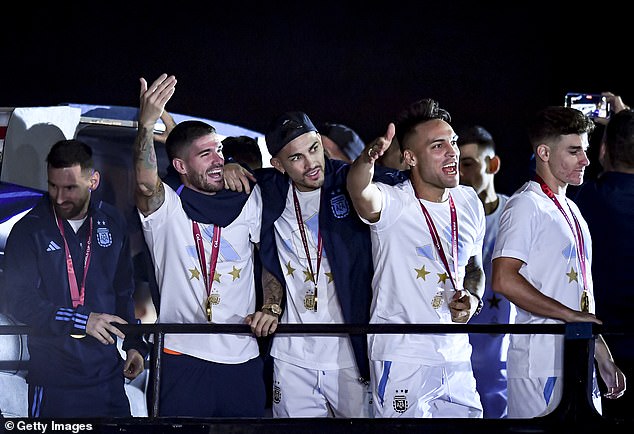 Thousands lined up in the middle of the night in Buenos Aires to welcome Argentina’s world champions back home.

Lionel Messi was all smiles as he exited the plane, proudly lifting the iconic gold World Cup trophy.

Coach Lionel Scaloni put his arm around the superstar as they walked past a sign which read ‘Thank you, champions’.

A red carpet had been rolled out for the squad while local rock band La Mosca played Muchachos – a song that became Argentina’s unofficial anthem during the tournament.
Today is set to be one of celebration across the South American country, with president Alberto Fernandez declaring it a national holiday.

The world champions went from the plane to an open-top bus waiting to take them to the headquarters of the Argentine Football Association.

It moved at a snail’s pace as fans waving Argentine flags swarmed towards it.
Messi and the players slept at AFA headquarters for a few hours but they will soon board the bus again to take them to the famous Buenos Aires landmark, the Obelisk.

The monument saw seas of people rejoicing at Argentina’s first World Cup win since 1986 on Sunday.

The celebrations went on into the next day, with street parties seen all over the country.

Some 200,000 people tracked the team’s plane online to see when it would arrive in the capital city.
The World Cup has brought much-needed good news for a country suffering from one of the world’s highest inflation rates, and where almost four in 10 people live in poverty.

‘Thank you for this greeting President Putin,’ Mr Fernandez wrote on Twitter after a telephone call with the Russian leader.

‘Let the happiness that today unites Argentina with so many countries in the world serve as an example: Our societies need unity and peace.’