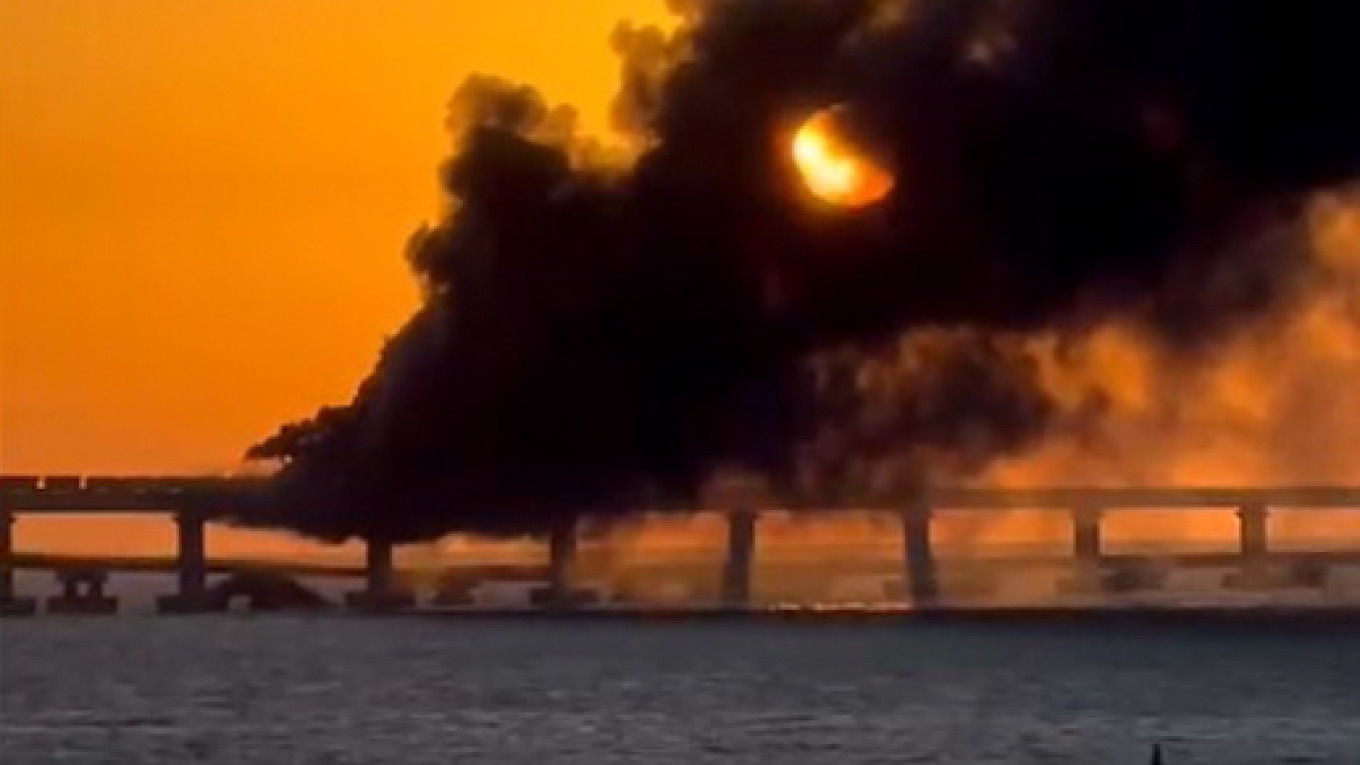 A giant fire sparked by a car bomb has broken out on a key bridge linking Crimea to Russia, which annexed the territory in 2014, Moscow said Saturday, without immediately blaming Ukraine.

The road-and-rail bridge, built on the orders of Russian President Vladimir Putin and inaugurated in 2018, was a key transport link for carrying military equipment to Russian soldiers fighting in Ukraine, especially in the south, as well as ferrying troops across.

Spanning the Kerch Strait, it is the only crossing between occupied Crimean territory and Russia.

“Today at 6:07 a.m. [03:07 GMT] on the road traffic side of the Crimean bridge … a car bomb exploded, setting fire to seven oil tankers being carried by rail to Crimea,” Russian news agencies cited the national anti-terrorism committee as saying.

The Kremlin spokesman said Putin had ordered the establishment of a commission to look into the blast, Russian news agencies reported.

The head of the Russian-installed regional parliament in Crimea, Vladimir Konstantinov, blamed it on “Ukrainian vandals.”

Russia had maintained the bridge was safe despite the fighting in Ukraine but had threatened Kyiv with reprisals if it was attacked.

If it is established that Ukraine was behind the blast, it is a matter of serious concern for Moscow as the bridge is far from the front line.

There have been several explosions at Russian military installations in the Crimean peninsula.

Ukraine’s recent lightning territorial gains in the east and south have undermined a claim from the Kremlin last week that it annexed Donetsk, neighboring Luhansk and the southern regions of Zaporizhzhia and Kherson.

The four territories create a crucial land corridor between Russia and the Crimean peninsula, and together make up around 20% of Ukraine.

Russia’s investigative committee said it had “initiated a criminal case in connection with the incident on the Crimean bridge,” adding that “a truck was blown up.”

“According to preliminary information, this morning on the automobile part of the Crimean bridge from the side of the Taman Peninsula, a truck was blown up, which caused seven fuel tanks to ignite on a train heading toward the Crimea peninsula,” the committee said.

Dramatic videos on social media showed the giant bridge — hugely important to the Kremlin — on fire and partially collapsed into the sea.

The investigative committee said it had sent detectives to the scene.

“Investigators of the Russian Investigative Committee are establishing all the circumstances of the incident and persons involved in the crime.”