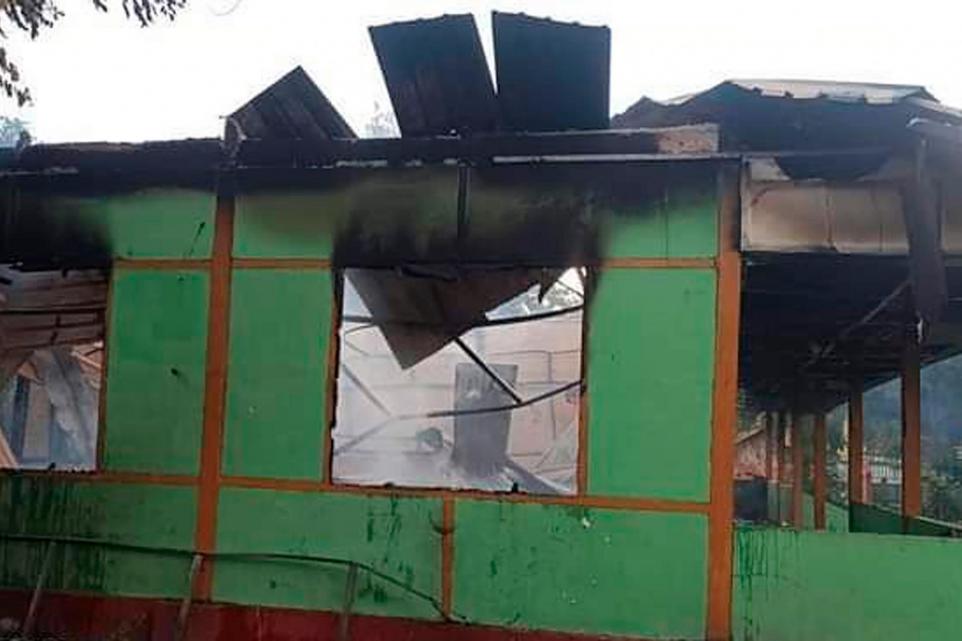 The decapitated body of a high school teacher was left on grotesque display at a school in central Myanmar after he was detained and killed by the military, witnesses said Thursday, marking the latest of many abuses alleged as the army tries to crush opposition to military rule.

According to witnesses’ descriptions and photos taken in Taung Myint village in the rural Magway region, the headless body of 46-year-old Saw Tun Moe was left on the ground in front of the school’s spiked gate and his head was impaled on top of it. The school, which has been closed since last year, was also burned.

Neither the military government nor the state-controlled media have released information about the teacher’s death.

Myanmar’s military has arrested tens of thousands of people and been blamed for the deaths of more than 2,300 civilians since seizing power last year from the elected government of Aung San Suu Kyi.

“We are appalled by reports that Burma’s military regime arrested, publicly mutilated, and beheaded a schoolteacher in Magway Region,” U.S State Department spokesperson Ned Price said on Twitter. “The regime’s brutal violence, including against educators, demands a strong response from the international community.” The United States officially refers to Myanmar by its old name, Burma, which was changed by a previous military government.

In September, at least seven young students were killed in a helicopter attack on a school in a Buddhist monastery in the Sagaing region in north-central Myanmar. The military government denied responsibility for the attacks. The U.N. has documented 260 attacks on schools and education personnel since the army takeover, the U.N. Child Rights Committee said in June.

Myanmar has been in turmoil since the military’s February 2021 seizure of power was met by nationwide peaceful protests and civil disobedience that security forces suppressed with deadly force. The repression led to widespread armed resistance, which has since turned into what U.N. experts have characterized as a civil war.

The army has conducted major offensives in the countryside, including burning down villages and driving hundreds of thousands of people from their homes, allowing them little or no access to humanitarian assistance.

Myanmar’s military has long been accused of serious human rights violations, most notably in the western state of Rakhine. International courts are considering whether it committed genocide there in a brutal 2017 counterinsurgency campaign that caused more than 700,000 members of the Muslim Rohingya minority to flee to neighboring Bangladesh for safety.

The slain teacher, Saw Tun Moe, was a longtime educator who had participated in anti-military protests before taking charge of a high school founded by the country’s pro-democracy movement in his native Thit Nyi Naung village.

The National Unity Government, an underground organization opposed to military rule that styles itself as the country’s legitimate administrative body, opened a network of schools this year as an interim education system in parts of the country where it believed armed militias loyal to it were strong enough to defend themselves.

Saw Tun Moe also taught mathematics at his village school and another nearby alternative school and was involved in the administration of Thit Nyi Naung, where he lived with his family. He previously taught at a private school in Magway, also known as Magwe, for 20 years.

The NUG’s education arm mourned his death in a statement late Thursday that praised him and other fallen teachers as “revolutionary heroes” and expressed solidarity with the teachers and students who continue their resistance to the military.

His death occurred as a column of about 90 government soldiers carried out sweeps of at least a dozen area villages this month.