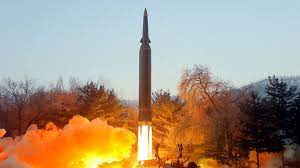 Kim Jong-un’s regime has launched several missiles in recent days week, including an intercontinental ballistic missile (ICBM), leading Washington and Seoul to step up a joint show of military strength in the region.

Pyongyang’s slew of missile launches has raised fears that Mr Kim is preparing to resume nuclear testing for the first time since 2017.

A new type of banned ICBM was among three missile tests on Thursday, forcing Japan to issue evacuation alerts and halt trains – though South Korean officials said the launch failed.

The US and South Korea have extended military exercises in response to the tests, with the US Air Force reportedly planning to deploy B-1B bombers on Saturday afternoon.

South Korea‘s Defense Ministry said at least one B-1B bomber will participate on what is scheduled to be the last day of the joint air force exercise.

The “Vigilant Storm” exercise, which has involved about 240 warplanes, including advanced F-35 fighter jets from both countries, has triggered an angry reaction from North Korea.

North Korea‘s Foreign Ministry late on Friday described its tests as an appropriate response to Vigilant Storm, which it called a display of US “military confrontation hysteria.”

It said North Korea will respond with the “toughest counteraction” to any attempts by “hostile forces” to infringe on its sovereignty or security interests.

South Korean officials say there are indications North Korea in coming weeks could detonate its first nuclear device since Mr Kim imposed a moratorium on atomic testing in 2017 amid hopes of US sanctions relief.

US defence secretary Lloyd Austin on Friday warned Pyongyang that any nuclear attack on America or allied nations would spell the end on the Kim regime. Experts say North Korea is attempting to force the US to accept it as a nuclear power and seeks to negotiate economic and security concessions from a position of strength.

In a statement on Friday, North Korea‘s Foreign Ministry said the United States and South Korea had created a seriously “unstable atmosphere” in the region with their military exercises. It accused the United States of mobilising its allies in a campaign using sanctions and military threats to pressure North Korea to unilaterally disarm.

COPE members physically attack each other during their media briefing