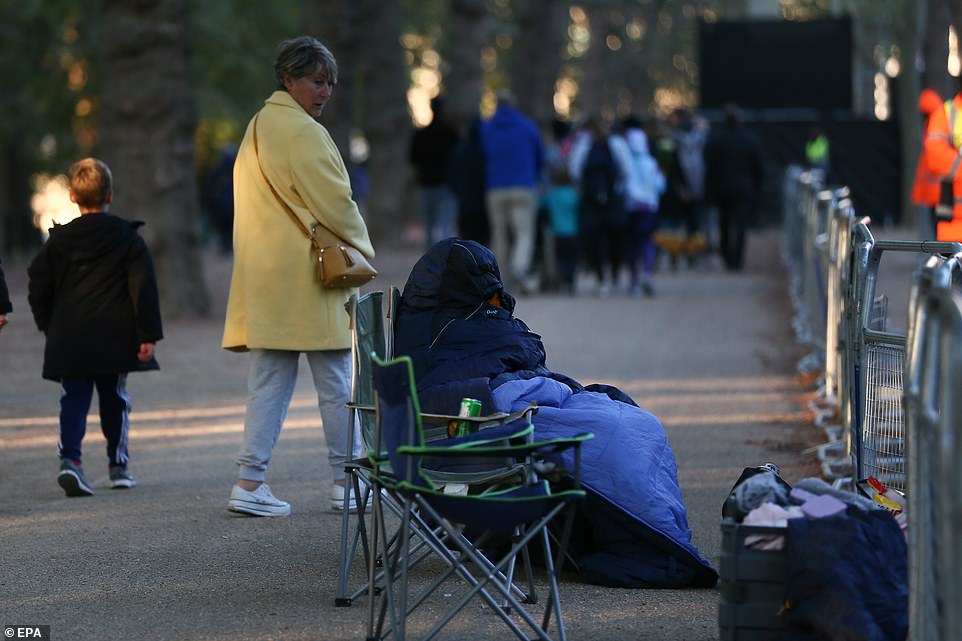 Royal fans wrapped up in sleeping bags and jumpers as they camped out on The Mall overnight amid plunging temperatures to bag their spot outside Buckingham Palace ahead of the Queen’s state funeral – while thousands more queue to see the late monarch lying-in-state.

Palace officials yesterday extended the route of the Queen’s final journey from Westminster Abbey on Monday – the site of her funeral between 11am and 12pm – to Windsor Castle, her final resting place, to enable more people to bid her farewell.

First the Queen’s coffin will be borne by an extraordinary procession of the State Gun Carriage through London to Wellington Arch, where it will be transferred to the State Hearse at 1pm. Other members of the Royal Family will then travel along the M4 to Windsor, where a second ceremony will be held at St George’s Chapel.

But if the former monarch had been driven via the motorway, mourners wanting to say their goodbyes would have been unable to line the route.

The Daily Mail’s Robert Hardman was among those saying earlier this week that the post-funeral route should be extended so more Britons could say farewell. Now the palace has disclosed the route. From Wellington Arch, it will go along the south side of Hyde Park via South Carriage Drive before turning down Queens Gate, and then along Cromwell Road.

The cortege will follow the A4 through west London, going along Talgarth Road via the Hammersmith Flyover, and along the Great West Road.

Just before Heathrow, the hearse will switch to the A30 Great South West Road, and travel around the south side of the airport.

It will process along London Road, still the A30, and Staines Road, before crossing the M25 to Windsor Road (the A308) for the final leg to Windsor along a countryside stretch of the River Thames. The route will take the Queen’s coffin through 25 miles of London streets and villages in Surrey and Berkshire. Last night a Buckingham Palace spokesman said: ‘The route to Windsor is planned with the public in mind.’

COPE members physically attack each other during their media briefing