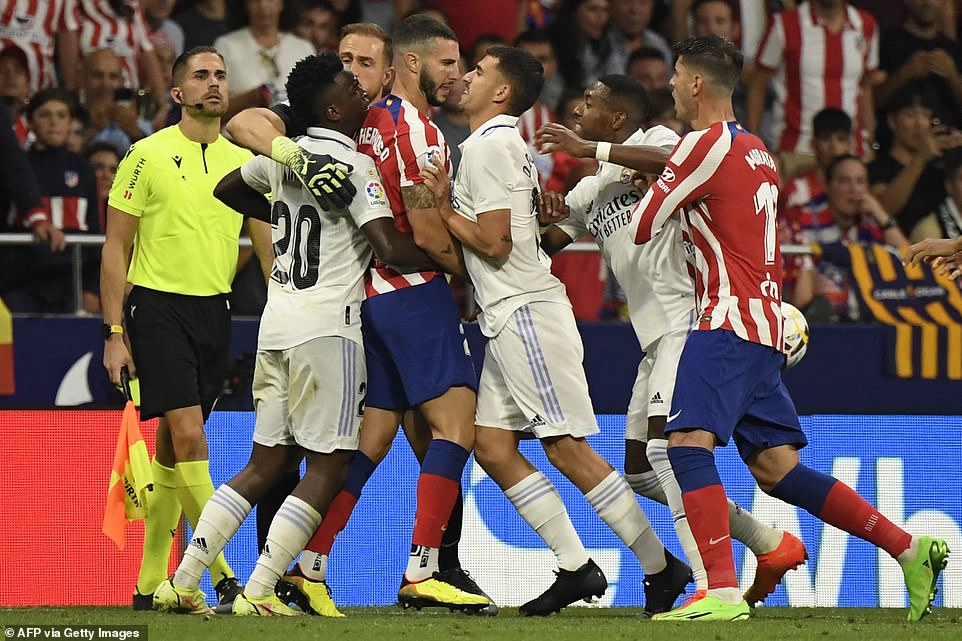 Real Madrid went back to the top of LaLiga with a 2-1 win over Atletico Madrid as Diego Simeone’s side dropped eight points behind their neighbours.

Atletico started the game well but in two attacks Carlo Ancelotti’s side got themselves in front and there was no way back for them in the second half.

First on 18 minutes Rodrygo and Aurelien Tchouameni played a delightful long one-two with the Frenchman lofting the ball over the top of Atletico’s defence for the Brazilian to send it spinning into the net.

Jan Oblak had not touched the ball and he head already been beaten. On 35 minutes he got a hand to the ball but it was only to parry Vinicius’ shot, which came at him off the post, into the path of Fede Valverde who scored to make it two.

Atletico were shell-shocked. They had gone for their opponents with Antoine Griezmann making his first start and Yannick Carrasco and Marcos Llorente playing high-up the pitch as flying wing-backs.

Thibaut Courtois looked uncharacteristically nervous punching at one Atletico corner and Felipe headed another just over. But for all the attacking threat Madrid had held firm and did the damage on the break.

Atletico finally got a foothold back into the game when substitute Mario Hermoso scored from a corner in the 83rd minutes. The ball went in off of his shoulder after both Eder Militao and Courtois had gone for the ball and not managed to clear it.

The defender didn’t know too much about how he had scored but he had given his team a fighting chance going into the last seven minutes plus time added on. Diego Simeone could be seen telling his players to keep their heads as the clock ticked down – he knew what was coming.

Dani Carvajal was booked for a tired late challenge on Reinildo Mandava and goalscorer Hermoso came screeching across to go face to face with the Madrid right-back.

Carvajal was booked but so was Hermoso and the melee that followed only served to break up the home side’s rhythm. Hermoso then paid a further penalty for his indiscretion.

He was harshly judged to have butted Dani Ceballos at a corner and the referee took out the yellow again and sent him off. There had been no no contact and it was hard for the home time to take.

There was very little time left and Atletico now had just ten on the pitch to work a miracle that never came.

‘They took their chances,’ said Simeone. ‘We were more aggressive in the second half and we made a huge effort. We were close to drawing but they defend so well. They defend deep, but they do it so well.’

That last comment seemed to be a reaffirmation of the football that he really believes in – defending deep and hitting teams on the break. Not for the first time he had been given a taste of his own medicine. 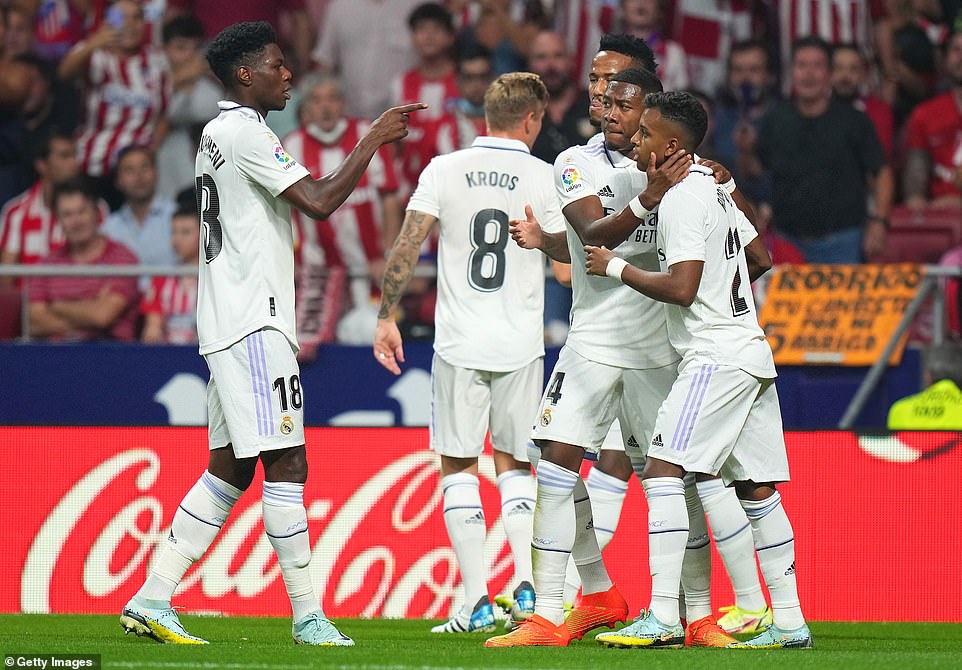 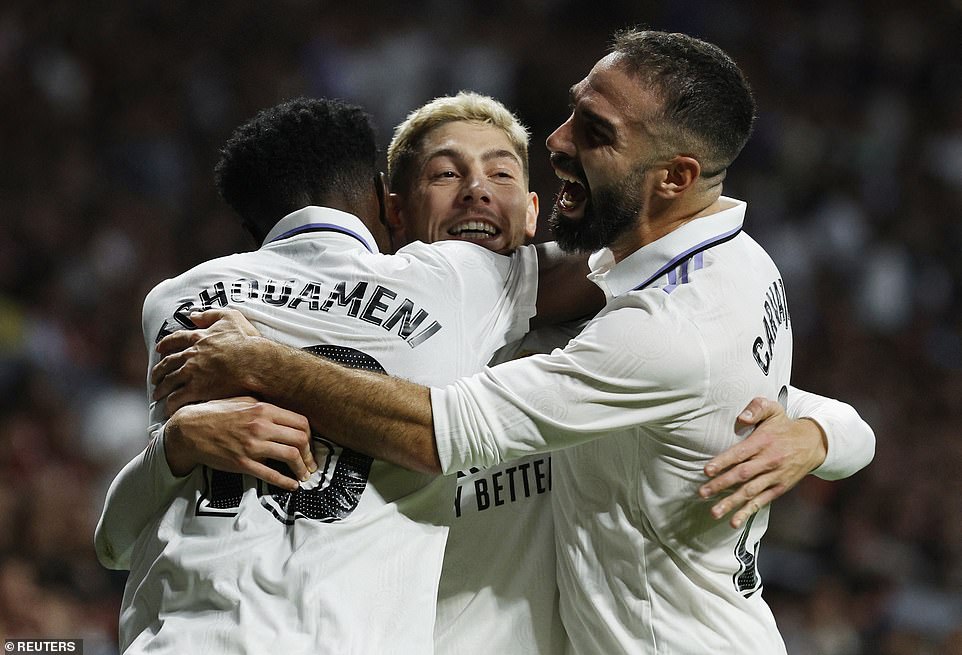 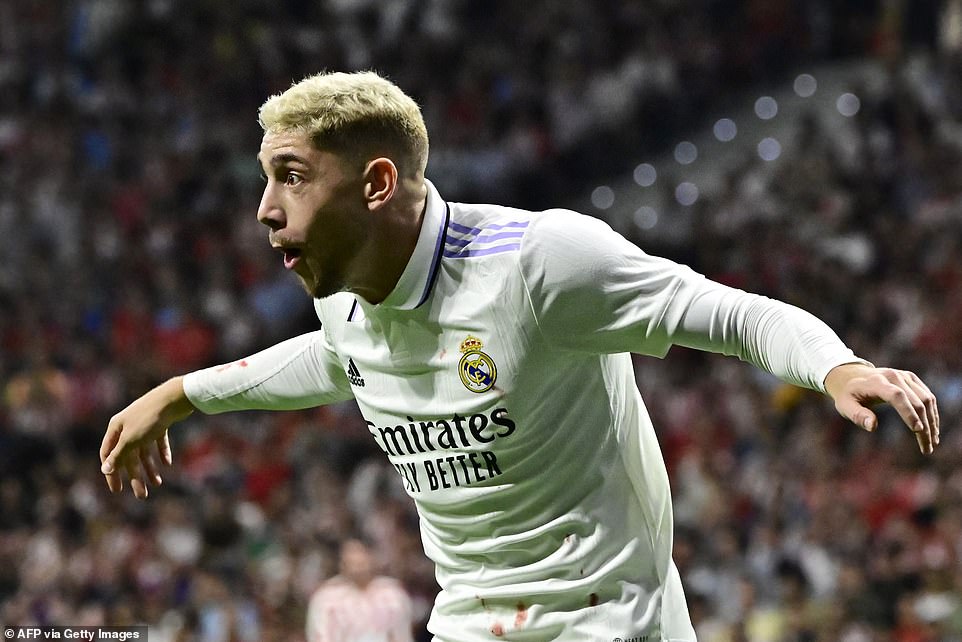 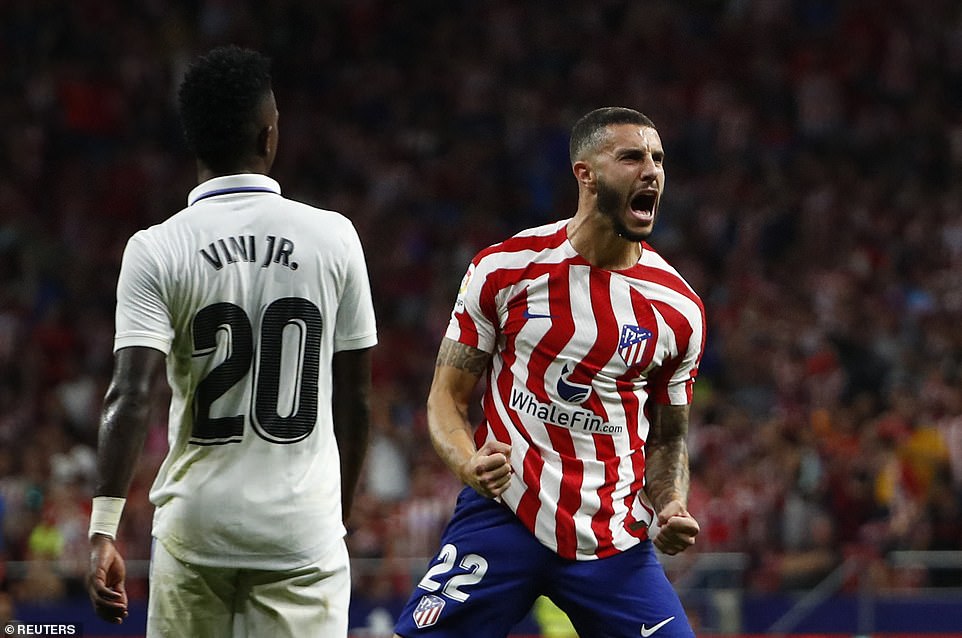 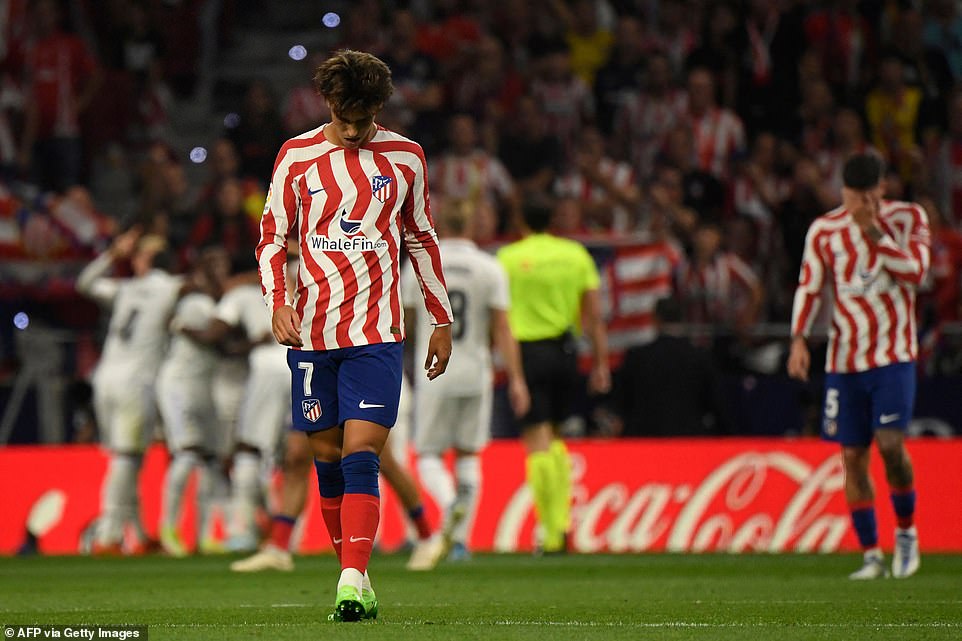 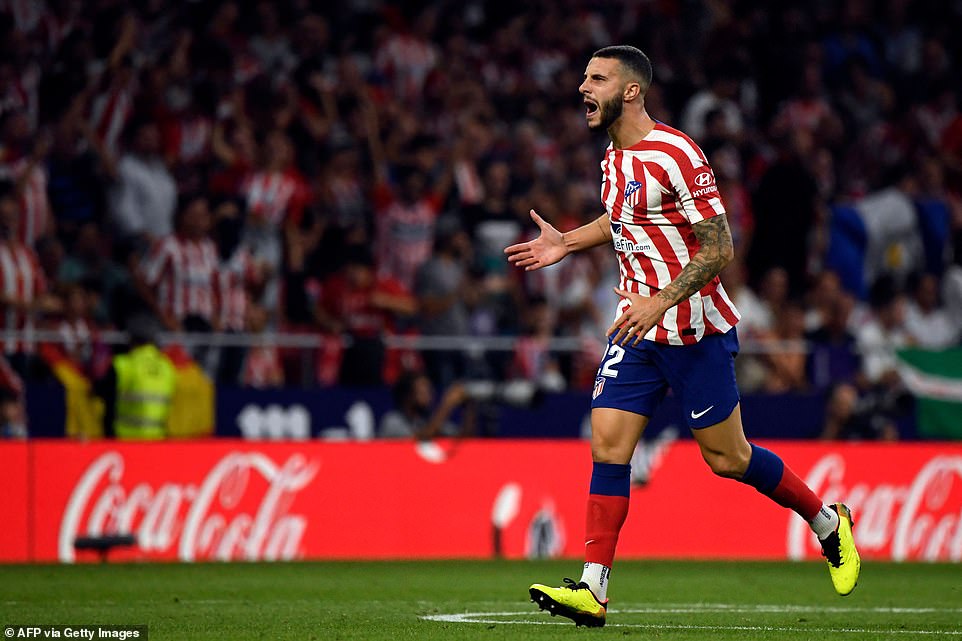 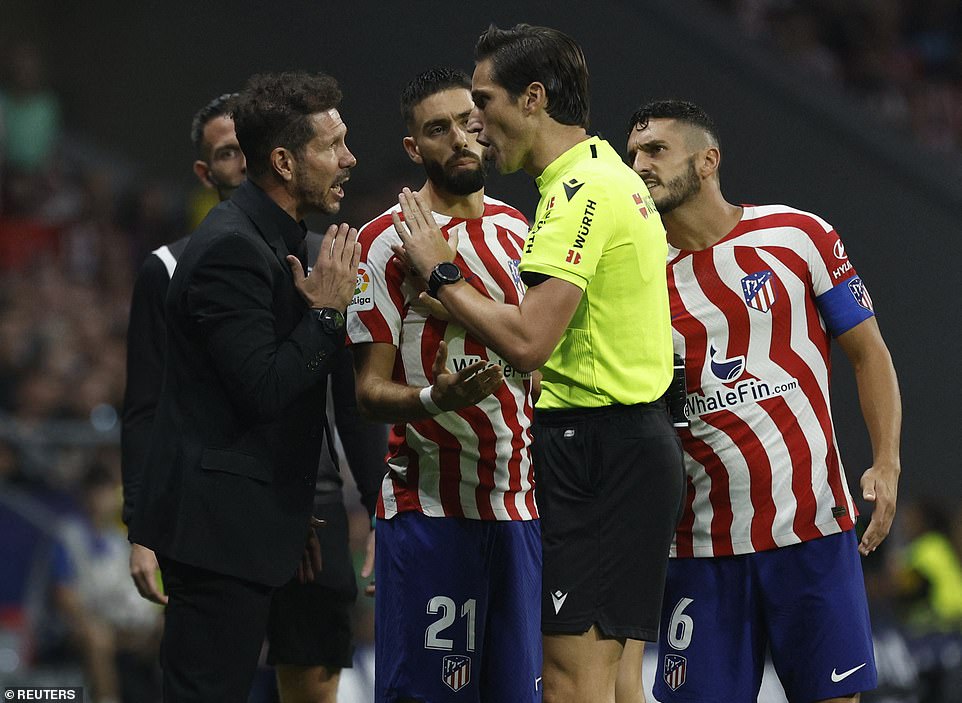 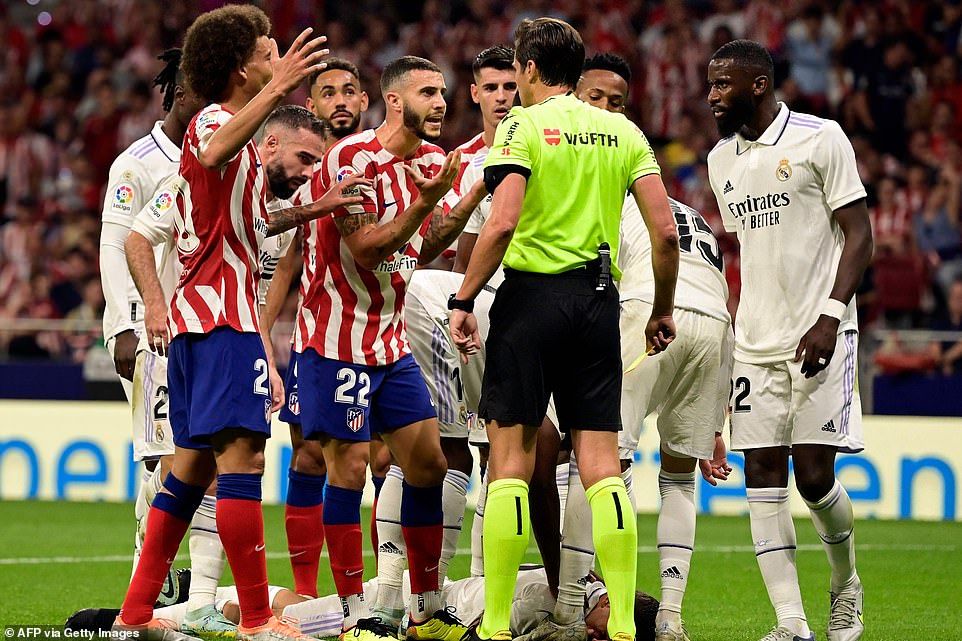