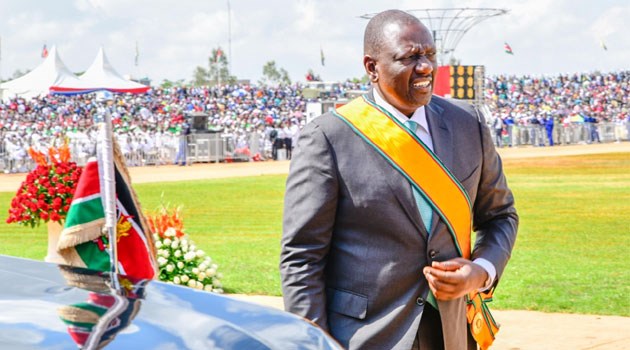 Deputy President William Ruto has been declared President-Elect after sailing past the ‘50 per cent plus one’ constitutional threshold that requires a winner in a presidential election to garner 50 per cent of votes cast and an additional vote to avoid a runoff.

Odinga, a veteran opposition leader, was making his fifth stab with the backing of the ruling Jubilee Party led by President Uhuru Kenyatta.

The declaration of Ruto as President-Elect was made by the Independent Electoral and Boundaries Commission (IEBC) after a nearly 6-day tallying exercise at the National Tallying Center at Bomas of Kenya in Nairobi.

Of the 47 counties, the leader of the Kenya Kwanza Alliance garnered over 25 per cent of the vote in 39 counties.

IEBC Chairperson Wafula Chebukati, who addressed the nation at 6pm, three hours after an earlier slated time, said Ruto also garnered 25 per cent of votes in twenty-four counties in line with the requirement to secure the threshold in half of the counties.

Chebukati who said he had been intimidated and harassed said tow of his commissioners — Boya Molu and Abdi Guliye — were injured. He said Hussein Marjan had also sustained injuries form skirmishes at the National Tallying Center.

The delay was occasioned by a standoff after Azimio Chief Agent Saitabao Ole Kanchory declined to sign the results form citing unverified intelligence reports that the election was compromised.

“IEBC officials actually committed electoral offences and some of them ought to have been arrested if they were not arrested,” Kanchory claimed adding he was not in a position to ask his candidate to honour the IEBC’s invitation.

An hour after Kanchory’s announcement four IEBC commissioners led by Vice Chairperson Juliana Cherera convened a press conference said they could not endorse the results verification process describing it as ‘opaque’.

“We’re here because of the opaque nature of how this phase has been handled and we cannot take ownership on the results that will be announced,” Cherera stated flanked by Commissioners Francis Wanderi, Irene Cherop and Justus Abonyo.

Ruto had arrived at the National Tallying Center moments before 3pm accompanied by mots of his allies including the Second Lady Rachel Ruto, running mate Rigathi Gachagua and ANC leader Musalia Mudavadi.

Ruto’s mother Sarah Cheruiyot made her way to Bomas at 4pm joining family members who had arrived earlier.

The Deputy President, who will make history as the first second in command to succeed his boss after an election, campaigned on an economic recovery platform, promising to adopt a bottom-up model which would seek to empower ‘hustlers’ and end the dominance of ‘dynasties’.

Drawing his past as a chicken seller at a railway crossing in Eldoret before joining politics, Ruto presented himself as a hustler who understood Kenya’s most pressing challenges including the high cost of living.

Ruto, who soared to the nation’s second highest position as the country’s inaugural Deputy President in 2013, has had a turbulent time in office in his second term after President Kenyatta, once a sworn ally who even vowed to back his presidential bid, launched an onslaught against the UDA leader and his camp that saw them expelled from the ruling Jubilee Party.

Kenyatta’s support for Odinga was a culmination of a 2018 truce during which the two leaders detailed a cooperation pact that saw them spearhead a constitutional review process christened the Building Bridges Initiative (BBI) that was invalidated by the Constitutional Court (2020) in a decision upheld by both the Court of Appeal (2021) and the Supreme Court (2022).

The fallout between Kenyatta and Ruto saw the Deputy President earn the tag of the de facto leader of opposition after being increasing side-lined in government in a fierce onslaught led by President Kenyatta, a leader he passionately campaigned for thrice, twice under the Jubilee Coalition which ascended to power in 2013.

The Uhuru-Ruto bromance birthed on December 2, 2012 when the duo led their respective parties TNA and URP in sealing a pre-election deal faded away and replaced by dramatic public attacks characterized with hate.

The escalating war within the Jubilee Party formed after the two leaders folded their parties and over a dozen other political outfits saw Ruto’s allies striped of their lucrative positions both in Cabinet and Parliament.

The Deputy President remained a fierce critic of the ‘handshake’, a deal sealed between President Kenyatta and Odinga in March 2018, often blaming it for Jubilee administration’s failure in the second term.

He led his camp in resisting the BBI constitutional review process co-led by President Kenyatta and Odinga much to the annoyance of his boss.

By 2019, Ruto’s allies were protesting over the withdrawal their security detail with Kiambu Governor Ferdinand Waititu, Nakuru Senator Susan Kihika, MP Kimani Ichung’wah of Kikuyu blaming the State for targeting them over their support for the DP.

In May 2020, Ruto’s allies were demoted from powerful positions in the Senate in changes sanctioned by President Kenyatta. The changes saw Senators Kipchumba (Elgeyo Marakwet) Murkomen and Susan Kihika (Nakuru) lose the Majority Leader and Majority Whip slots.

In August 2021, the escalating war in government saw Ruto’s security downscaled with the National Police Service recalling the elite GSU guard at the Deputy President’s residences, including the official government residence in Karen, replacing them with Administration Police.

In February 2022, Ruto was replaced as the Deputy Party Leader in Jubilee months after being declared persona non grata at the party’s headquarters.

The party proceeded to unveil Odinga as its preferred presidential candidate.