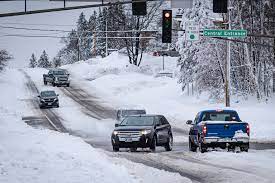 A major arctic blast is plunging temperatures to dangerous levels in much of the country and a developing “bomb cyclone” is set to unload heavy snow and blizzard conditions especially in the Midwest on Thursday and Friday – a combination making for a perilous few days leading up to Christmas.

The cold air and storm are affecting nearly every state in some way: More than 110 million people coast-to-coast were under winter-weather alerts for snow or icy conditions Thursday morning, the National Weather Service said.

And more than 150 million people – or nearly half of the US population – were under wind-chill alerts from the Canadian border to the Mexican border and from Washington state to Florida, with below-zero wind chills recorded as far south as Texas on Thursday morning and expected to reach the Southeast by Friday.
“Life-threatening wind chills over the Great Plains (will) overspread the eastern half of the nation by Friday,” the Weather Prediction Center said – and wind chills below minus 50 degrees already have been reported in the past two days in parts of Montana, South Dakota and Wyoming.
Some low temperature records were set Thursday morning in the West and South, and in some cases they dropped this week with record-breaking speed: Denver International Airport saw a 37-degree plunge over one hour Wednesday, preliminarily the biggest one-hour drop recorded there, according to the National Weather Service.
Snow, meanwhile, has been hitting parts of the West and is expected in the next two days across much of the country’s eastern half.

A major snowstorm is shaping up for the Midwest and Great Lakes especially – with widespread light to moderate snowfall – but with powerful winds that may make for impossible travel conditions.

“Heavy snowfall rates” of 1 to 2 inches per hour, “along with wind gusts of over 50 mph will result in near-zero visibility and considerable blowing and drifting of snow,” the prediction center said.

The storm is expected to become a “bomb cyclone” – a rapidly strengthening storm that drops a certain amount of pressure within 24 hours – Thursday evening into Friday, reaching the pressure equivalent of a Category 2 hurricane as it moves into the Great Lakes. This could be “a once in a generation type of event,” a forecaster in the weather service’s Buffalo office wrote Tuesday, after noting that kind of strengthening doesn’t often happen in the lower Great Lakes.

More than 2,000 flights have been canceled across the US on Thursday, according to the flight tracking site FlightAware, snarling air travel amid the busy holiday season. And airlines have canceled more than 1,000 US flights scheduled for Friday.
In South Dakota, a 340-mile stretch of Interstate 90 was closed in both directions Thursday morning, from Rapid City to Sioux Falls, because of blizzard-like conditions, officials said. Near-zero visibility also led to many highway closures between Colorado and Wyoming on Wednesday.

Even Florida won’t be spared, with residents of the Sunshine State expected to see sudden temperature drops Friday. Some cities in the South – including Nashville and Memphis – are expected to see snow Thursday.

King Charles to address a nation in mourning