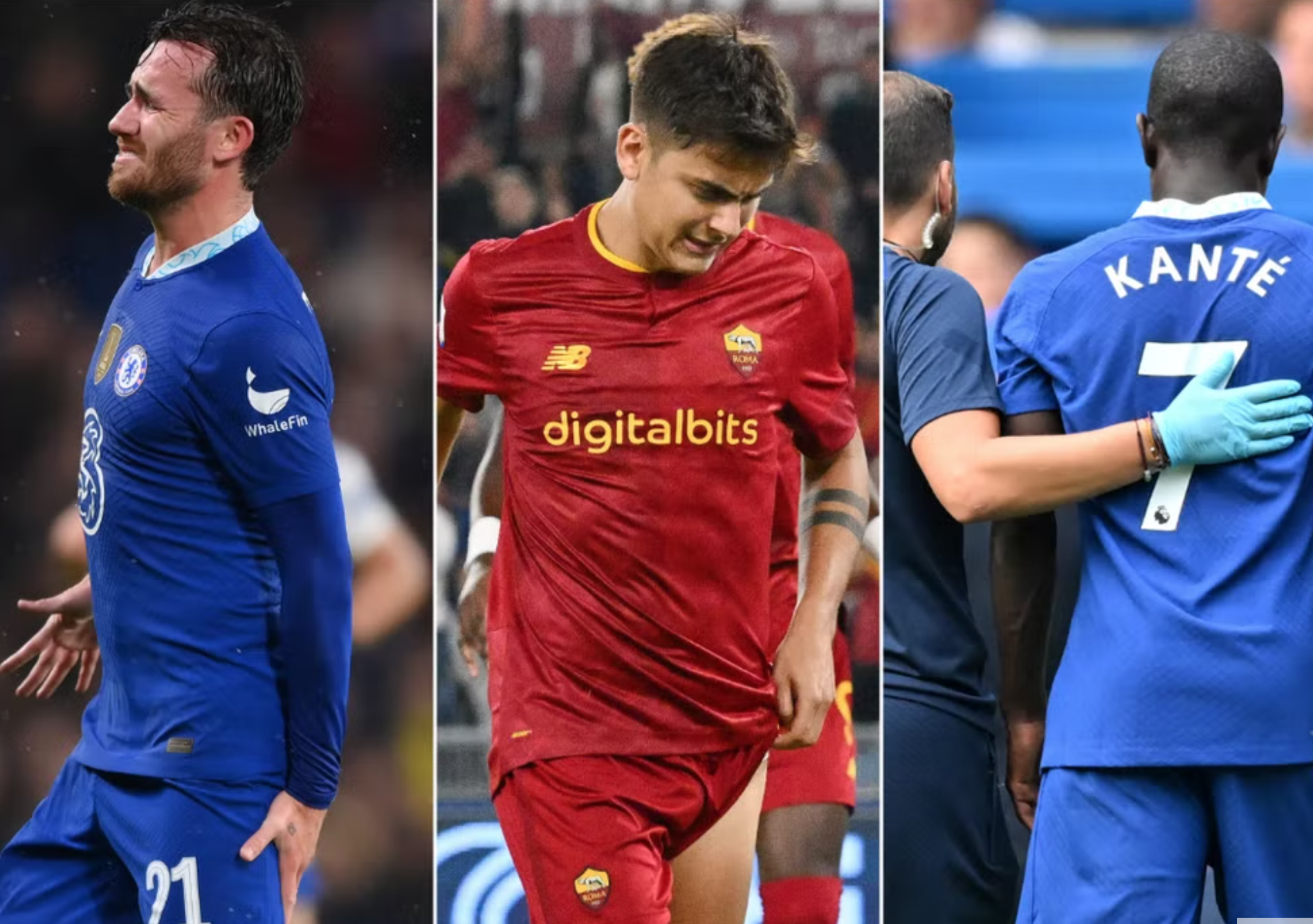 The staging of a Fifa World Cup partway through the domestic seasons of many major leagues was always likely to be a problematic one for many reasons – not the least of which is the propensity for players missing out due to injuries.

While a handful suffering tournament absences is nothing new, the issue is exacerbated this time around because club matches will be continuing right up until a week before Qatar 2022 gets underway, with more matches crammed in and less recovery time for players beforehand too.

Unfortunately, a host of names are already confirmed as being out – while more are being added to the list of those racing against time to rediscover fitness with each passing round of fixtures.

That includes at least two players who could make Gareth Southgate’s England squad, with Chelsea’s Ben Chilwell the latest to be dealt a fitness blow.

Here’s a run-down of the players definitely out, and a regularly updated list of those who are facing an uphill battle to make it back in time.

Definitely out of Qatar 2022
Paul Pogba: The midfielder was at the heart of France’s World Cup win four years ago in Russia but will miss out with a long-standing knee injury.

N’Golo Kante: Formed the core of the France side of 2018 alongside Pogba but has undergone surgery on a hamstring injury and will not be in Qatar.

Diogo Jota: The Liverpool forward has become a key performer for Portugal, but a serious calf injury sustained against Man City means he faces months on the sidelines.

Gini Wijnaldum: A broken leg suffered just days after his Roma debut means the Netherlands attacking midfielder will not return to action until early in the new year, depriving him of both the World Cup and winning a place at his new club.

Paulo Dybala: The Argentina forward will miss the tournament after tearing a thigh muscle while taking a penalty for his club, Roma.

Guilherme Arana: Brazil’s Olympic gold medal-winning left-back from last year in Tokyo was in line to start in Qatar, but a serious knee injury requires ligament reconstruction as well as surgery on his cartilage and medial meniscus – he’s out for the long haul.

Mike Maignan: The AC Milan goalkeeper would have been France’s No2, behind Hugo Lloris, but a calf injury is expected to sideline him until the new year.

Jesus Corona: Barring a miracle, the Mexico winger is out after suffering an ACL injury over the summer. He’s expected back in training with Sevilla in December, leaving no time for full fitness recovery.

Jakub Moder: The Brighton and Poland midfielder is out due to a long-term knee injury sustained just days after his nation confirmed their place in Qatar.

Miles Robinson: Centre-back for USA and Atlanta United, the 25-year-old tore his Achilles in May and is yet to return to action.

Timo Werner: Germany’s forward came off in Leipzig’s final Champions League group game with an ankle injury and, despite initial hopes it wasn’t serious, examinations have revealed ligament damage and he’s out for the rest of 2022.

Facing a race against time
Mikel Oyarzabal: Spain’s winger tore his ACL in March and although he’s now back in training with Real Sociedad, there’s a lot of work to do to prove his fitness before the squads are named.

Raphael Varane: The French centre-back injured his hamstring in Manchester United’s 1-1 draw at Chelsea last month and has posted pictures from France’s famous Clairefontaine training base as he tries to recuperate in time for Qatar.

Son Heung-min: The Spurs and South Korea forward will undergo surgery on a facial fracture sustained at Marseille in the Champions League. He required lengthy treatment on the pitch before being substituted and walking unsteadily down the tunnel.

Ben Chilwell: The England full-back has battled through injury over the past 18 months in order to get himself fit for both club and country, but he appeared to be holding his hamstring as he was helped from the pitch by Chelsea medics at the end of their 2-1 victory over Dinamo Zagreb.

Reece James: The Chelsea and England wing-back sustained a knee injury playing in the Champions League and is currently in Dubai undergoing rehab in the hope of recovering to play some part in the World Cup.

Kyle Walker: The Manchester City and England defender, who has been so key to Gareth Southgate’s success in recent tournaments, is still recovering from groin surgery but believes he can return in time for the tournament.

Kalvin Phillips: One of the mainstays of England’s run to the Euro 2020 final, The Manchester City midfielder has been out with a dislocated shoulder and is a doubt.

Richarlison: The Spurs forward picked up a calf injury against his former side Everton last month but is thought be in with a good shout of recovering before the World Cup begins for Brazil.

Manuel Neuer: The Germany goalkeeper has been out with a shoulder injury, but is expected to return at some stage with Bayern Munich boss Julian Nagelsmann saying he simply has to rest it for now.

Leroy Sane: More concern surrounds Neuer’s teammate and Germany winger, who suffered a thigh muscle tear in mid-October. They hoped he’d return against Inter, but Sane failed to do so.
Marco Reus: An injury suffered in mid-September was not initially thought to be too severe, but the Germany playmaker has suffered a setback. He has yet to return to action.

Raul Jimenez: The Wolves and Mexico striker is rushing to get himself fit for the tournament having barely played this season due to a groin injury.

Thomas Meunier: The Dortmund defender has been missing with a fractured cheekbone which required surgery, but he is hopeful of recovering to make Belgium’s World Cup squad.

Florian Wirtz: The Leverkusen forward has been out with an ACL injury and appears unlikely to recover enough to feature in Germany manager Hansi Flick’s final plans, despite being included in the preliminary 55-man squad.

Ronald Araujo: Having become a key Barcelona and Uruguay defender over the last 18 months, there’s still a fleeting hope that he returns from thigh surgery in time for the tournament but the original timeline put his return for December in a best-case scenario.

Atiba Hutchinson: Canada’s long-serving captain will be desperate to find fitness in time to make the squad after suffering a pre-season bone fluid issue. He’s yet to play for Besiktas this term.

Takehiro Tomiyasu: The Japan defender was forced off during Arsenal’s final Europa League group game on 3 November, with club coach Mikel Arteta looking to prevent the 23-year-old from suffering a more severe injury than the muscular one with which Tomiyasu is dealing.