For seven dispiriting years, Charles Villiers, a scion of one of the country’s oldest families and whose late mother was cousin to Camilla, Duchess of Cornwall, has been attempting to divorce his estranged wife, without success.

With his 18-year marriage in tatters, he jokes he must be the only man in western Europe unable to move on with his life because of a legal quagmire caused by EU ‘meddling’.

But that could all be about to change after the Supreme Court agreed to hear a landmark legal action next month brought by Mr Villiers, 56, who will blame Brussels and its impact on British divorce laws for ‘imprisoning’ him in a loveless union. 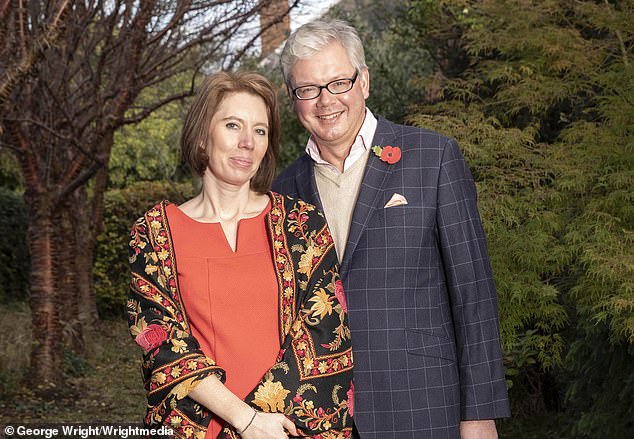 Charles Villiers with his new love Heidi Innes, a 42-year-old opera singer he met in 2017, at their home in Tyninghame East Lothian

And, in what is thought to be the first case of its kind in 200 years, the UK government have asked to be represented by their own QC at the hearing. The last time ministers intervened in a marital dispute at the highest court was to discuss the failed marriage of George IV to Queen Caroline in 1820.

The stakes are high for all parties in what has become one of Britain’s most bitter and protracted divorce cases. If Mr Villiers, a former racehorse owner and publisher, wins his test case before five judges, it will close forever a loophole created by the EU which sees Scotland and England treated as two separate countries in divorce actions.

The loophole has led to a rise in ‘divorce tourism’ where estranged husbands and wives use the English courts to obtain more lucrative maintenance deals against wealthy spouses residing in Scotland.

For Mr Villiers, who lives in East Lothian, a win would finally break the deadlock he has been in since his wife, Emma, moved to London shortly after their split in 2012. It would also allow him to move a step closer to marrying his new love, Heidi Innes, a 42-year-old opera singer he met in 2017.

Yesterday, Mr Villiers told The Mail on Sunday: ‘All I want is to be happy with someone I love and to marry her. But I’m a victim of EU meddling. The Supreme Court’s decision to hear my case is very welcome because there were no guarantees they would do so. 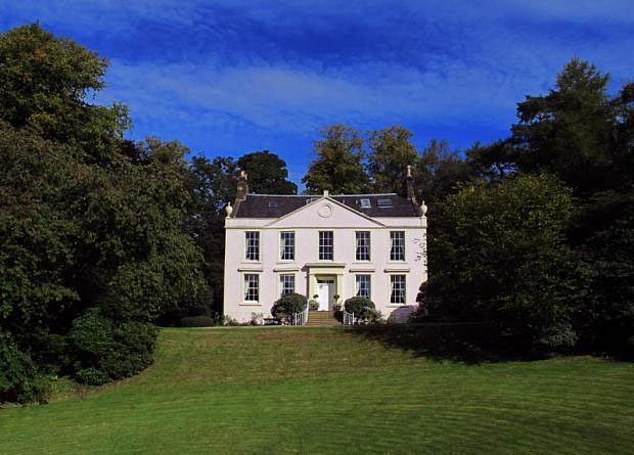 Country Manor: Milton House, Scotland, where Emma Villiers was said to like being ‘chatelaine’

‘There seems to be so much justice on my side, however, I feel I can win. I have a human right to be able to move on with my life, to be able to get divorced, to be able to have children with Heidi within a legitimate situation. The circumstances I find myself in are appalling. Nobody in 1972 envisaged the EU would start to interfere with our domestic laws, and I think it is a mark of how worried the Government are about a system they have allowed to develop unchecked that they are sending along someone to defend their position.’

Ironically, it was on the subject of ‘divorce’ that Mr Villiers and talented mezzo-soprano Ms Innes, who had recently separated from her own husband, initially bonded when they first met by chance in a central Edinburgh café.

Ms Innes recalled: ‘We started chatting and I told him I was about to view a flat because my marriage had ended. He told me he was separated too and that he understood how I felt, it must be painful. He didn’t tell me at that stage he had been trying to divorce for seven years – that was on the third occasion we met. I was absolutely appalled. I don’t know how he has stayed sane really.’ 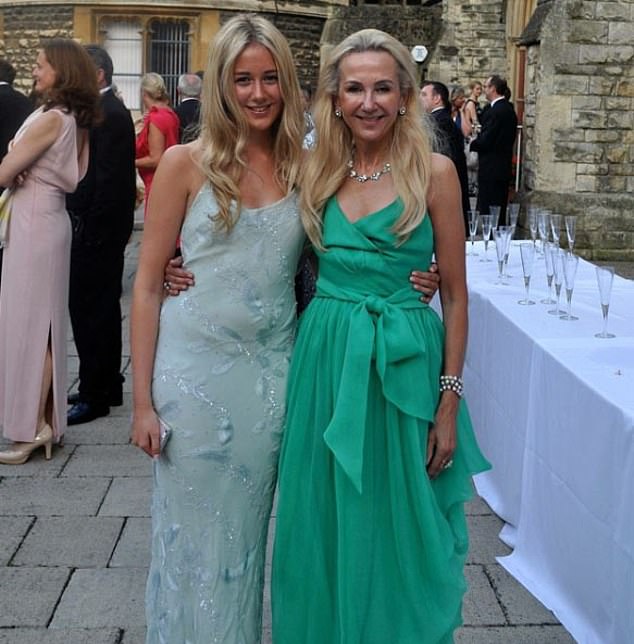 Emma Villiers, (right) with daughter Clarissa (left). For Mr Villiers, who lives in East Lothian, a win would finally break the deadlock he has been in since his wife, Emma, moved to London shortly after their split in 2012

She added: ‘Unlike Charles’s situation, my husband and I have been very mature in acknowledging our marriage didn’t work. It’s never easy but it should be a straightforward process. I wasn’t happy in my marriage and I feel as if the fates have rewarded my brave decision to start over again by sending Charles my way. It makes me feel awful that Charles can’t get divorced. It’s not particularly because I’d like a ring on my finger, but we would like to have a child together and it’s important to us that the child has his name.’

Mr Villiers’ more modest lifestyle now, in a rented five-bedroom house with Ms Innes and their eight-week-old dachshund puppy, Rosie, is a long way from the ‘vulgar excesses’ he associates with his estranged wife – he has claimed she loved the ‘trappings of wealth more than her husband’. 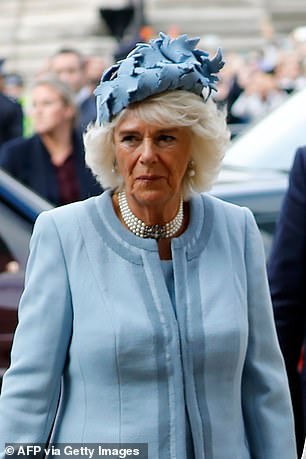 With their Scottish estate, eight-bedroom Georgian manor house and private loch, the Villiers seemed the epitome of wealthy marital respectability.

But he has confessed that as the marriage went on he found himself becoming increasingly disenchanted, and bewildered, with his wife’s apparent need for ‘bling’.

He said: ‘I remember giving her nice diamond rings for our tenth wedding anniversary, but when we went to race meetings she would wear these larger glass baubles and people would say, “Oh, Emma, what beautiful rings you’re wearing.” I got very bored with it all.

‘She’s the sort of person who had 11 pairs of white jeans, and then would go and buy more. She has no concept of the value of money.’ Mr Villiers, a devout Catholic who has family links with the Duchess of Cornwall through his mother, Elizabeth Keppel, the daughter of Viscount Bury, was first introduced to the woman who would become his wife at a Dorset house party.

They married in 1994 and settled in Milton House in Dunbartonshire. Their only daughter Clarissa arrived a year later. But Mr Villiers says the marriage started to founder in 2011 after he suggested they downsize, as Clarissa was then 17 and at boarding school in Gloucestershire. He said: ‘The house was enormous and there was just the two of us rattling around in it. It had served its purpose as a family home and I thought we should talk about a new chapter.

‘But Emma basically said, “If you’re ever thinking of selling this house, I’m off!” She said, “I’d rather sell my engagement ring than this house.” She was clearly saying, “I’m married to this house, not you.” She liked being chatelaine of Milton House.’

By 2012 the couple had separated, with Mr Villiers moving to Edinburgh while his wife moved to Notting Hill, west London, with Clarissa, now 24. He was subsequently declared bankrupt and, although discharged the following year with around £250,000 inherited from his mother, the family manor was repossessed in 2015. Mr Villiers then filed for divorce – in Scotland – but three months later his wife applied to the English courts for financial maintenance.

In March 2016, Mrs Justice Parker ruled Mrs Villiers was ‘habitually resident’ in England and approved a monthly £5,500 interim maintenance payment pending the divorce – although Mrs Villiers is seeking £10,000 a month.

Her lawyers say her husband has a half-share in a £3.5 million trust fund inherited from his maternal grandmother, Sonia Rosemary Keppel, plus another £600,000 from his mother. Mr Villiers says he has no direct access to the fund and has provided generously for Clarissa.

Earlier this year, Mr Villiers appealed to the Supreme Court on grounds including that the British government exceeded its powers when it allowed the EU Maintenance Regulation to dictate domestic divorce laws ‘without it being debated in parliament or without it having any proper scrutiny’.

The Supreme Court will hear his case on December 9 and 10. The five judges, including Lady Hale, who delivered the judgment in September that Boris Johnson had acted unlawfully in proroguing parliament, are expected to publish their ruling in early February.

Mr Villiers’ barristers, Michael Horton and Alex Laing, from Coram Chambers in London, are working pro bono because of the uniqueness of the case and warn that if the EU regulation continues to operate unchecked, there is likely to be a ‘significant increase’ in such cross-Border cases.

Mr Laing said: ‘The Villiers case is notable because it is like “the perfect storm” – parties having lived in Scotland for nearly all their marriage, the only child of the marriage being born in Scotland, Mr Villiers being made bankrupt and then being discharged from bankruptcy in Scotland, with the money he inherited from his late mother being used to pay his (and Mrs Villiers’) debts, him having no assets or significant income, and the only potential resource he might have would be if the trustees of his grandmother’s will decided to use their discretion to appoint money to him.

‘The UK is already the divorce capital of the world, but because of the ostensibly more favourable position in England than in Scotland for those seeking maintenance, this may lead people to race to start claims in England. It might well be said to encourage forum shopping. The Villiers decision is unquestionably a precedent for future cases. If the Supreme Court case is successful, its decision will bind all the courts in the UK.’

Exasperated that five years on from setting their divorce in motion at Dumbarton Sheriff Court, the only people to benefit so far are his wife’s lawyers, Mr Villiers said: ‘It’s a prime example of the EU trying to create a super-state. It can’t have been intended that one party can just say “I’m going to have a divorce in two different jurisdictions and you’re going to be compelled to go along with that, having two sets of solicitors”.

‘What she’s done so far is she’s been able to force the Scottish divorce to continually be put on hold. The last delay was for another year and this continually goes on. I must be the only person in Western Europe who is actually prevented from getting divorced. It’s got to the stage where my divorce is now in the highest court in the land and we’ve got the government of the day asking to intervene. It’s only happened twice before – with George IV and Queen Caroline, and before that with Henry VIII when he was trying to divorce Catherine of Aragon.

‘I do feel confident but I have a horrible feeling they will try to justify their position to try to continue the use of statutory instruments or so-called ‘Henry VIII clauses’ to keep lots of EU law in the UK law after Brexit.’

If he is successful, his Scottish divorce action will resume and Mrs Villiers will receive maintenance payments only for three years after the decree, whereas in England it would have been for life or until remarriage.

Mr Villiers said: ‘One of the extraordinary things about when you separate is… you slightly wonder whether you ever truly knew the person in the first place. It will all come out in the case. Meanwhile, I’m looking forward to moving on and starting a new life with Heidi.’

A spokesman for Mrs Villiers’ legal team said: ‘At this time, we’re not prepared to comment.’

A Ministry of Justice spokesman added: ‘We cannot comment on ongoing legal proceedings.’