Four more people have died in protests in Bolivia, an international monitor reported yesterday, as the UN rights chief warned that excessive force by police and the army could see unrest ‘spin out of control’.

Fierce clashes between security forces and supporters of exiled ex-president Evo Morales have rocked the country since Tuesday, when Senator Jeanine Anez declared herself the country’s interim leader.

Morales resigned and fled to Mexico after losing the support of Bolivia’s security forces following weeks of protests over his disputed re-election.

The latest toll takes the total number killed in the political crisis to 23, according to the Washington-based Inter-American Commission on Human Rights, which also recorded 122 injured since Friday.

It raises to nine the number of people killed in clashes with security forces on Friday outside the central city of Cochabamba, a Morales political stronghold. 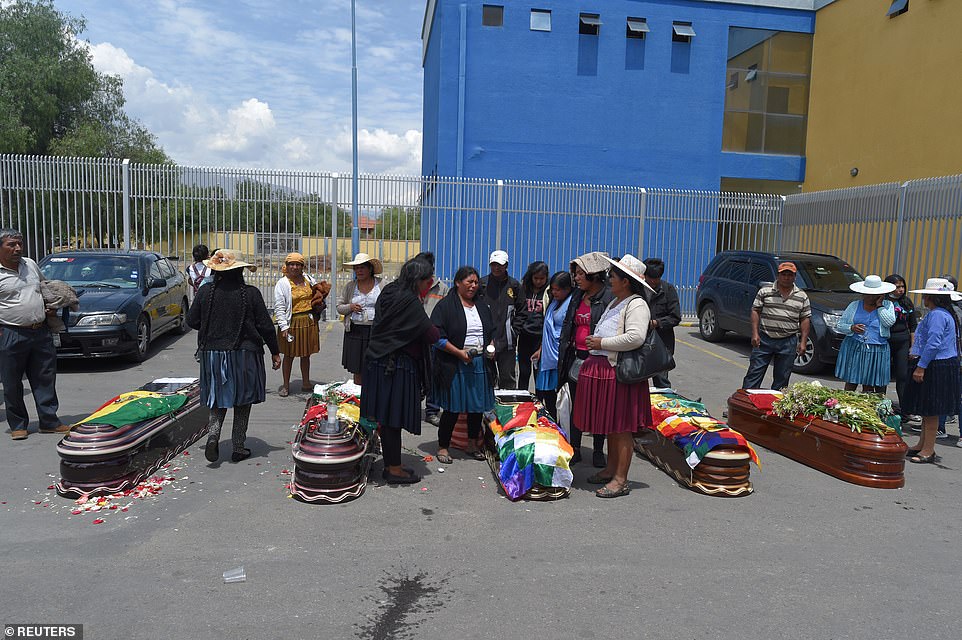 Relatives standing next to coffins of supporters of former Bolivian President Evo Morales, who died during clashes with security forces on Friday, in Cochabamba 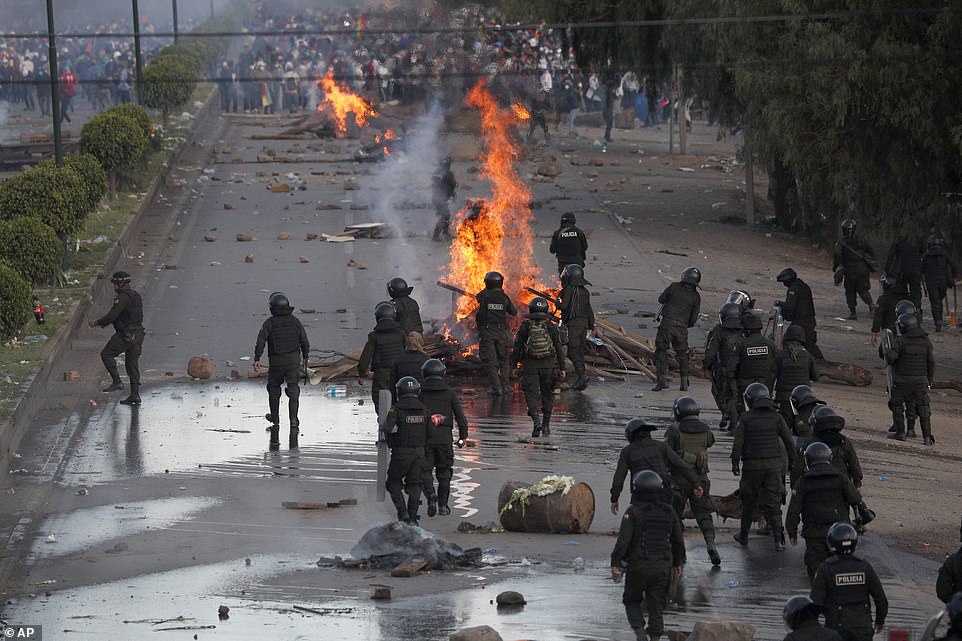 Police dismantle a barricade constructed by supporters of former President Evo Morales, on the outskirts of Cochabamba, Bolivia, yesterday 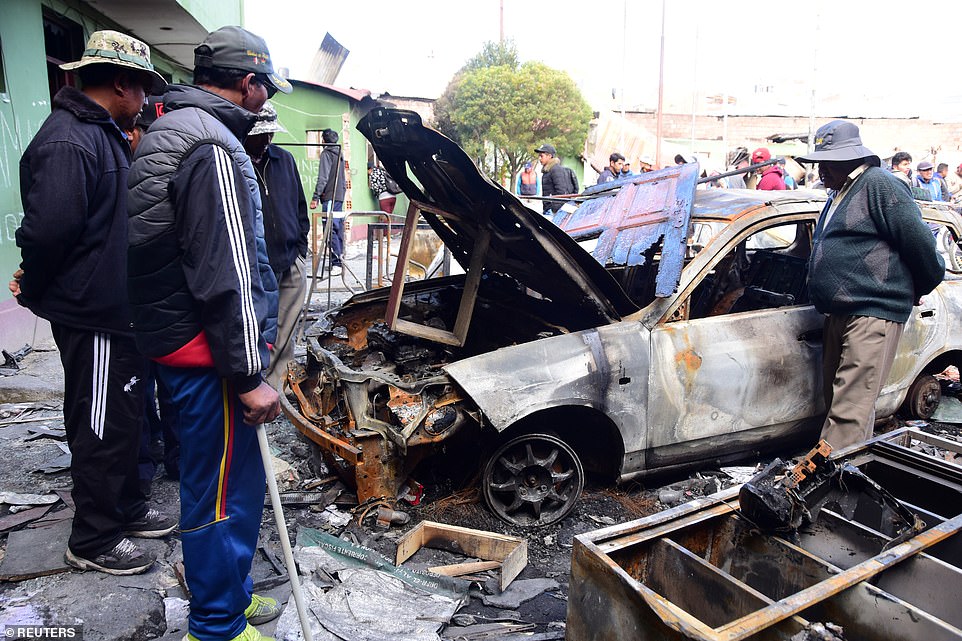 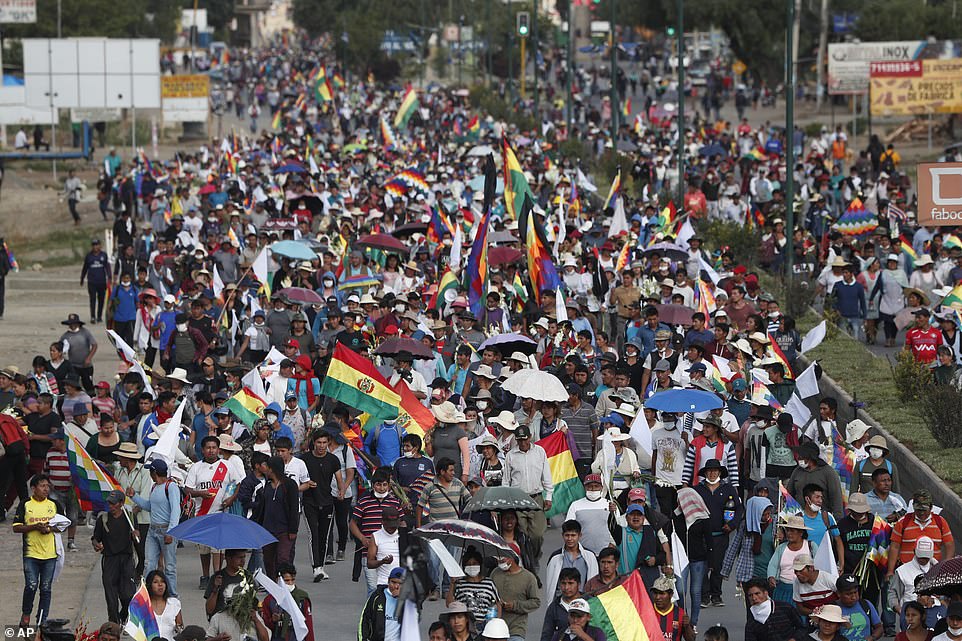 On Saturday, Bolivia’s national Ombudsman’s Office raised the death toll to eight, but the IACHR said none people had been killed.

Thousands of coca growers had tried to reach the city to join a protest against Anez but they were blocked by riot police, who stopped them from crossing a bridge and dispersed the crowd after dark with the support of the army.

Five protesters were initially reported dead in the confrontation. Interim cabinet chief Jerjes Justiniano was unable to confirm the higher toll when speaking to reporters on Saturday.

UN High Commissioner for Human Rights Michele Bachelet said those deaths appeared to have resulted from ‘disproportionate’ force by police and the armed forces.

‘This is an extremely dangerous development as, far from quelling the violence, it is likely to make it much worse,’ she added.

‘I am really concerned that the situation in Bolivia could spin out of control if the authorities do not handle it sensitively and in accordance with international norms and standards governing the use of force.

Anez issued a decree on Thursday that authorised the military to participate in maintaining order and exempted the armed forces from criminal responsibility.

Morales, 60, said on Twitter that the measure gave ‘carte blanche and impunity to massacre people’.

Unrest in Bolivia first erupted when Morales – the country’s first indigenous president – was accused of rigging the results of October 20 polls to gain re-election for a fourth term. 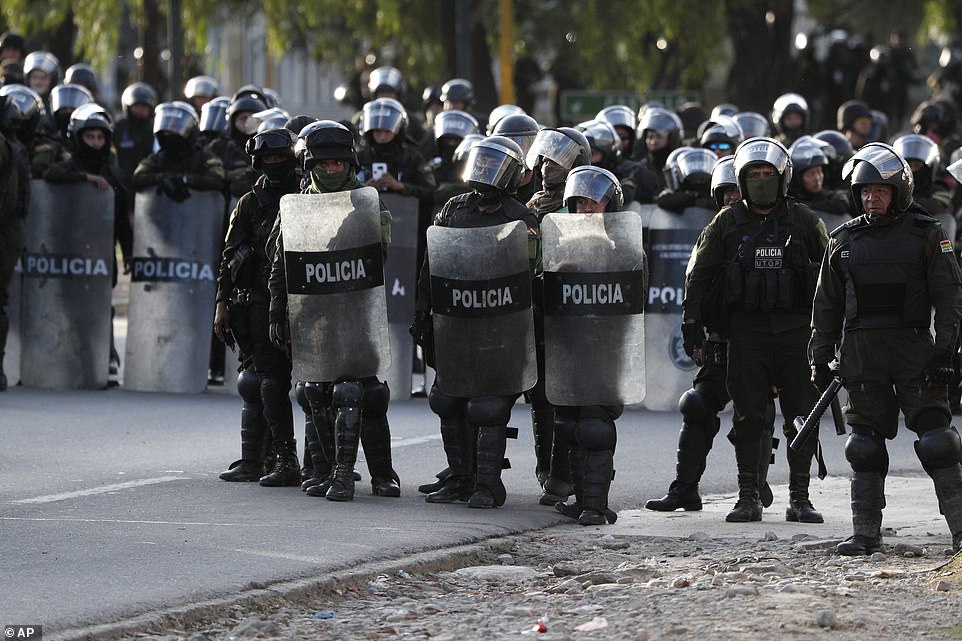 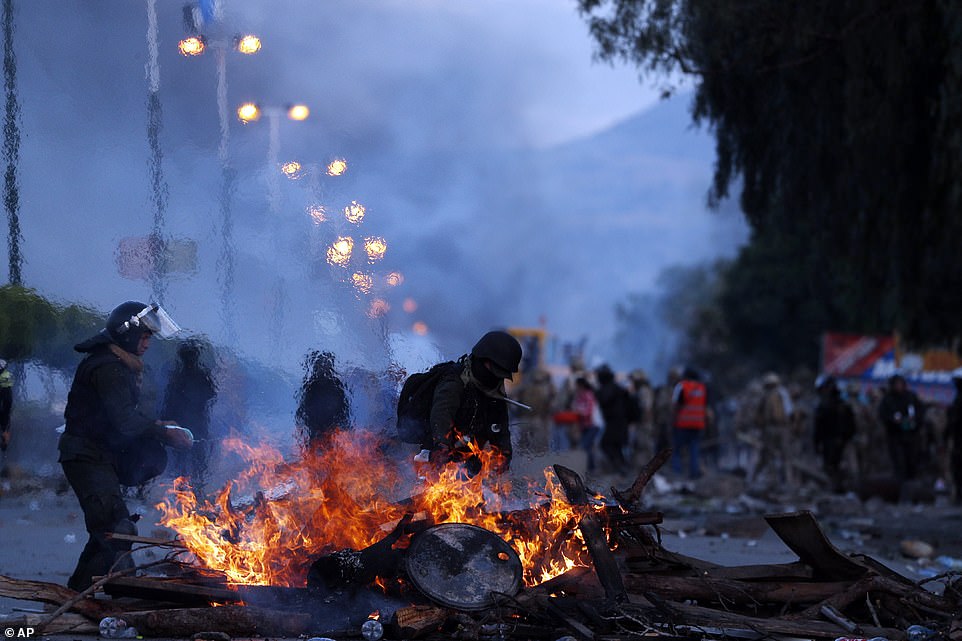 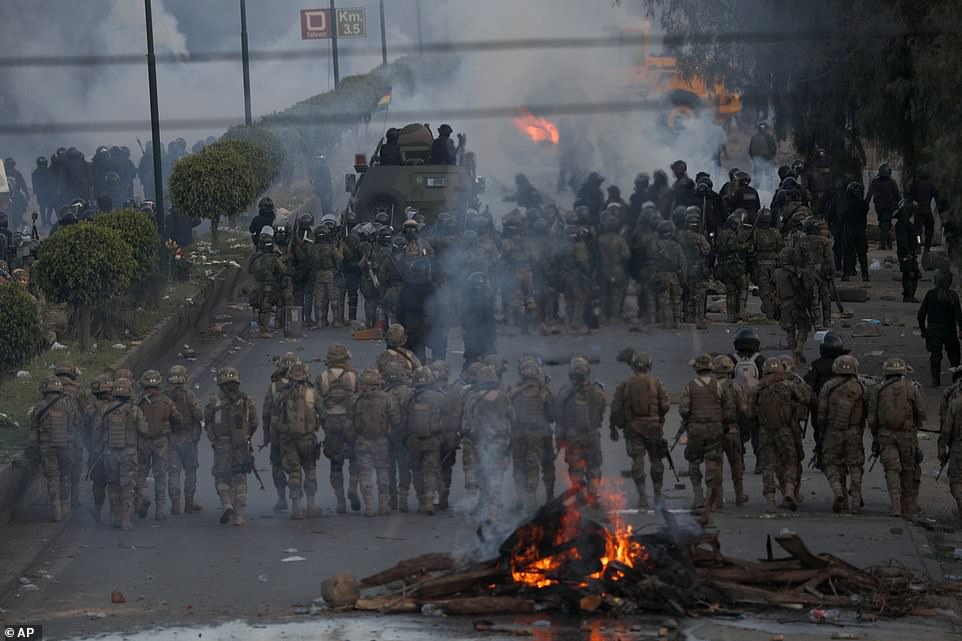 Military police advancing on backers of Morales as they try to reach Cochabamba yesterday. The death toll from clashes on Friday and Saturday has risen to nine 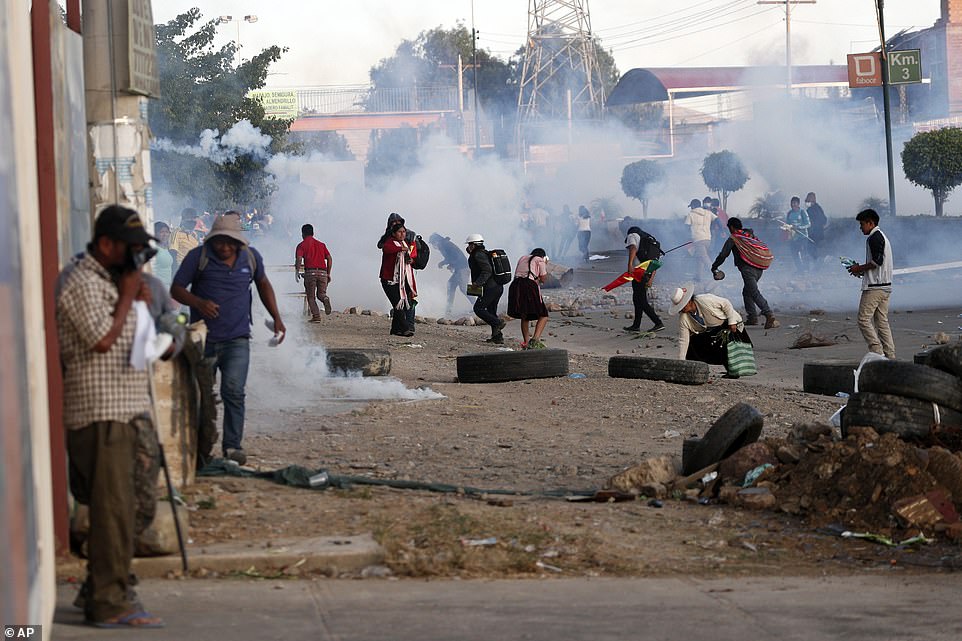 Supporters of Morales running from tear gas fired by police near Cochabamba. Officials now say at least nine people died when Bolivian security forces fired on Morales supporters the day before, in Sacaba

He eventually resigned and fled the country after losing the support of Bolivia’s security forces following weeks of protests, but said this week we was willing to return to bring peace to Bolivia.

But Anez said her predecessor would have to face charges if he returned, telling journalists that there were ‘many allegations of corruption’ during his tenure.

Anez, the former deputy senate speaker, took over the top job to avoid a power vacuum – a move endorsed by the Constitutional Court.

Bachelet said Saturday that the country was ‘split and people on both sides of the political divide are extremely angry’.

Tensions had risen in the wake of ‘widespread arrests and detentions,’ she added.

Bolivia’s interim president met with a UN envoy to discuss the country’s crisis on Saturday, a day after the clash that killed nine people and raised fears that violence could escalate.

On leaving the meeting with interim leader Jeanine Anez, UN envoy Jean Arnault said the United Nations is concerned about the violence in Bolivia and hopes it can contribute to an accelerated pacification process leading to elections. 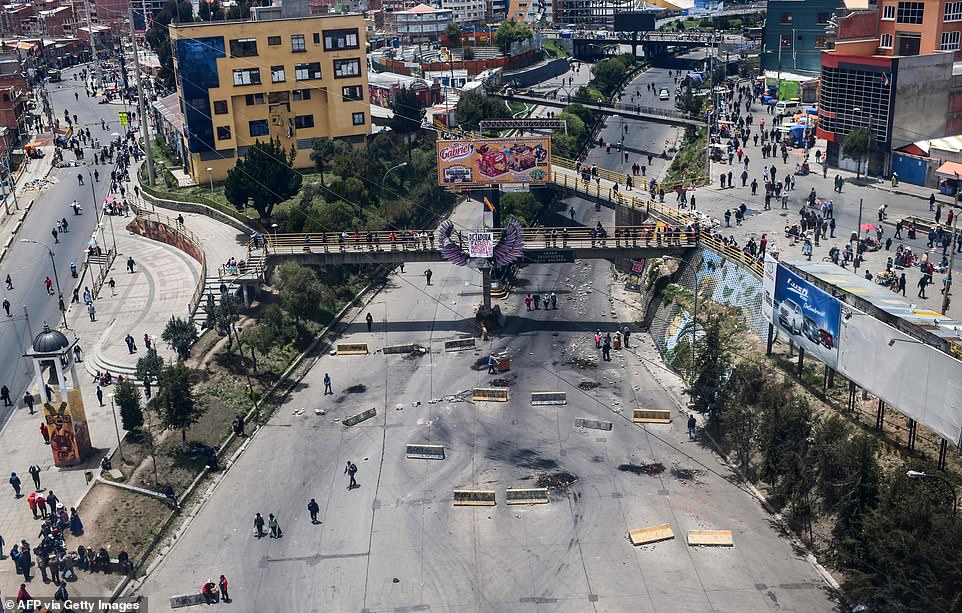 The road linking El Alto and the capital La Paz blocked by supporters of the ex-President Evo Morales, as seen from El Alto 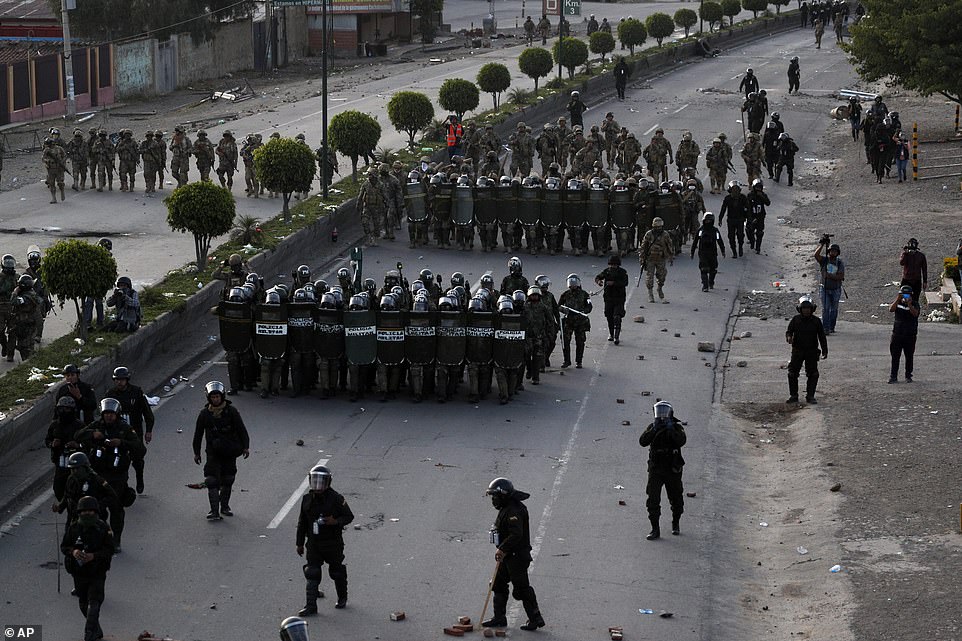 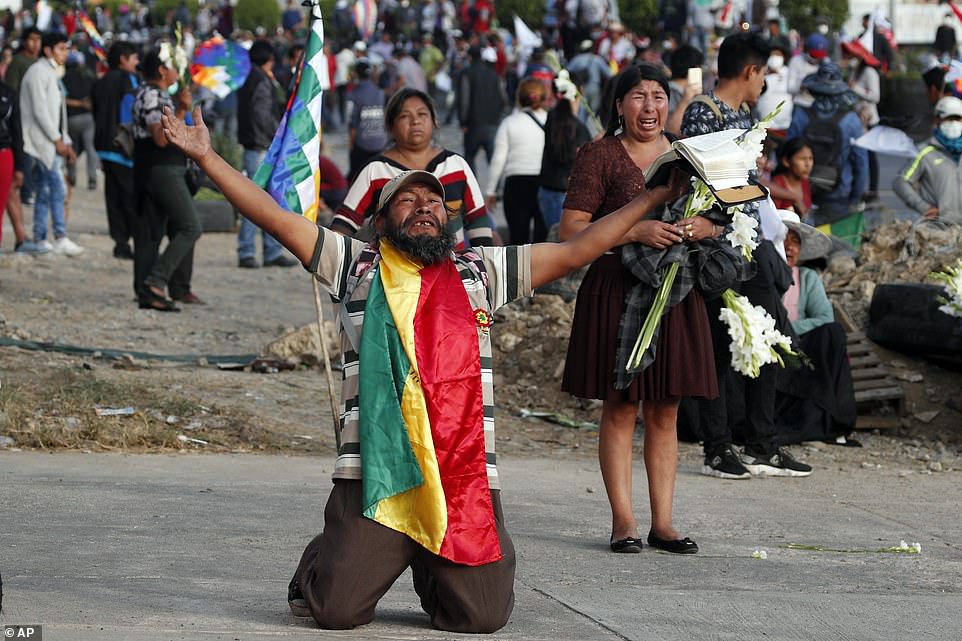 Protesters said police on Friday fired when demonstrators tried to cross a military checkpoint in Sacaba, a town near Cochabamba.

Many of the protesters were coca leaf growers loyal to Morales, who had been Bolivia’s first indigenous president before being pressured to step down by Bolivia’s military chief after weeks of widespread protests over a disputed election.

Witnesses to the clash described seeing the bodies of several protesters and dozens of people rushed to hospitals, many covered in blood.

Police and soldiers broke up fresh blockades of flaming logs and tractors Saturday on the road linking Sacaba to Cochabamba, but there were no immediate reports of deaths.

Fears of escalating violence were stoked when angry demonstrators and relatives of the victims gathered at the site of the shootings late Friday chanting, ‘Civil war, now!’

Morales, who was granted asylum in Mexico after his November 10 resignation, said on Twitter that a ‘massacre’ had occurred and he described the interim government led by Anez as a dictatorship. 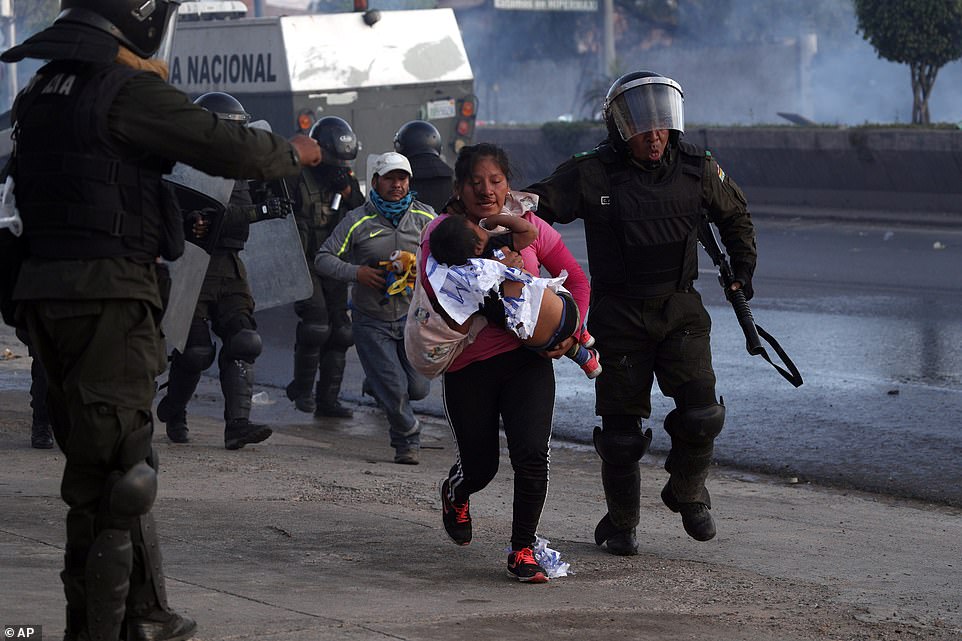 A woman carrying a young child is guided away from the melee by police in Cochabamba. Four more death were confirmed after five were killed in Sacaba over the weekend 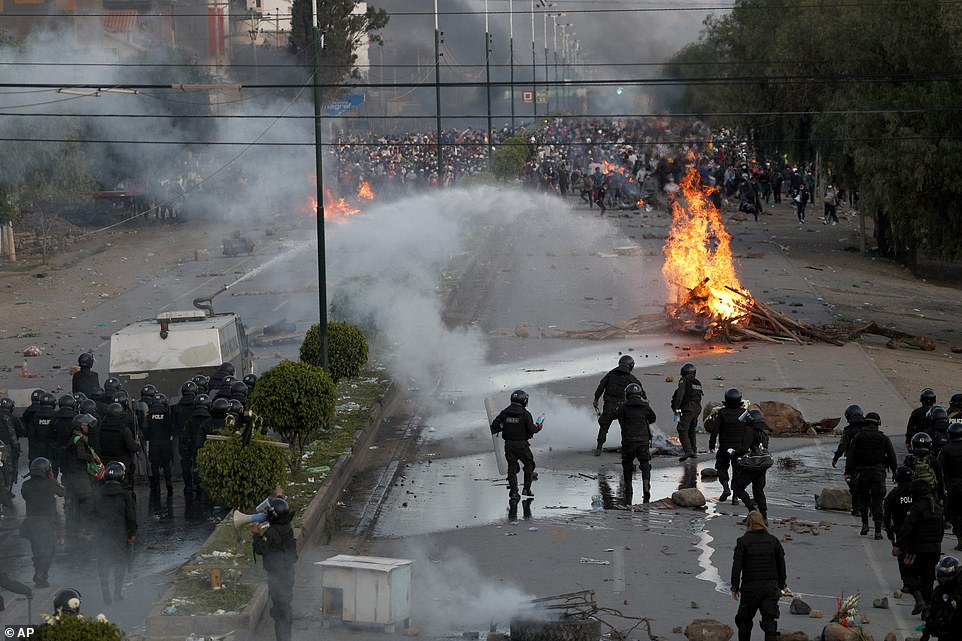 Donald Trump tweets image of himself as ROCKY