Katharine Hamnett is one of Britain’s most acclaimed designers. But, she tells me frankly, if she could have her time again, she wouldn’t go into fashion at all.

‘If I’d known at the beginning of my career what I know now, I would have done something intelligent instead — like become a film director,’ she says.

Now 72 and celebrating 50 years in fashion, she’s horrified by the industry’s record on sustainability, and trots out stats like a politician on the stump: ‘There are Indian cotton farmers living on £200 a year, and 250,000 have committed suicide in, like, the past five years. 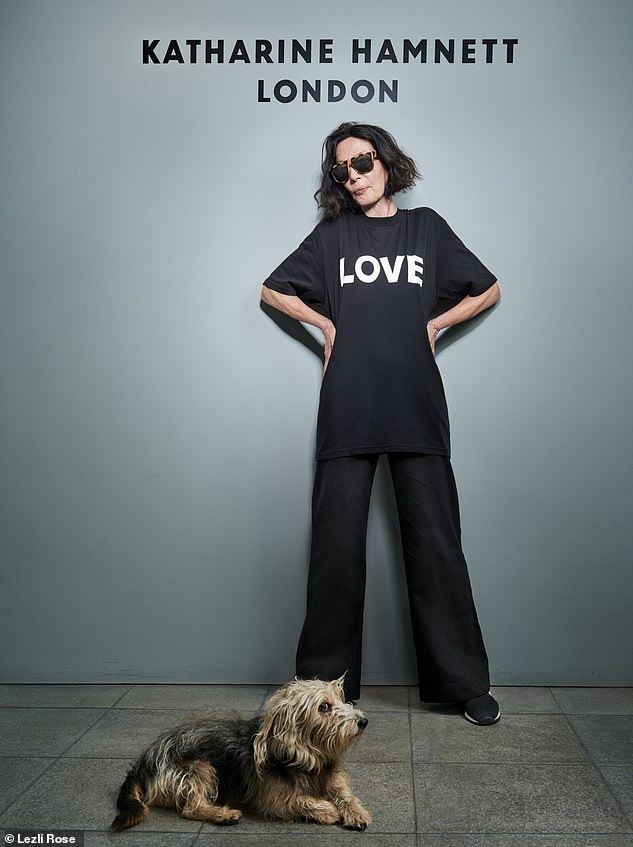 Katharine Hamnett, pictured, has admitted that she is horrified by the fashion industry’s record on sustainability, and the fact that so many people commit suicide on cotton farms. Figures show around 300,000 have done so in the last 20 years

‘It’s a complete nightmare, and incredibly disruptive for the climate.’

Katharine Hamnett has always been outspoken. After graduating from Saint Martin’s School of Art in 1969, her eponymous label became the de facto uniform of excess-loving British stars of the Eighties, and everyone from George Michael to Madonna wore her unmissable black-and-white slogan T-shirts.

She is probably still most widely known for one headline-grabbing stunt back in 1984. She turned up to a London Fashion Week reception at Downing Street wearing a white T-shirt she’d block-printed with the slogan: ‘58% Don’t Want Pershing’ (a reference to an unpopular suggestion that U.S. Pershing intercontinental ballistic missiles be based in the UK).

The Press photographers went wild, while then-Prime Minister Margaret Thatcher responded with a pithy: ‘Oh, we haven’t got Pershing here, my dear. We’ve got Cruise [missiles]. So maybe you’re at the wrong party.’ 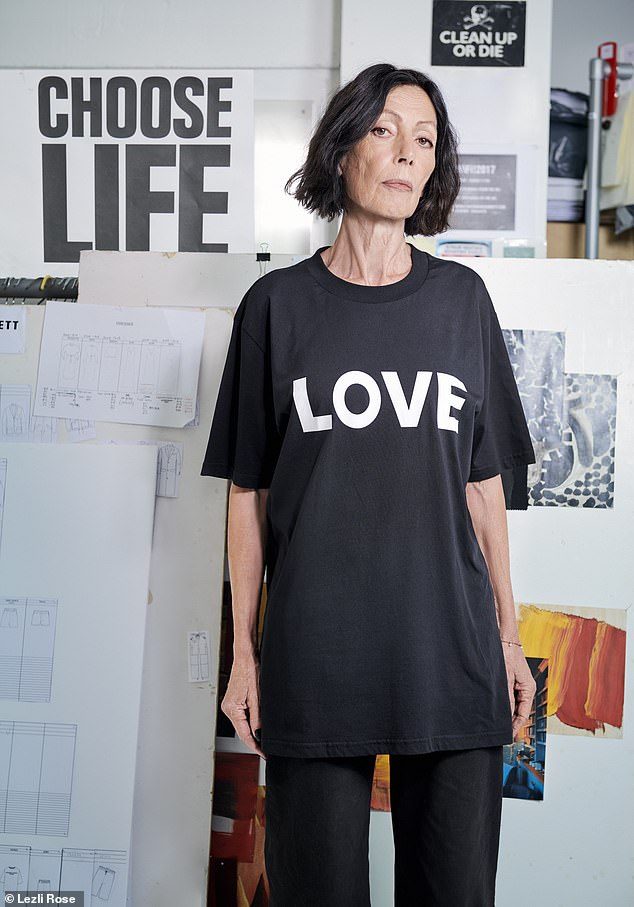 George Michael and Madonna famously donned clothes made by the designer

Katharine was not on the guest list for the following year’s reception. It was a notable exclusion — at the time, she was arguably the UK’s highest-profile designer and had just won the British Fashion Council’s first-ever Designer Of The Year award.

Her monochrome separates were worn by Princess Diana, while the ‘Frankie Says Relax’ tees made famous by Frankie Goes To Hollywood were based on her designs.

It wasn’t until 2011 that she was awarded a CBE for her services to the fashion industry, choosing to meet the Queen wearing an organic cotton dress of her own design and a striking Philip Treacy hat covered in red cockerel feathers.

Today, we meet at her East London studio, where she still works. She arrives with her little terrier, Arthur, having walked from her home across London Fields.

She’s tall and elegant, with a punky twist — a cross between Patti Smith and Chrissie Hynde. She is wearing a black (slogan-free) T-shirt with black cigarette trousers, dark shades and an immaculate black manicure, along with her messy dark bob.

She is warm and affable, but seems not to have mellowed with age. These days, her preoccupation is sustainability in the fashion industry. ‘We have to change; our lives are at stake. And that of every other living thing on the planet, too,’ she says.

This stance is entwined with her interest in Buddhism, which began in the Eighties. Its teachings spurred her to look into the ethics of every aspect of her life, including her business.

‘I asked my design team to do some research into cotton in 1989 and, when the report came back . . .’ Katharine shakes her head.

‘It was devastation: 10,000 deaths per year from accidental pesticide poisoning, contamination of the water supply.’

But would she really take back all of her glittering career if she could? Well, maybe. She has described her time at art school, from 1964 to 1969, as ‘absolute heaven . . . the first time the working-class had mixed with the upper-class’.

She admits: ‘I had to tone down my accent a bit.’ 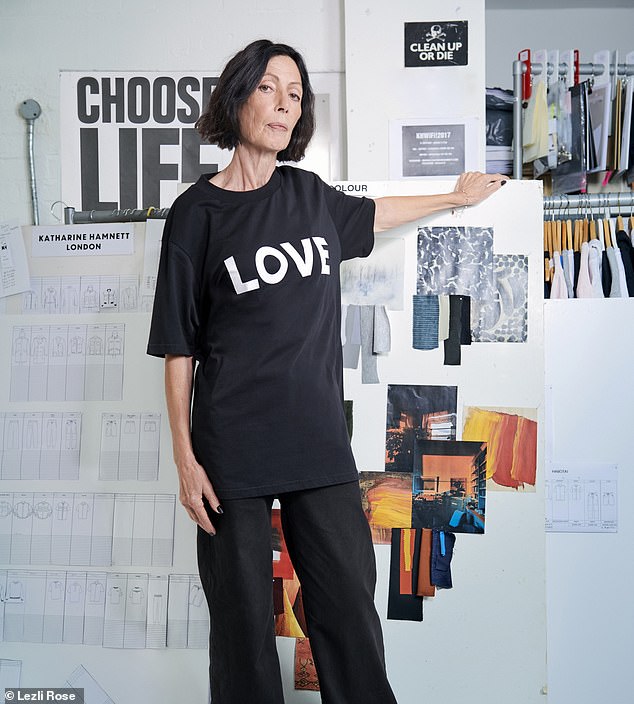 Katharine Hamnett said that, if she had the choice again, she would become a film director

She is undeniably posh. Born in Gravesend, Kent, the daughter of a society beauty and a military attache, she boarded at Cheltenham Ladies’ College (‘I hated it,’ she has said).

When her father worked in Bucharest, she commuted to school on the Orient Express.

Clothes were important for the various embassy events and parties the family had to attend, but Katharine found it hard to find ready-to-wear because she’s nearly 6 ft.

So, when the family were based in Paris while she was a teenager, she started to make her own clothes. The hobby became an obsession that led to art school.

She is very much the Sixties art school grad: deeply eccentric and — though I’m sure she wouldn’t thank me for saying it — a hippy to her core. And yet she came to embody the over-the-top, have-it-all culture of the Eighties.

She says: ‘We were just expanding and expanding. We were selling in 700 shops in 40 countries around the world — it was almost too easy. The extravagance was getting out of control. But, of course, I was also enjoying being out of control.

‘I remember insisting on staying on an island on Lake Maggiore [in Italy] where a boatman would have to come and get us. Oh, God!’ She shudders. ‘We did one fashion show at the Cirque d’Hiver — a beautiful, neo-classical theatre building in Paris. And they still had the animals then — these huge panthers in enormous cages. We did the changes in the stables, which had chandeliers and red carpet. It was amazing.’

Was she a ghastly diva?

‘Beyond! And we were very naughty, but our trick was staying out of the papers.’

She pauses. ‘Did you ever come to our parties on the Bateaux Mouches during Paris Fashion Week? People talked about it for 15 years! We flew over Paul O’Grady back when he was Lily Savage, and the French had never seen anything like it.’

All a far cry from the eco-warrior of today — a transformation that, she admits, was a long and difficult process.

Katharine spent the Nineties fighting to make her company more ethical, while raising her children. She’s been married (and divorced) twice, the first time at 21 to Richard Hamnett, a graphic designer, and then to painter Jeffrey Pine, with whom she has sons Samuel, now 42, and William, 37.

‘I had family things going on in the Nineties and I was also trying to change the company around. It was unbelievably difficult,’ she recalls. ‘I had total opposition from my organisation. People were saying: ‘Yeah, yeah, of course!’ — and then I’d find out they’d substituted unsustainable materials.’

There is, I observe, a lot of talking around these issues — and some hypocrisy, too. Whether the global fashion industry can ever be truly sustainable is a moot point.

As for Fashion Week, when hordes of Press, buyers, celebrities and influencers jet around the world to shows, Katharine observes: ‘It’s very hard to beat the impact of the live show — but I think they should be live-streamed. We need to be clever at making clothes that people want and present them differently.’

I ask what we can all do to make a difference. ‘Mend your clothes and sew buttons back on.’ Pause. ‘And buy organic cotton. I met the sustainability director at H&M and asked why they didn’t use more organic cotton — and they use a lot — and she said: “We can’t get it.” I said: “But if you talked to the farmers! You’re big enough to order it and pre-pay for the crop. They’d plant it for you!” Everyone’s got to get off their a**e.’

I think ‘GET OFF YOUR A**E’ would make an ideal slogan for one of Katharine’s T-shirts.

Her passion and drive are both exciting and exhausting. Yet you can’t help but admire her for trying to change things from the inside.

I confess, guiltily, that, at her age, I might be tempted to put my feet up by a pool — she has a home in the north of Mallorca. Her response? ‘Honestly, you’d die of boredom in about six minutes!’