A British suspected ISIS militant has been charged with preparing terrorist acts after he was deported from Turkey and arrested at Heathrow Airport.

Mamun Rashid, 26, of east London, was arrested on Thursday, November 14 after he arrived on a flight to the UK from Turkey.

The Met said Rashid was charged on Sunday with the preparation of terrorist acts under section 5 of the Terrorism Act 2006.

He will appear at Westminster Magistrates’ Court on Monday. 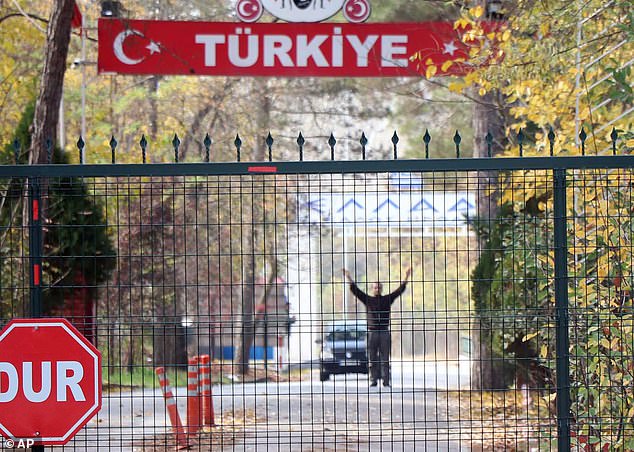 Turkey began deporting captured foreign IS fighters last week. A man identified as a US citizen who had been deported by Turkey and was left stuck in the heavily militarised no-man’s land between Greece and Turkey. He was later deported back to the US

Turkey deported the UK fighter back to Britain, along with seven German suspected jihadists who will also be returned to their home countries.

The arrested man is one of more than 400 people alleged to have fought for the terror group before returning to the UK – another 500 were killed there and 600 British ISIS fighters, their brides and children were living in refugee camps in Syria after the caliphate fell this year.

President Recep Tayyip Erdogan has long complained about European countries not taking their home-grown militants back following the collapse of the so-called caliphate in Syria.

Who are the seven Germans?

A married couple born in Baghdad along with their five children, two of them adults and the youngest born five months ago while they were abroad, were pictured at Istanbul airport today.

Their jet landed at Berlin-Tegel at 4.52pm, according to Bild.

They are understood to have entered Turkey at the end of January.

They were detained in March and have been in custody since then.

According to the German paper, Turkish authorities have not disclosed the reason for their detention and therefore, there is no warrant for their arrest in Germany.

Scotland Yard and the Home Office had initially refused to name the terror suspect held at Heathrow.

Since Erdogan’s forces invaded northeast Syria to drive Kurds away from the border, Turkey has pushed to deport foreign ISIS militants who are being held in its prisons or across the border in Syria.

About 90,000 men, women and children with links to ISIS are being held by Kurdish forces in Syria.

ISIS ‘matchmaker’ and recruiter, Tooba Gondal, who has dual British and French citizenship, is also believed to be in Turkish custody.

Although it is said to be among the 11 French nationals also due to be sent back to France by Turkey.

Another British-born ISIS militant held in a Turkish prison is Aine Davis, a member of the so-called ‘Beatles’ torture gang that beheaded hostages including western journalists and aid workers in Syria.

But ‘Jihadi Paul’ as he was known, originally from Hammersmith, west London, is aged 35. 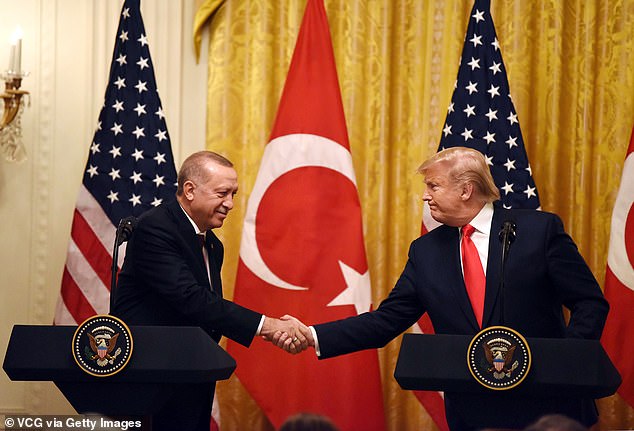 Turkish President Recep Tayyip Erdogan shaking hands with President Donald Trump during a joint press conference following their meeting at the White House. It was announced that the US would take back its citizen left stuck between Turkey and Greece

The Met said the counter terrorism arrest was ‘on suspicion of preparation of terrorist acts’ and ‘Syria-related’.

A spokesman added: ‘Officers from the Met’s Counter Terrorism Command have today, November 14, arrested a man on suspicion of terrorism offences.

‘The 26-year-old man was arrested after arriving at Heathrow Airport on an inbound flight to the UK from Turkey.

‘He was arrested on suspicion of preparation of terrorist acts under section 5 of the Terrorism Act 2006. He was detained under PACE and currently remains in police custody.’

The force added that the investigation will continue.

Last month it was confirmed two suspected ISIS terrorists, dubbed ‘the Beatles’ because of their British accents, had been transferred from Syria into US custody.

Alexanda Kotey and El Shafee Elsheikh, both in their 30s, were moved by American security services to an ‘undisclosed location’ amid fears they could escape custody as Turkish troops invaded the Syrian Kurdish-held region of north-eastern Syria. 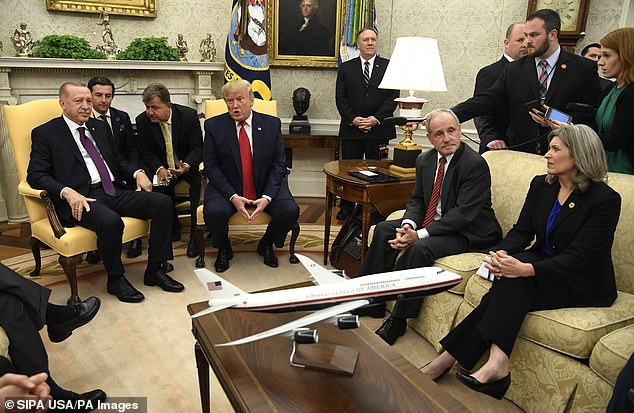 They were described as ‘the worst of the worst’ by US president Donald Trump.

It is believed they are now in Virginia awaiting trial, where they could face the death penalty.

Shamima Begum, the Bethnal Green schoolgirl who fled to Syria to join IS in 2015, was subsequently stripped of her British citizenship by then-Home Secretary Sajid Javid, prompting her to take legal action against the UK.

The convert was 18 when he left his Oxfordshire home to join IS in Syria in 2014.

The announcement of deportations from Turkey came as an American man suspected of being a member of ISIS and was left for three days trapped between Greece and Turkey will finally be repatriated back to the US.

The man, identified by Turkish media as 39-year-old Mohammad Darwis B, was stuck in the heavily militarised border zone after Turkey tried to expel him to Greece on Monday, but Athens refused him entry.

The US agreed to take him in and will provide him with travel documents, the ministry said, adding that the repatriation was underway. 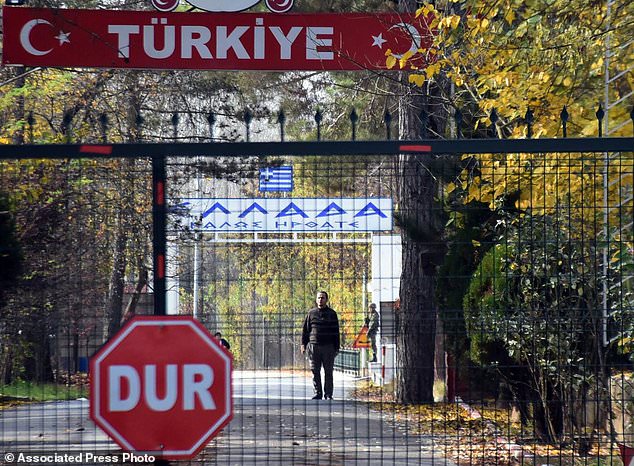 It comes a day after President Erdogan met with President Donald Trump in Washington.

The Ministry said today the man had asked to be deported to a ‘third country’ and chose Greece.

He is said to be an American citizen of Jordanian background.

He had been spotted in the no man’s land for three straight days. Media reports said Turkish authorities allowed him to spend the night in a vehicle, where he was fed.

The ministry said in a statement: ‘Upon guarantees that he will be taken back by the United States and that travel documents will be procured, the necessary proceedings have been started to send him to the United States.’

Separately the ministry said Turkey was also deporting one British and seven German fighters back to London and Berlin respectively on Thursday.

Ankara had announced on Monday that the seven German nationals would be deported this week.

Three foreign ISIS suspects – from the United States, Denmark and Germany – were deported on Monday.

The Interior Ministry said Thursday that procedures to expel seven German citizens and one British citizen to their home countries were continuing, without saying when they would deported. Earlier, a ministry spokesman had said seven Germans would be sent home on Thursday.

Meanwhile, the Interior Ministry also said on Thursday that a wanted ISIS suspect was detained by anti-terrorism police in a raid in Istanbul after he illegally crossed into Turkey from Syria.

The ministry said the man, it identified as Mevlut Cuskun, was being questioned by police.