Jeremy Corbyn stood by and did nothing as a pro-Palestinian activists branded Jews ‘immoral’ and accused them of ‘celebrating’ the death of innocents, newly unearthed footage reveals today.

The Labour leader was by the side of the stage at a London rally as Ishmail Patel spoke just feet away.

The footage raises fresh questions for Mr Corbyn, who was today questioned over his personal role in the fight against anti-Semitism.

Mr Patel has previously praised Hamas for ‘standing up to Israel’ and insisted it is ‘no terrorist organisation’.

As Mr Corbyn looked on he tore into Jews over the situation in the Middle East, saying: ‘We see the impact of Zionism on Palestinians.

‘But it has had a devastating effect on the Jewish community itself: it has made them immoral in justice. 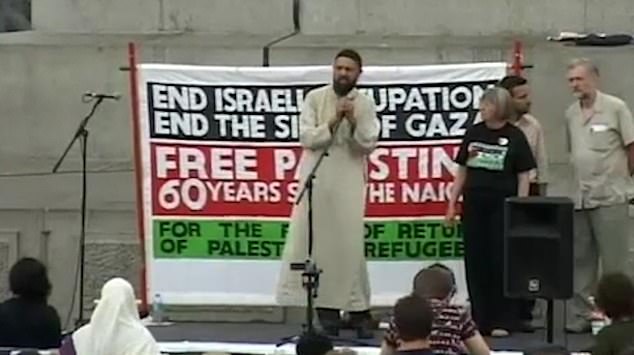 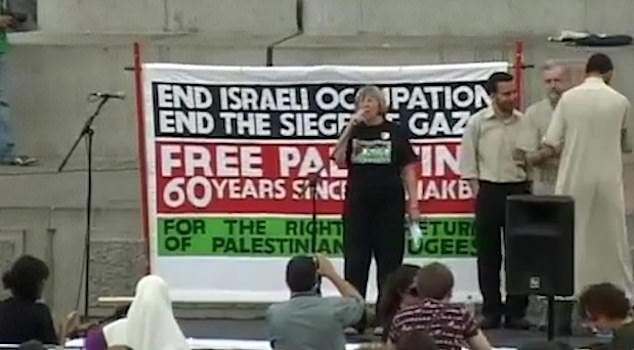 As Mr Corbyn looked on he tore into Jews over the situation in the Middle East, saying: ‘It has had a devastating effect on the Jewish community itself: it has made them immoral in justice’ 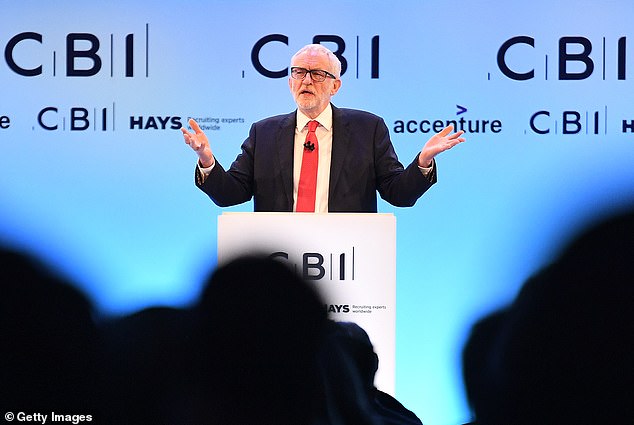 Jeremy Corbyn was grilled over his personal role in tackling Labour’s anti-Semitism crisis at the CBI conference in London today.

‘How can you have a community that can celebrate 60 years of intimidation?

‘How can you have a community that can celebrate 60 years of dispossession?

‘How can you have a community that celebrates the killing of innocent Palestinian people?

‘This is what Zionism has done to Judaic faith ‘

The footage, obtained by the Red Roar website, was filmed at a Palestine Solidarity Campaign event in 2008. Mr Corbyn was a long-term patron of the organisation.

Mr Patel is chairman of the  Friends of Al-Asqa, based in Leicester.

In 2016 Jeremy Corbyn’s team came under fire for allegedly taking thousands of pounds from the group.

The money came from the proceeds of a fundraising dinner held for Mr Corbyn’s campaign.

While a Labour spokesman said the cheque had been ‘made out to the wrong person’, it has not been made clear what happened to the funds.

The opposition leader was directly asked about the crisis that has overshadowed his party leadership after he addressed the Confederation of British Industry in London.

After a speech in which he attempted to placate business leaders’ fears about his nationalisation plans he took questions from the audience. 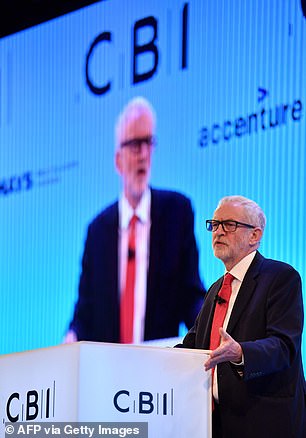 The opposition leader was directly asked about the crisis that has overshadowed his party leadership after he addressed the Confederation of British Industry in London .

One was from a woman who called herself Hannah from the Patchwork Foundation, who wanted to know about his plans for workplace diversity.

She bluntly asked him: ‘What are you going to be doing, personally, to demonstrate you care about racism and anti-Semitism in society and show that Labour isn’t just for the many and not the Jew?’

The Labour leader replied saying anti-Semitism has ‘no place whatsoever in a civilised society’.

But he widened his answer to discuss other forms of racism, including Islamophobia.

He continued: ‘I’ve spent my life opposing racism in any form. Be it done by the far-right or by the random attacks on individuals, or against a man that was murdered outside my house because he happened to be a Muslim and there happened to be a racist person driving a vehicle that thought it was OK to drive in a crowd of worshippers.

‘Just as much as those people that attack synagogues, daub fascist graffiti over them, or attack Jewish people in this country, the USA or anywhere else, have no place whatsoever in a civilised society.’

He added: ‘The history of the Jewish people has been one of the most unbelievable and egregious – (with) attacks on them in central Europe throughout the early part of the 20th century, which of course ended with the Holocaust and all the horrors that went with that.

‘That is where racism leads you to if you don’t challenge it in the first place. But it’s also about ensuring that every young person in our society is guaranteed a place of safety free from oppression and free from racism in any form.’

Scientists claim cats DO have facial expressions but most humans are...