Prince Andrew has been ridiculed by international media over his ‘nuclear explosion-level bad’ BBC interview on his relationship with the late financier and convicted sex offender Jeffrey Epstein.

Across the world readers woke up to the Agence France-Press headline: ‘Britain’s Prince Andrew lambasted after ‘catastrophic’ interview on Epstein links.’

The royal’s decision to assent to trial by television was torn apart by the New York Times: ‘Prince Andrew gets candid, and Britain Is Appalled.’

Meanwhile The Irish Times asked, ‘Who will steady the ship at Buckingham Palace?’

Below is a roundup of the international reaction: 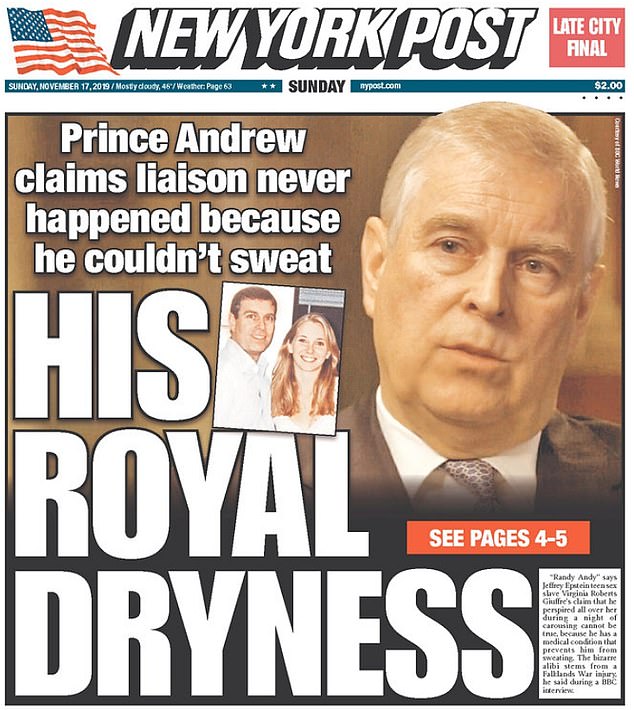 The New York Post headlined their front-page, ‘His Royal Dryness,’ savagely mocking the Duke of York’s claims that he was not Virginia Roberts’ sweaty dance partner, because he did not sweat. The paper wrote: ‘The interview, taped Thursday at Buckingham Palace – was a PR move so controversial, that Andrew’s newly-hired spin doctor, Jason Stein, quit after advising him not to go through with it. Queen Elizabeth and Prince Charles – who only learned of the interview on the day it was taped – were also not amused’

Prince Andrew Talks About His Ties to Jeffrey Epstein, and Britain Is Appalled: The New Times said that ‘viewers were left shaking their heads at the wisdom of consenting to a polite-but-relentless grilling by the journalist Emily Maitlis in the first place.’ It claimed that many of his statements were ‘defensive, unpersuasive or just plain strange.’ Mark Landler, writing in the paper, said that Prince Andrew should have learned from from the past experiences of his brother Prince Charles and his late sister-in-law Princess Diana. Landler cited Prince Charles’ infamous Jonathan Dimbleby interview in 1994, where he confessed unfaithfulness to Diana and Diana’s subsequent interview with Martin Bashir in which she said that ‘there were three of us in this marriage,’ a reference to Camilla Parker Bowles. 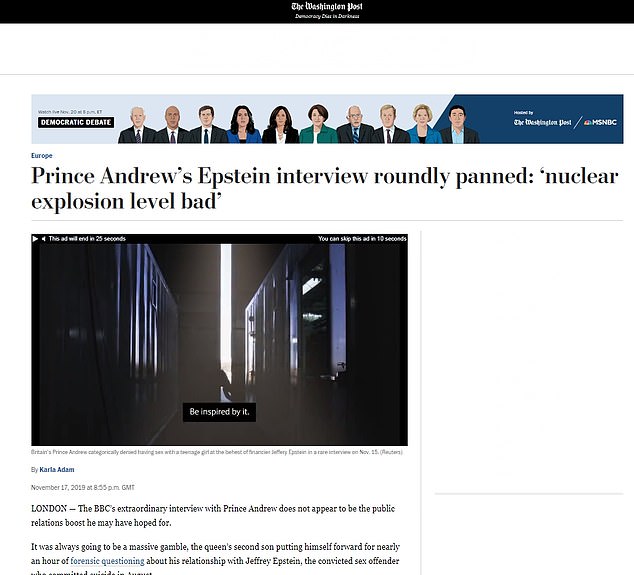 Prince Andrew’s Epstein interview roundly panned: ‘nuclear explosion level bad’: The Washington Post ‘s quote was attributed to royal expert Charlie Proctor, editor of the Royal Central website. ‘I expected a train wreck,’ tweeted Mr Proctor. ‘That was a plane crashing into an oil tanker, causing a tsunami, triggering a nuclear explosion level bad.’ Mark Borkowski, a public relations and crisis consultant, told the paper his advice to the Prince would have been to ‘100 percent absolutely not’ do the interview. ‘There was absolutely no reason for him to take such a leap of faith,’ the PR expert told the paper. Borkowski claimed that rather than douse the controversy it had fanned the flames and said some of Prince Andrew’s language was ‘unforgivable.’ 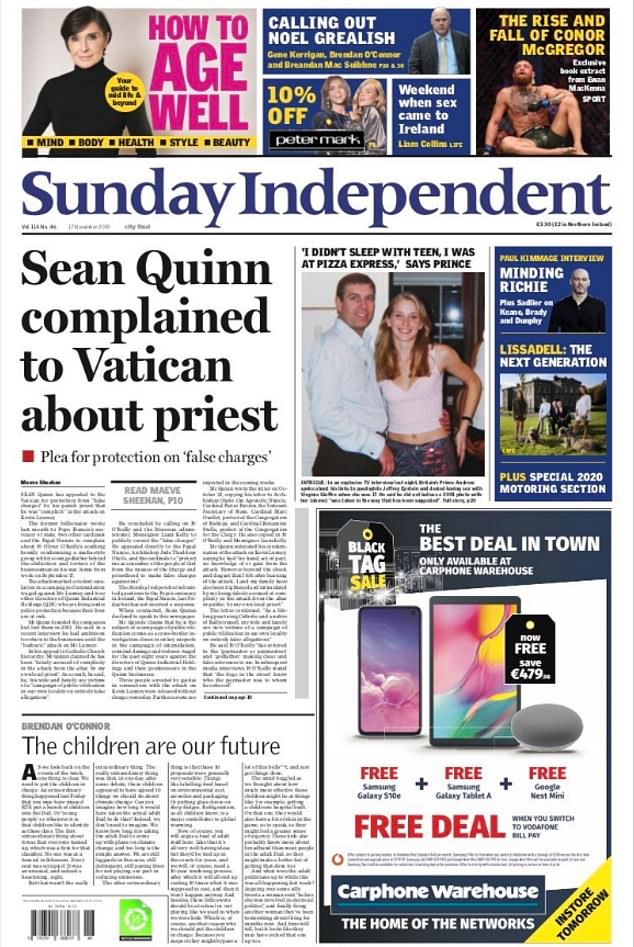 The Irish newspaper the Sunday Independent called it ‘an unprecedented 60-minute interview.’ It too zeroed in on the Prince’s claims that he had been at a Pizza Express in Surrey on one of the night’s Virginia Roberts alleges they were together. It also outlined the Duke of York’s position that the claim by Ms Roberts that she had been with him ‘dancing at Tramp nightclub could not be true because he suffered from a medical condition that stopped him perspiring.’ Patrick Sawyer wrote: ‘The duke threatened to reignite the controversy over his relationship with Jeffrey Epstein – the convicted sex offender – when he declared he had no regrets over their friendship.’

Epstein Affair: Prince Andrew’s ‘Pizza Alibi’: French daily Le Monde called it an ‘exceptional’ interview by the second son of the Queen. It referred to Emily Maitlis as an ‘uncompromising’ interviewer and said that the Duke of York ‘vigorously denied’ having sex with Ms Roberts. It outlined parts of Prince Andrew’s alibi: his inability to sweat, his taking Princess Beatrice to a Pizza Express in Woking and the infamous photo in which he said was unlikely to have taken place in London because he was not wearing a suit. 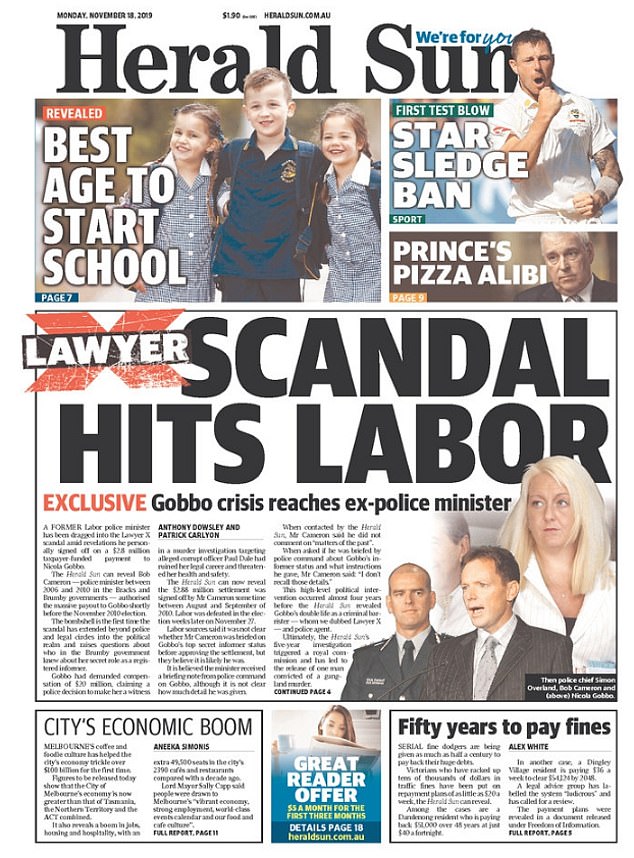 Melbourne paper the Herald Sun went for the ‘Prince’s Pizza Alibi’ in its article on the ‘train wreck interview.’ Richard Ferguson said that the interview had ‘shocked Brits as he appeared to contradict himself several times, laughed nervously while discussing the notorious child abuser and claimed to never have been a ‘party prince.” The Australian paper cited royal expert Richard Fizwilliams who called it one of the ‘biggest royal PR disasters ever.’ 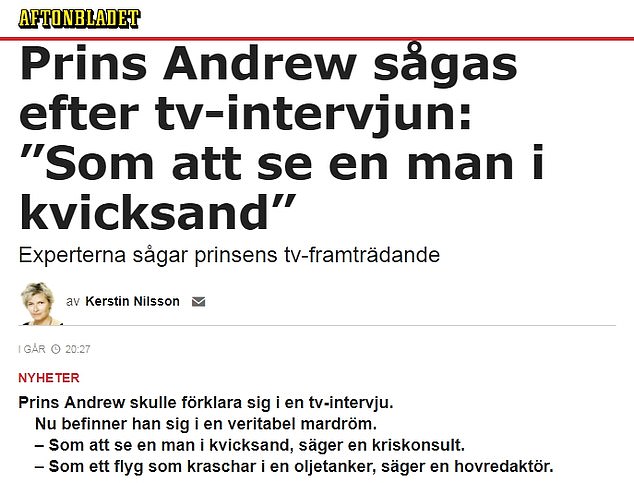 Prince Andrew watched in TV interview: ‘Like seeing a man in quicksand’: Swedish tabloid Aftonbladet referred to the ‘very rare’ interview with a British royal and quoted various experts from the UK who had called it ‘catastrophic.’ ‘How Prince Andrew will now clear up the situation remains to be seen,’ writes Kerstin Nilsson. ‘The British court is quiet. Very quiet.’

Prince Andrew shows himself to be repentant – and unaware: German news website, Spiegel, wrote: ‘Time and again, footage had surfaced showing Andrew with Epstein or at his New York estate – even after the multimillionaire had already served his first jail sentence for the allegations.’ It focused on the Duke of York’s remorse at having stayed with Epstein after he was convicted 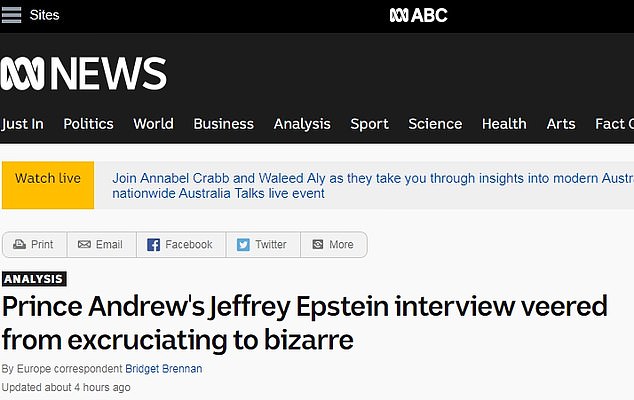 ABC News Australia said: ‘Prince Andrew’s Jeffrey Epstein interview veered from excruciating to bizarre.’ The broadcaster’s website article said: ‘It was supposed to be a sit-down interview to draw a line under months of critical coverage of his friendship with the billionaire paedophile Jeffrey Epstein. It did the opposite; the Duke of York came across as devoid of any self-awareness when he insisted it was “convenient” and “honourable” to stay at Epstein’s home even after the New York financier was convicted of sex crimes’

During the interview the duke denied he slept with Virginia Roberts Giuffre, Epstein’s alleged sex slave, on three separate occasions, twice while she was underage.

He said one encounter in 2001 did not happen as he spent the day with his daughter Princess Beatrice, taking her to Pizza Express in Woking for a party.

The same alleged sexual liaison, which the American said began with the royal sweating profusely as they danced at London nightclub Tramp, was factually wrong, the duke said, as he had a medical condition at the time which meant he did not sweat.

Prince Andrew twice stated his relationship with Epstein had provided ‘seriously beneficial outcomes’, giving him the opportunity to meet people and prepare for a future role as a trade envoy.

And he cast doubt on the authenticity of a picture that appears to show Andrew with his arm around the waist of Ms Roberts, when a teenager.

‘So it’s very difficult to be able to prove it but I don’t remember that photograph ever being taken.’

He expressed regret at making contact with Epstein in 2010 – flying to New York to say in person the friendship was over – after the 66-year-old had been released from an 18-month prison term for prostituting minors.

Pilot James Nixon calls out feral passengers – and reveals the...