The Prince of Wales and Duchess of Cornwall have arrived at Government House in Auckland to receive a formal welcome to New Zealand.

Members of the country’s armed forces gave them a traditional Maori welcome, where a dart was placed on the ground by a warrior for Charles to pick up in the wero, or challenge.

A call of welcome and haka followed, while Charles took the royal salute and inspected the guard.

It seemed the Duchess had picked the wrong hat for the occasion, with a Maori warrior wincing as it pressed against his forehead during the greeting.

They are on an eight-day tour of New Zealand and the official welcome marked the start of day two of the tour. 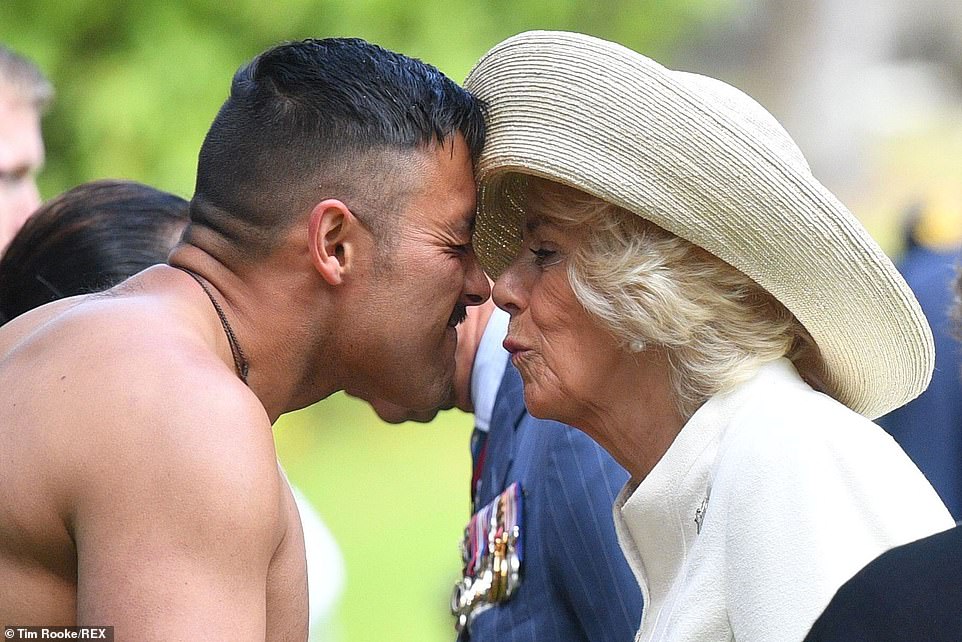 Camilla, Duchess of Cornwall receives a hongi from the ceremonial warrior as she and Prince Charles attend an official ceremony of welcome at Government House in Auckland 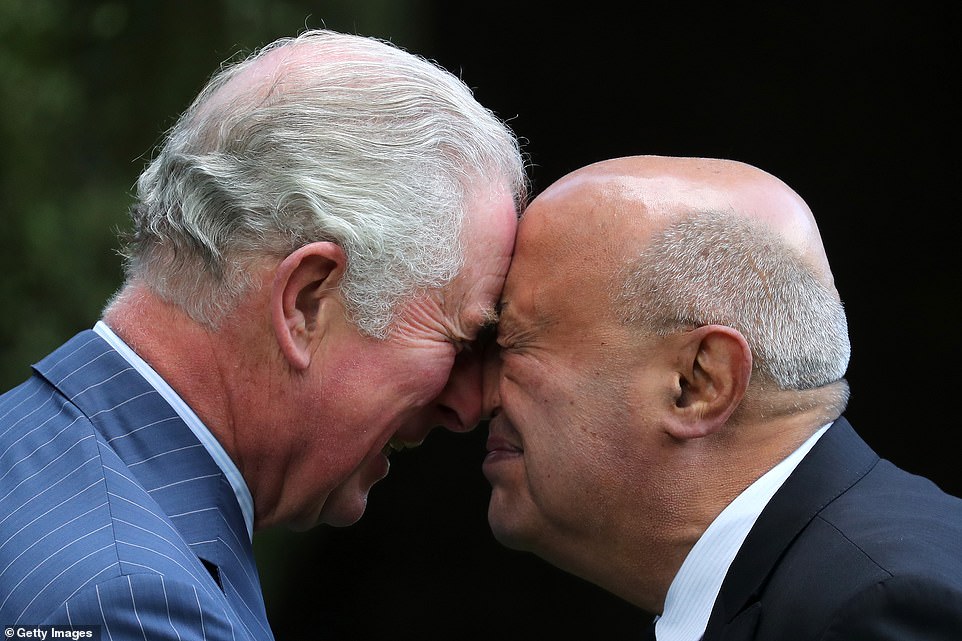 Prince Charles, Prince of Wales receives a Hongi, traditional Maori greeting, as he attends the Ceremony of Welcome, Government House in Auckland today 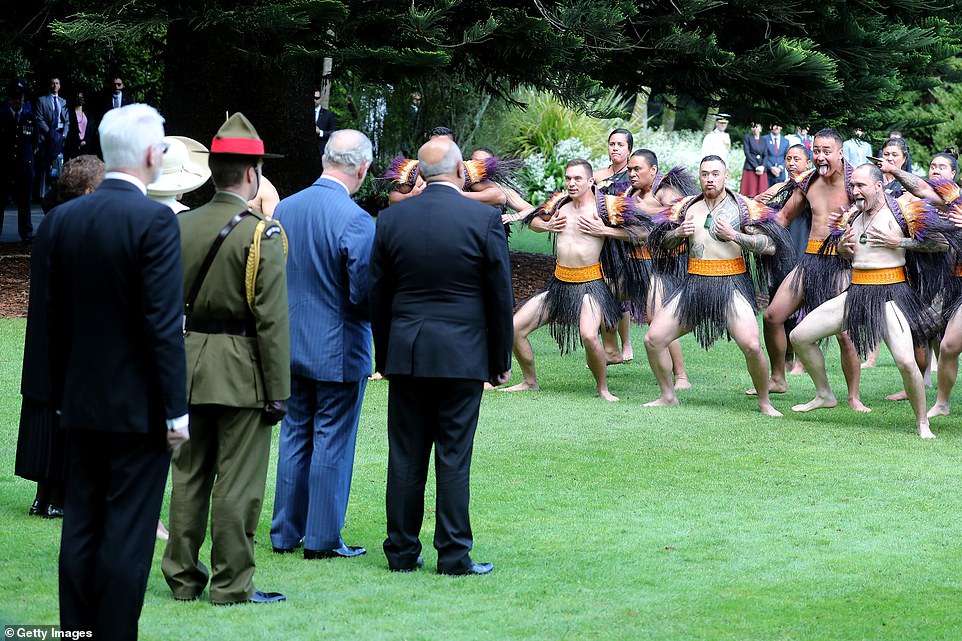 The Prince of Wales and Duchess of Cornwall are on an 8-day tour of New Zealand. It is their third joint visit to New Zealand and first in four years 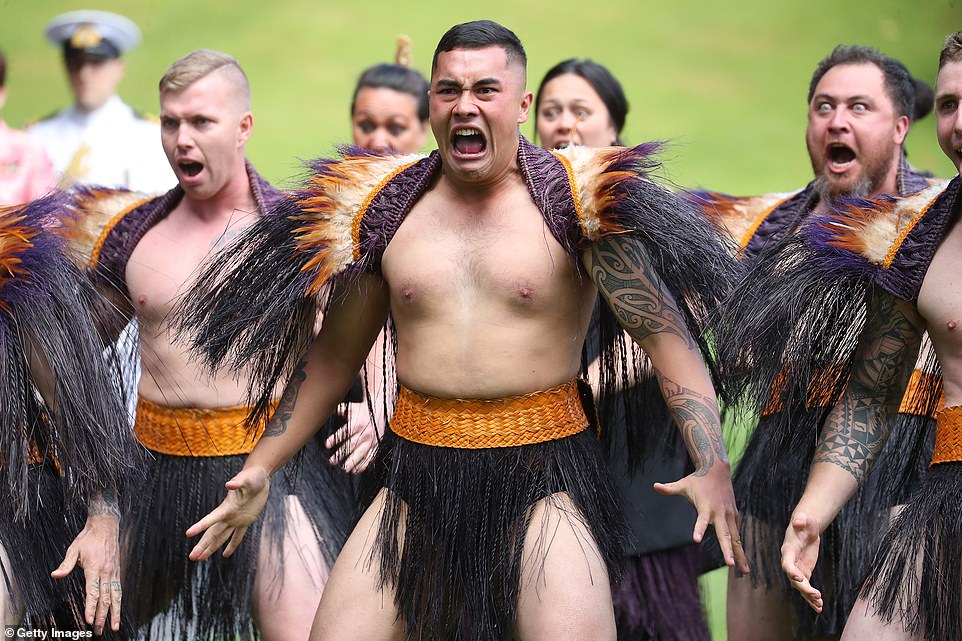 Maori dancers perform for the arrival of Prince Charles, Prince of Wales and Camilla, Duchess of Cornwall ahead of a Ceremony of Welcome, Government House

Charles, 71, and Camilla, 72, undertook a whirlwind tour of engagements during their first day of their eight day royal tour of the country, including meeting children at a local community centre and laying a wreath at Mount Roskill War Memorial in Auckland.

It is the couple’s third visit to the country, after visiting in 2012 to mark the Diamond Jubilee and again in 2015.

The first full day of the tour to New Zealand began on a solemn note, as the couple paid tribute to those who had served the country at the Mount Roskill War Memorial.

Crowds peeked through the trees at the suburban Auckland site, while Charles laid a wreath with the message ‘in solemn remembrance’ on the cairn.

The site also contains a memorial to men from the Pacific island Niue who fought alongside the 3rd Maori Contingent in the First World War, with 150 men having departed for Auckland on the SS Te Anau on October 13, 1915. 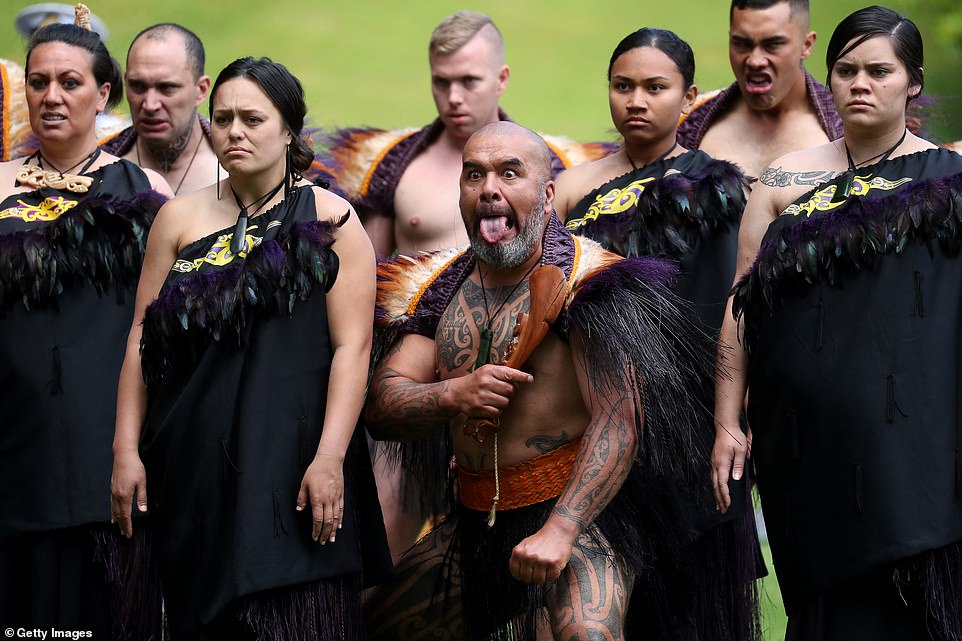 Maori dancers perform for Prince Charles, Prince of Wales and Camilla, Duchess of Cornwall at a Ceremony of Welcome, Government House in Auckland 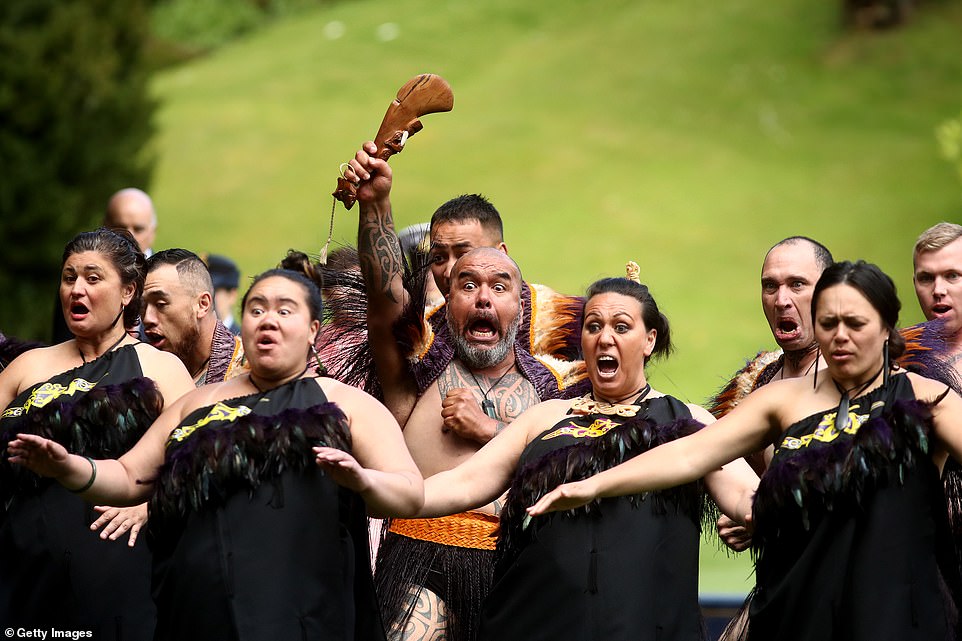 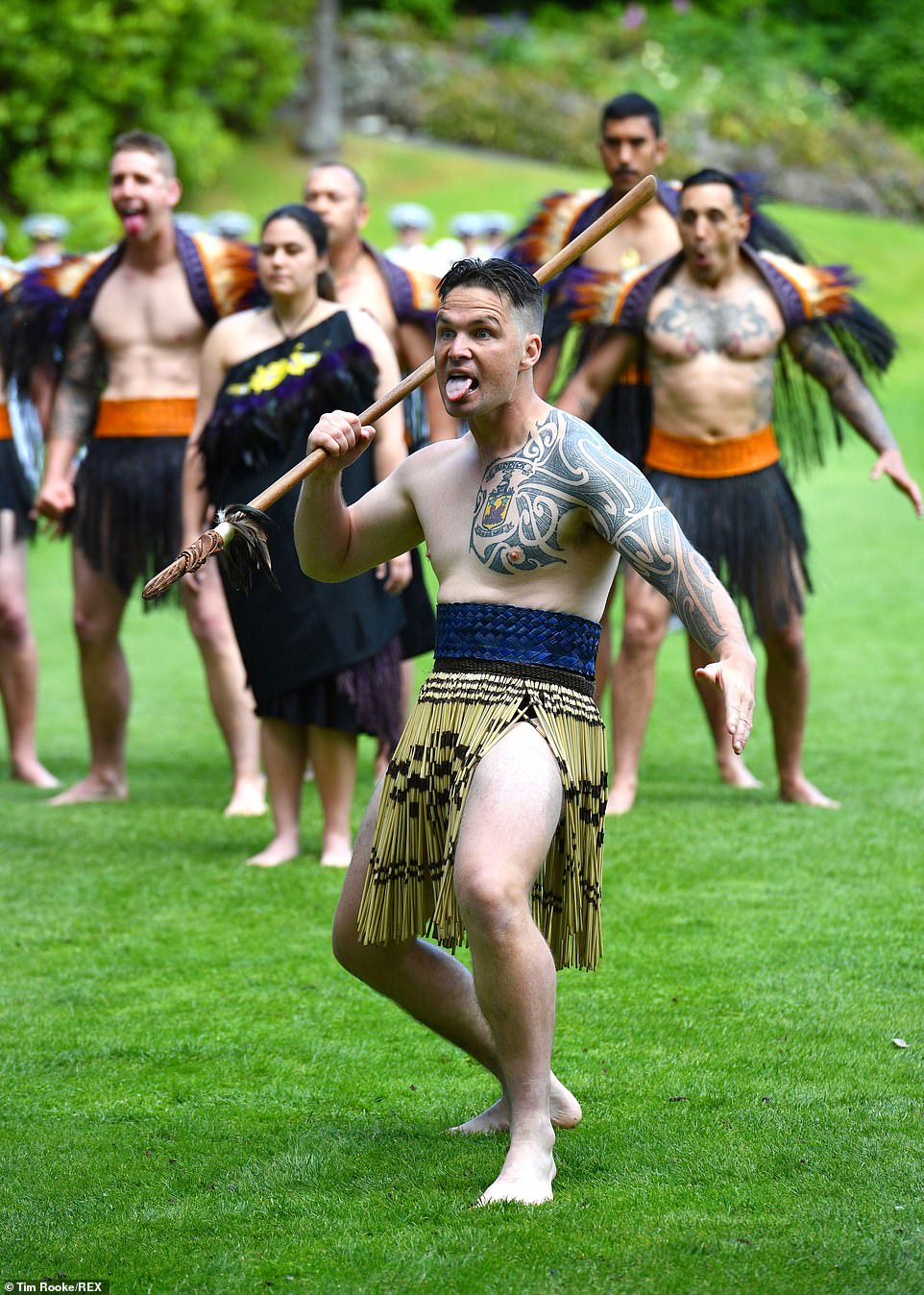 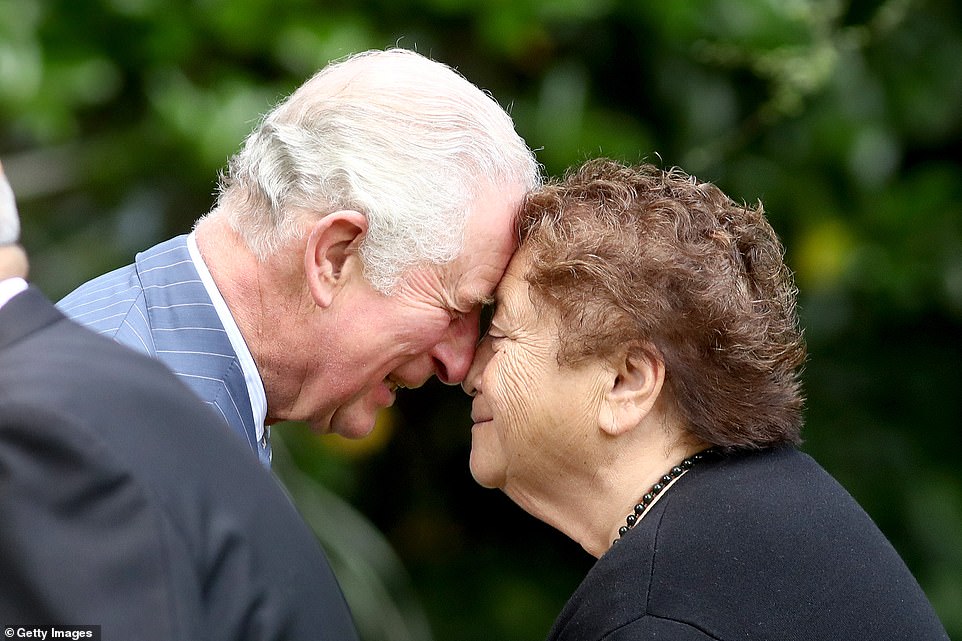 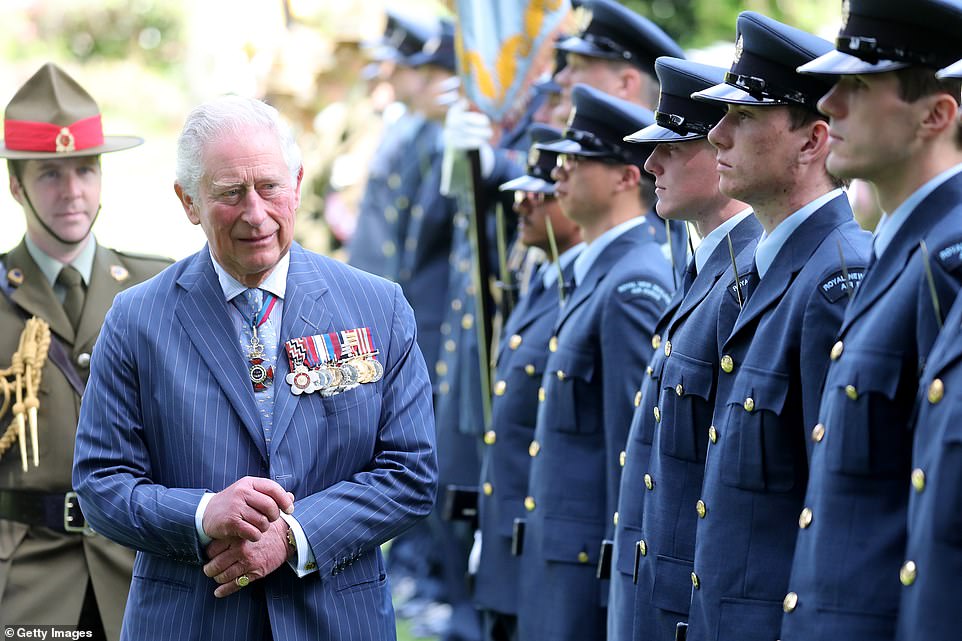 Prince Charles, Prince of Wales inspects the Guard during the Ceremony of Welcome, Government House today in Auckland, New Zealand 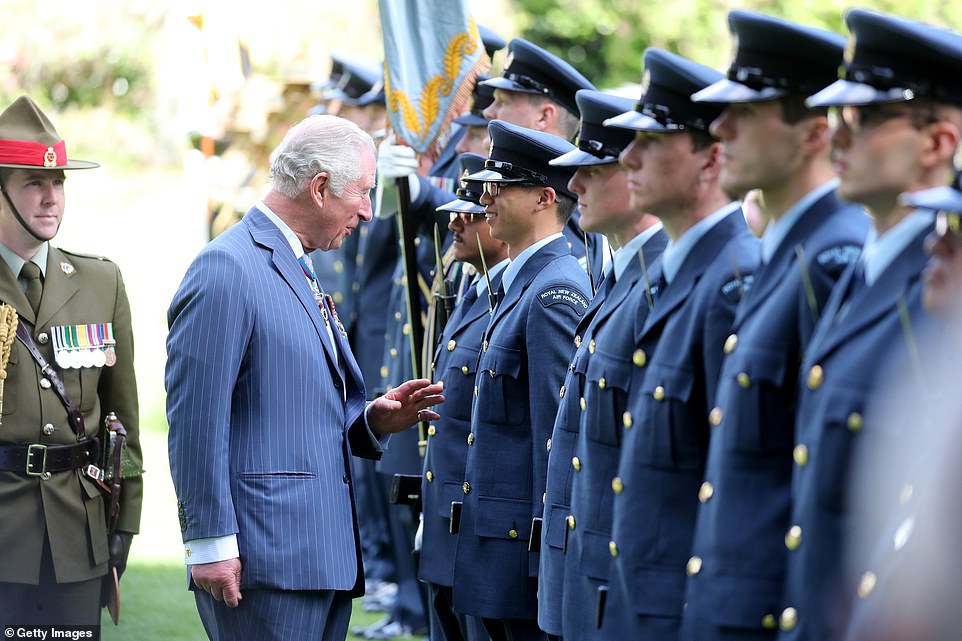