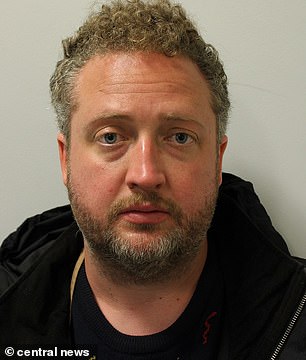 A real life ‘Psycho’ who battered his cheating girlfriend to death in the shower after she told him to stop dressing in women’s underwear when they had sex is facing a life sentence.

Just like the character in the classic Hitchcock film, Roderick Deakin-White, 38, loved to dress in women’s clothes and even had a Facebook page featuring him as an alter-ego called ‘Jane.’

When victim Amy Parsons, 34, told him they were finished unless he ditched the lingerie, he attacked her as she showered with a metal ‘chin up’ bar.

‘I remember hitting her when she was still upright. I remember her slipping and then she was lying in the bath. And I hate the sight of blood.’

The couple had been together for eight years before City PA Ms Parsons tired of his fetish which left her unable to orgasm and started seeing work colleague James Saunders.

She had decided to leave Deakin-White for Mr Saunders and told the killer moments before she showered to get ready to go to him.

The last message the Australian ever sent on her phone was a love heart to her new boyfriend. 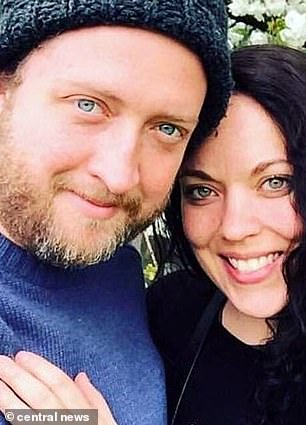 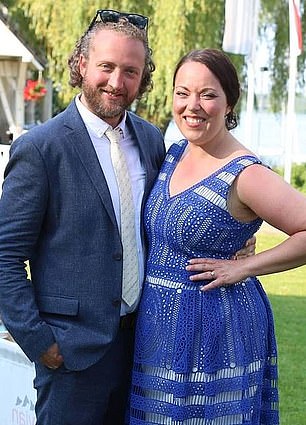 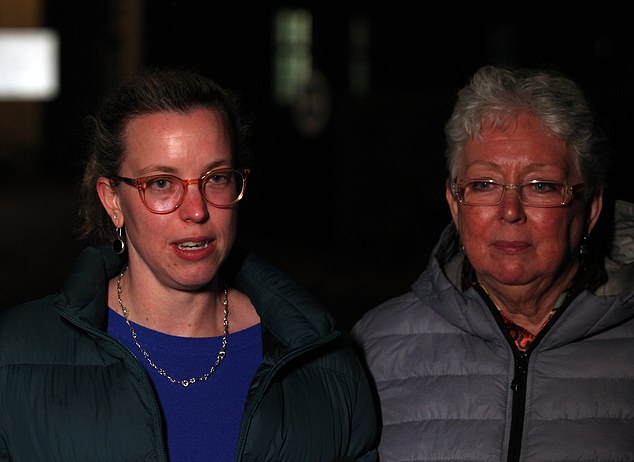 Deakin-White repeatedly struck her over the head with the two foot long exercise bar, showering blood over the bathroom.

He left her in a pool of blood in the bath and waded into the Thames in an apparent suicide attempt but was unable to go through with it.

A stranger persuaded him to turn himself in to police and he told officers: ‘I’m a f***ing murderer.’

At their apartment in Whitechapel, East London, officers found Ms Parsons still lying in the bath.

The killer, who had worked as a graphic designer at the Royal Opera House, admitted manslaughter but a jury convicted him of murder.

Deakin-White claimed he lost control when Ms Parsons told him she would abort his child if she became pregnant and that her new lover ‘knows how to handle me’.

Dressed in a smart navy blue suit he stared ahead and showed no trace of emotion as the verdict was delivered. 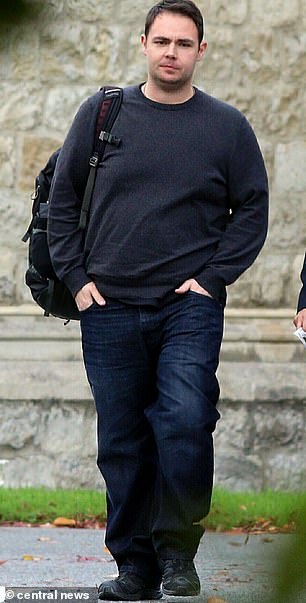 Judge John Lafferty told the jury: ‘The murder itself was dreadful, a ghastly killing.

‘This naked woman was deliberately bludgeoned in the face, naked and unable to defend herself.

‘This man intended to kill her, let alone do her serious bodily harm, multiple blows around the face and head were calculated to kill.

‘Quite clearly you saw through all the obfuscation to find a guilty verdict.’

Deakin-White told jurors he was abused by a family friend who made him wear women’s clothes when he was a boy.

He said he had a distinct memory of ‘putting on a slip’ in primary school when he was about 10.

The killer regularly wore women’s underwear, stockings and make-up during his relationship with Ms Parsons.

‘It was sort of something that I did not all the time, but I did do it when we had sex sometimes.

But Ms Parsons had tired of the fetish and started seeing Mr Saunders.

Gareth Patterson, prosecuting, said Deakin-White was not working at the time of the killing and was reliant on his fiancée for financial support.

‘She was working as a personal assistant to a manager in an insurance company in the City. It was Amy Parsons who paid the rent for the flat every month.

‘The evidence suggests he was reliant on her. At times he had depression although he had chosen not to take medication. His dependency on her appears to have been both emotional and financial. 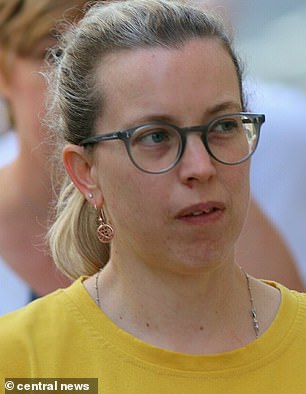 ‘She was unhappy about the fact that he liked to engage in cross-dressing – dressing in women’s clothing – when they were being intimate together.’

Ms Parsons had coffees with Mr Saunders at Old Mutual, the insurance company where they worked together.

Romance blossomed over lunch at Australian restaurant Caravan after she told him it was her favourite place to eat in London.

‘Amy and I had a rapport where it was like gentle ribbing, like a bantering relationship a lot of it,’ Mr Saunders told the jury.

‘I remember thinking if she wasn’t in a relationship I would pursue her because she would be the right person to be with so I knew what I want but I was trying to do the right thing for her,’ he said

They continued flirting until they first had sex on 14 April. Less than two weeks later Ms Parsons would be dead.

Deakin-White confronted her after reading WhatsApp messages between the pair.

Ms Parsons messaged her new lover saying Deakin-White had asked if they had slept together but that she had said: ‘no, not as such, he’s just been solid for me’.

On April 16 she had admitted the affair to Deakin-White and told her new lover in a text message: ‘James everything is out there, he was stalking my profile and he saw I was online.’

She added: ‘You make me feel happy, comfortable, safe, wanted and needed, all wonderful things. Thank you. You’re so lovely.’

Referring to the later messages, Mr Saunders said: ‘She was struggling to hold it together.

‘Whenever I spoke to her that whatever the conflict was inside her head was really stressing her out.

‘She made references to being in the flat and said something like I’m a prisoner and it sounded like Roderick was pleading with her not to go but she went anyway.’

In the days before her death Ms Parsons sent distraught messages to her new lover saying the deteriorating relationship had left her a ‘broken woman’.

‘I’ve had nothing in my life for so long and I don’t want to go back to it.’

Ms Parsons had resolved to dump her fiance on the night she was killed by Deakin-White.

Mr Saunders said: ‘We had told each other we had loved each other at that point and she had made up her mind that she was going to end things with Rod.’

Deakin-White told his friends his love rival was a ‘bastard, creep, and bloody nobhead.’

He said Ms Parsons was a ‘sneaky bitch’ and a ‘nasty, nasty person’ and warned he was going to do ‘something stupid.

The victim messaged Deakin-White saying she needed to ‘sort her sh-t out’ before going home to confront the killer on the 25 April.

The victim messaged her lover that evening after Deakin-White stormed out of the flat saying: I don’t know how tonight is going to pan out. He’s not accepting anything I say.

‘He’s gone to the shop and he’s trying to make all these changes and grand gestures and I’m like no I don’t want it.’

Half and hour later he messaged her again, but Ms Parsons was probably already dead.

Deakin-White said they shared a bottle of prosecco and half a bottle of wine on their balcony when she told him she was leaving him that night for her new lover.

He said he begged her not to leave but she told him: ‘Give me my toothbrush’ and took a shower.

‘I’m pacing between the door and the hall way and I pick up the thing I pick it up and yeah, I lose it, I start hitting her with it,’ he said.

‘She’s facing the shower and I started hitting her I’m not doing it, it doesn’t seem real.

‘I can’t stop I want to stop but I won’t let me I’m doing it and I know its…I can’t stop doing it I’m hitting her over the head.’

‘I didn’t stop until I thought she was dead. I left the bathroom, it was suddenly over, and I kind of regained my sense of where I was,’ Deakin-White said.

‘I don’t know when I regained full control, I was certainly in shock. I was certainly confused when I left I wasn’t sure it had happened. I don’t think I was in control until I left the flat, it was reflex to turn off shower.’

He told jurors he believed the ‘gurgling’ noises of blood in Ms Parsons’s throat must have been her last breaths.

‘I was totally in shock about what I just did, it’s quite a traumatic thing to have happened, to talk about and get your head around,’ he said. ‘I thought I had killed her, that I was a murderer, the only thing on my mind was to kill myself.

‘It didn’t seem real and again for the life of me I do not remember the blood and that’s the truth.

‘I have got to live with that but Amy can’t even live at all. I am a barbaric monster but, there are not buts, it’s disgusting.’

A neighbour heard a piercing ‘two to three minute’ scream from the couple’s apartment on the night of the killing but did not call the police.

‘It was a brutal attack on a woman who, while she was showering, was obviously unarmed and wholly defenceless, a woman who was entitled to feel safe and secure in her own home, the prosecutor said.

‘His actions suggest that he had got to the stage where he basically thought – if I can’t have her, nobody else will have her.

‘The attack however did not immediately kill her. The evidence suggests she was still alive in the minutes that followed the defendant’s blows.’

Deakin-White left the flat, pausing to set the burglar alarm and was next seen wading into the Thames at Shadwell. Deakin-White, of Whitechapel, east London, denied but was convicted of murder.

He was remanded in custody ahead of sentence on 26 November at Snaresbrook Crown Court.