A driver has revealed a clever way of de-icing a car windscreen – and it involves nothing more than an empty stain remover bottle.

Angela Hickling, from Nottingham, shared a photo and video of her unique method to Facebook, alongside the caption: ‘I’m a genius, get yourself one of these bottles, fill it with warm water and you’re sorted.’

‘No cold hands scraping anymore and it cleans your windscreen too – the brush bit is ideal.’

And many motorists took to the comments section to share their appreciation of the post – with many branding the idea ‘genius’ and ‘amazing.’

‘I’ve got these bottles. It’ll be great for the morning,’ penned one, while a second wrote: ‘I did this this morning for the first time. It was great!’ 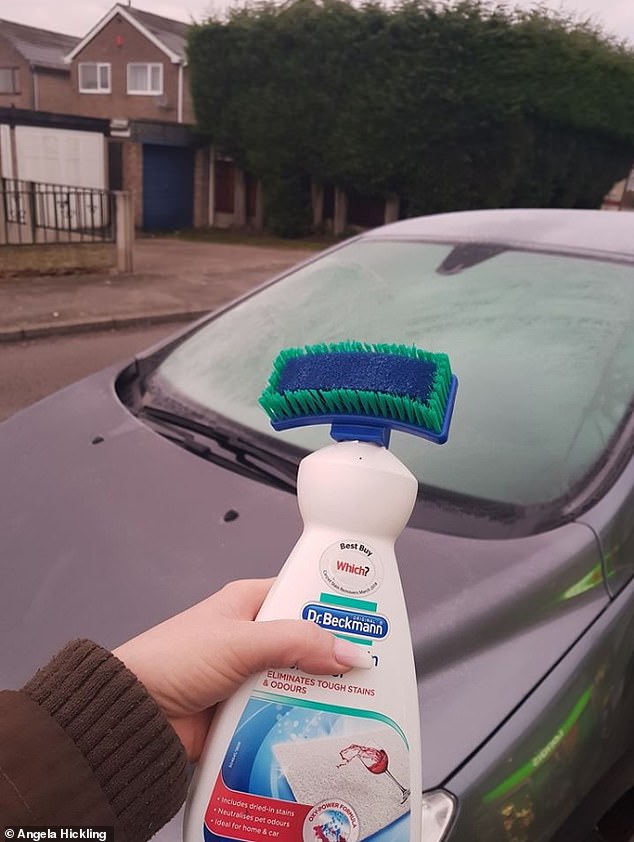 Angela Hickling, from Nottingham, shared her genius hack to Facebook, which involves nothing more than an empty stain remover bottle (pictured) 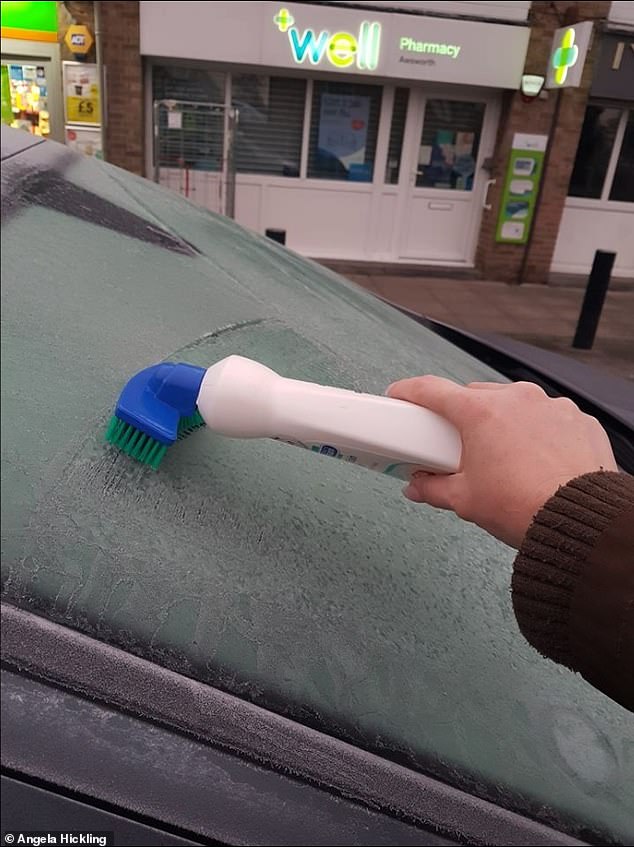 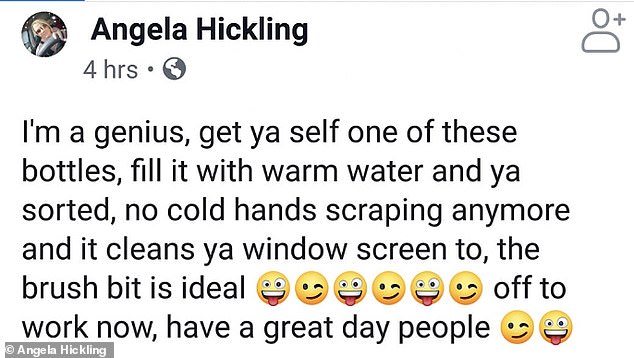 A third added: ‘We do this and it works in seconds,’ while a fourth commented: ‘It’s so good, isn’t i?’

The thrifty driver opted for Dr Beckman’s carpet stain remover bottle, which features a handy brush attachment that she insists acts as a the scraper for the windscreen.

She explained how you simply fill the bottle with warm water, before moving the brush head over the windscreen in a bid to melt the ice.

‘That’s amazing, you b**** genius,’ enthused a further, while another admitted: ‘Nope, I would have never thought have that! Honestly going to buy one just for that reason.’ 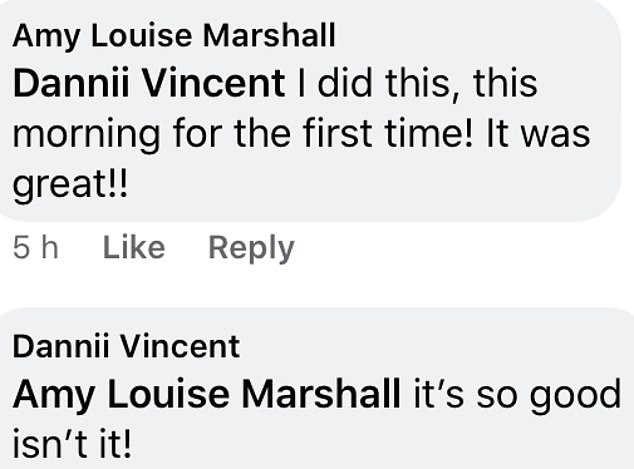 Many took to the comments section following Angela’s hack and confirmed: ‘We do this. It works in seconds’

And Angela isn’t the first to take to social media in recent days to share their handy hacks for conquering the chilly weather conditions.

Posting under the handle ‘Barbe Noir’, a man from the UK posted a TikTok clip to Twitter which shows someone filling a resealable plastic bag with hot tap water, before using it to wipe away the melted ice.

However, while some branded the ideas ‘genius’ and joked they should have a ‘degree’ from how much they’ve learned from social media, others argued it could cause damage to the windscreens.

Responding to the water in a bag video, which racked up an impressive 54,000 re-tweets, one person wrote: ‘If you put something hot to something cold, it will expand and cause the window to burst and even crack,’ while another penned: 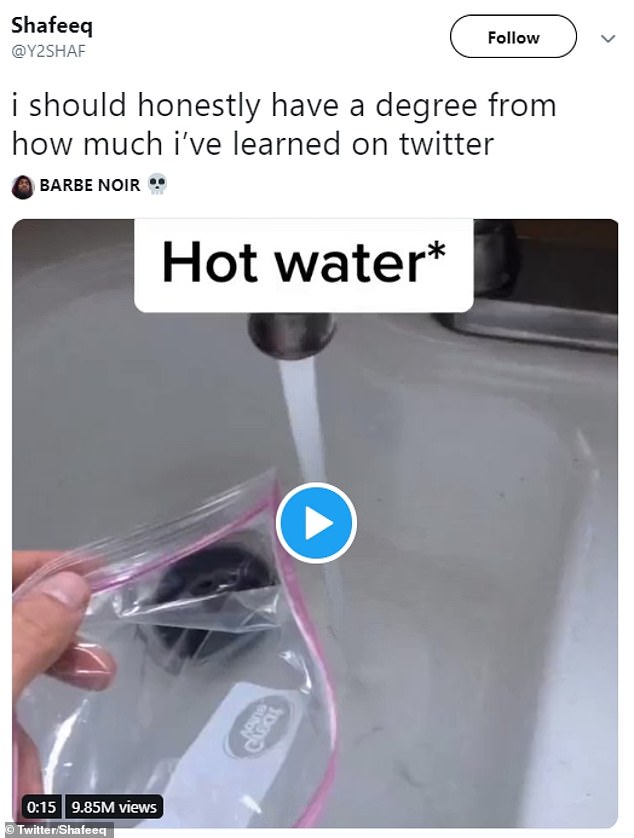 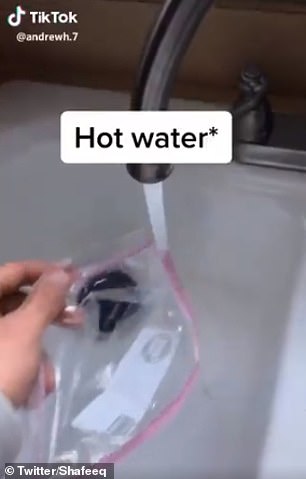 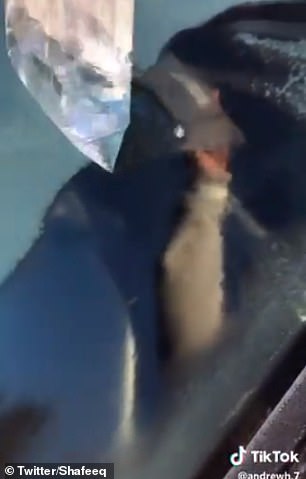 The TikTok clip sparked a debate after being shared on Twitter. The much-watched video shows someone using a bag filled with hot water on their frozen windscreen

‘Not only is there a chance this will crack the glass, but how lazy are you that you’d rather use a single-use piece of plastic than defrost your car for a few minutes in the morning?’

However, those defending the quick and easy tip admitted they’ve spent years using hot water to melt the frost on their windscreens.

‘Everyone saying “but the glass will smash due to the heat difference” Really? because I’ve been using boiling hot water straight from the kettle for years and never had a single problem haha,’ wrote one, while a second commented:

‘I throw hot water on mine all the time, the windscreen will only crack if you have other chips or crack in it. They are made to expand slightly.’

A third argued: ‘You can literally just use cold water and it still clears the ice/frost’

A number of responses to the thread came from those who were concerned that using boiling water could cause an icy windscreen to shatter, but others have since defended the idea