An NHS hospital is cancelling operations because of ‘intense pressure’ on its A&E department.

Northampton General Hospital said it will postpone some of its non-urgent planned procedures which would require the patient to stay in overnight.

The trust running the hospital has not revealed how many people will be affected but it carries out more than 15,000 operations during a typical four-month period.

It said that, on some occasions, almost half of the patients who turn up in its casualty unit department don’t need to be there and many just have chest infections.

The ‘drastic’ surgery cancellations will continue until March next year, the Health Service Journal reported.

At the beginning of September, NHS statistics show, there were 26,028 people waiting to start treatment at Northampton General. 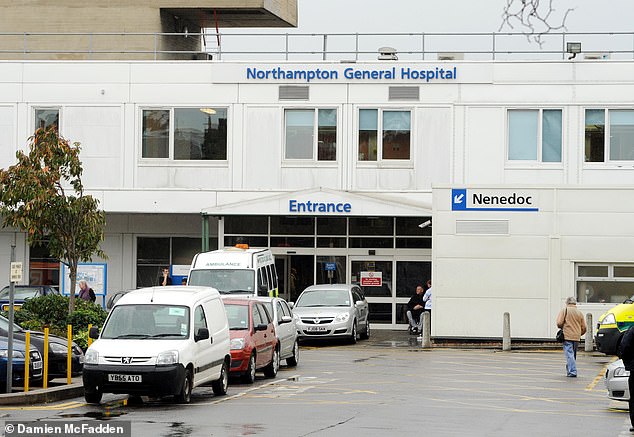 Deborah Needham, deputy chief executive of the trust said: ‘Unfortunately due to the pressures on our A&E department we have had to take the decision to cancel non-urgent operations which require an overnight stay with us.

‘We would like to apologise to anyone affected by these cancellations.

‘We do not take this decision lightly and only do this when we need those beds to treat the sickest patients in our community.

‘We will contact anyone affected and reschedule these operations.

‘Our teams are working extremely hard to provide the best care for patients and will continue to do so over the winter period.’

A spokesperson for the Northampton General Hospital Trust told the HSJ: ‘We are working to prepare for these pressures in a more structured way to help us to avoid cancelling surgery at short notice.

‘We know previously that this has caused a lot of frustration for patients, some of whom have been cancelled multiple times, which we believe is an unacceptable way to treat our patients.’

The Northampton General’s announcement comes as NHS statistics revealed this month that the waiting list for planned surgery is the longest it has been since records began.

Nationally there are 4.42million people expecting routine operations, which could include many waiting in pain for hip or knee replacements.

That figure was 3.83million in September 2017 – a rise of more than half a million people in two years because hospitals can’t process the patients fast enough.

President of the Royal College of Surgeons, Derek Alderson, said Northampton General was not the only hospital facing such tough decisions.

He told the HSJ: ‘It is very worrying to hear that an NHS hospital has taken the drastic step of cancelling, for the next four months, planned surgery requiring an overnight stay. NHS data for England showed the number of people waiting for routine surgery in September – the most recent statistics – is at a record high for the sixth time this year, with 4,420,000 people on the list

Almost 70,000 NHS operations were cancelled in England last year due to a lack of beds, staff or equipment, according to statistics.

The numbers, obtained last December by the Daily Mirror through Freedom of Information requests, were described by Labour as ‘nothing short of a scandal’.

And the true total could be higher, as only 138 out of 170 NHS trusts responded to the paper’s query.

‘In September 2019, there were 4.42 million patients on the NHS waiting list — the highest ever. The answer to this is not to cancel surgery.’

Northampton General Hospital NHS Trust said it would work with other hospitals, and private providers, in the area to try and get patients treated elsewhere.

The cancellations would affect all departments except those treating cancer patients and emergency surgery, and that the hospital would still try to complete day procedures.

It took the pre-emptive step to avoid cancelling operations at short notice when pressure mounted, which it said had ’caused a lot of frustration’ among its patients.

In a statement on October 15 in which she mentioned cancelling operations, Ms Needham said: ‘Yesterday 46 per cent of people who came to A&E could have gone elsewhere for treatment.

‘We are urging people to use other NHS services and make the right choice.

‘We are seeing a lot of people come into our A&E with chest infections which could have been treated sooner had people visited their pharmacist or GP.

‘By seeking advice sooner you or your loved ones may be able to prevent your condition worsening and needing to come to hospital.’