This is the shocking moment a toddler is left lying in the road after falling out of a moving taxi.

Kris McGrory, 38, a volunteer support worker, witnessed the frightening tumble in Earlsdon, Coventry at around 3.15pm on November 6.

His dashcam captured the aftermath of the fall, showing a woman, possibly the youngster’s mother, rushing from taxi to collect the child. 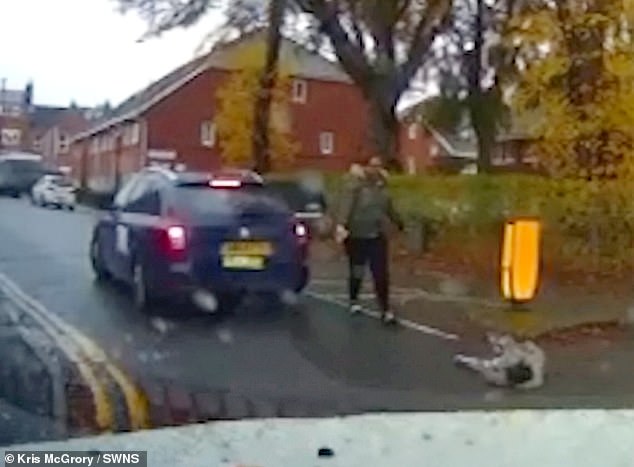 Kris McGrory, 38, a volunteer support worker, witnessed the frightening tumble in Earlsdon, Coventry on November 6 (the aftermath is pictured on his dashcam) 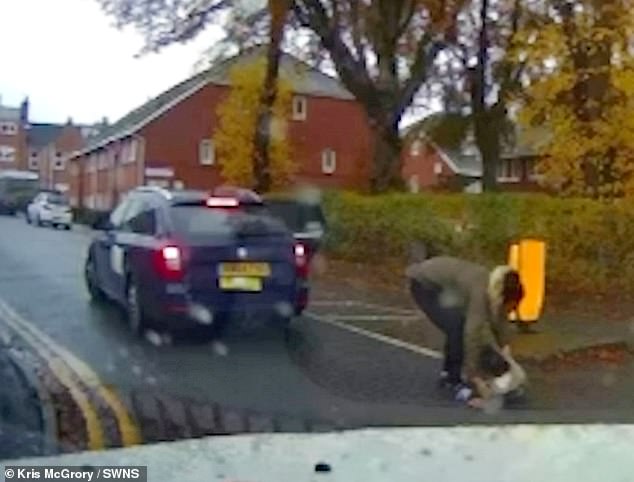 Mr McGrory’s dashcam captured the aftermath of the incident, showing a woman, possibly the youngster’s mum rushing out of the taxi to collect the child (pictured)

She desperately waves her arms in an attempt to alert other drivers to the stricken youngster before scooping the youngster back up and carrying him back to the taxi.

Mr McGrory said: ‘I had just left my apartment and literally just turned around the corner and noticed there was a taxi in front of me.

‘He was driving quite slowly, luckily, and I didn’t really think any more of it. 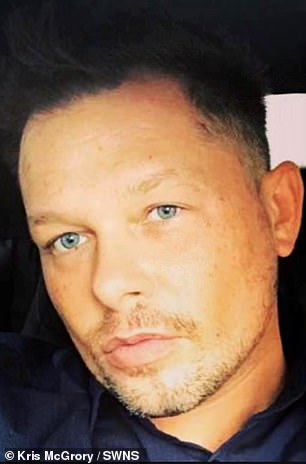 ‘To get out where I live there is a sharp left turn and the taxi was about four or five car lengths in front of me.

‘They have gone around the corner and the door has just swung open suddenly.

‘I didn’t think too much of it at first, but then a split second later, a kid falls out.

‘I would say he looks about three years old, tops. He looks quite big in the video but he was a toddler.

‘He fell out and rolled on the floor. I had to brake quite quickly.

‘She came out on and was waving at cars to stop because she was probably a bit worried that they were gonna run the kid over.

‘But then she just literally scooped the kid back up, got back in the car and off they went.’

Mr McGrory said he didn’t think the child was injured in the fall, saying the car had been travelling quite slowly when the youngster fell out.

He added: ‘Realistically, falling from that high at around 15 miles an hour, I mean, I know what speed can do to people.

‘I’m shocked he didn’t bang his head really hard as he fell.

‘I would have liked to have thought she had his head seen by a doctor. He had a thick coat on and maybe that could have done him some favours. 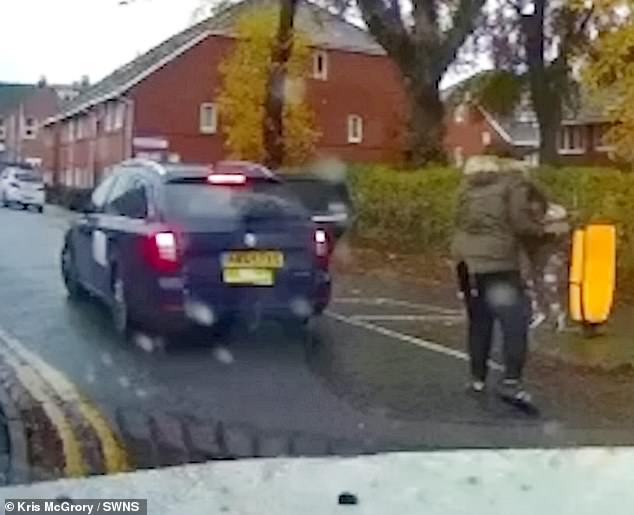 Although Mr McGrory believes the taxi was being driven normally at the time of the fall, he says the incident shook him up due to being a father himself (pictured, the woman picks the child back up following the fall)

‘Someone was looking over him that’s for sure.

‘If I had been going any quicker or been any closer then it wouldn’t have been a very nice situation at all. The mum literally just got back in the car and went.

‘When it first happened she jumped out and waved her hands around as if to say stop, stop stop. You can’t see that on the dashcam for some reason, I don’t know if another car blocked the view.

‘The road is a one-way system around there so you have to go left.

‘Every car leaving that area would have all had to have flown up there.

‘I could only imagine that he didn’t have a seatbelt on and he must have been playing with the door at the same time.

‘I’m sure it happens to a few people, but when you see it happening, its a bit of a different ball game, isn’t it?’

Although Mr McGrory believes the taxi was being driven normally at the time of the fall, he says the incident shook him up due to being a father himself.

‘It’s a bit of a kick up the bum to keep an eye on what the kids are doing in the car,’ he said.

‘I have four kids myself and I have told them a few times ‘don’t play with the door’ but that really takes it home.’

Cyborgsoldiers: Plan to create deadly ‘machine humans’ by 2050 outlined in...

The gloves are OFF: Boris Johnson limbers up in the boxing...