Seriously, was that all? Political parties usually uncork the premier cru champagne, figuratively speaking, when launching their election manifesto. But the Lib Dems’ little jamboree, if you can even call it that, had all the fizz of cheap spumante.

Party leader Jo Swinson looked like an actress dragging herself through a sleepy matinee performance. She tried to fire the flintlocks the best she could but the sparks wouldn’t fly.

The one mercy was that she spoke for only 15 minutes.

Camden Town was where we laid our scene, that delightfully bohemian enclave of north London where the air is always pungent with the tang of street dealers’ cannabis. 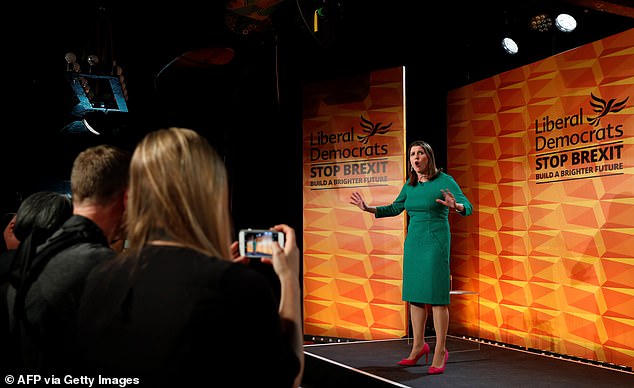 Jo Swinson spoke for just 15 minutes during the party’s manifesto launch in a bar in Camden town, London, on Wednesday

The Lib Dems had chosen a dingy bar inside the Old Market. Hardly the sort of place one would bring the in-laws for afternoon tea. Insalubrious latrines and surfboards hanging from the ceiling. I daresay the words ‘live music’ are othertimes touted on billboards outside with ill-deserved enticement.

Leaderene Swinson’s warm-up act was a couple of candidates. First it was Daisy Cooper, a gassy sort standing in St Albans – 20-odd miles up the M1. Not her first rodeo in front of the microphone, judging by her enthusiasm. ‘How many people have joined the Lib Dems this year?’ she asked. A solitary hand was raised. ‘So, as you can see, we’re a party on the up!’ she yelled.

Second man on was Matt Sanders, candidate for Hampstead, a bald, sinewy creature – a proud vegan was my (maybe unfair) guess.

Ms Swinson’s eventual arrival was greeted with pumping music, with the sole lyrics on loop being ‘Let’s go!’ She bounded on to the stage in an emerald green dress and neon pink clackers.

‘Hey, it’s still only 5.30. Plenty more places you can go out in Camden tonight!’ she told the gathered throng. The evening had taken on a distinctly Club 18-30 flavour. 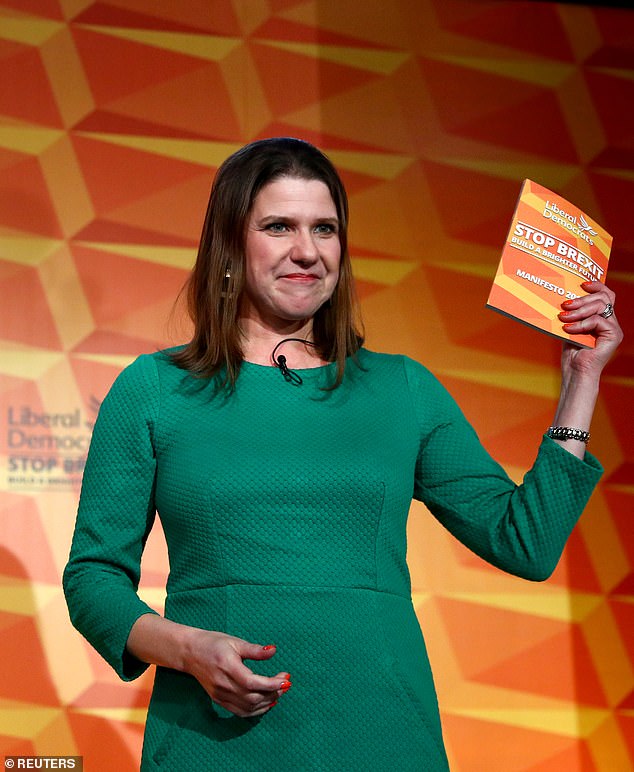 She laid into her two rivals. Boris got a harder time. He was mates with Trump, Farage and Tommy Robinson, the extreme-Right hoodlum, apparently.

The PM had also lied to the Queen, Swinson gasped, though I’m not sure too many Lib Dem supporters would share her outrage on Her Majesty’s behalf.

Policy-wise we didn’t get much new. There was something called a ‘£10,000 Skills Wallet’ that sounded suspiciously like tax relief on skills training dressed up as a generous government ‘gift’. We were promised a policy development on ‘marijuana legislation’ but we weren’t, in fact, given a whiff.

Inevitably there was an apocalyptic climate crisis rant. Accompanied by a syrupy tale about the daughter of a friend of Swinson’s called Evie who had designed her own protest sign that read ‘Let’s treat a crisis like a crisis’. Such mawkishness was a reminder of how nauseously exploitative it always is bringing ‘kids’ into elections.

‘I won’t leave our children with a boiling planet,’ Swinson insisted.

It didn’t help that the bar in Camden at this point was hotter than Alicante.

As a finale, a cannon was meant to fire a cascade of confetti into the air. The dismal result was a sub-Blue Peter-made shower of shiny paper littering the audience. Limp.

She’s got gumption, Swinson, I’ll give her that. Certainly more backbone than her drippy predecessors.

The previous night she had been asked if she’d be prepared as PM to use nuclear weapons. There were gasps around the Press room when she replied gamely: ‘Yeah.’ Good for her.

But ‘Swinsonmania’? I see no evidence thus far.

Why do you feel so dreadful after a long-haul flight?

New poll slashes Boris Johnson’s lead by half in just a...