A woman who started an affair with a former fling just four months after she got married has revealed why she ultimately chose to remain with her husband.

After a string of failed relationships, the anonymous Australian woman married the ‘perfect’ man who was completely devoted to her.

But months after their wedding, she received a message from a former flame who she saw as her ‘soulmate’, saying breaking up with her had been a mistake and asking her to meet.

The woman told 9Honey how they secretly slept together during lunch breaks, before a chance phone call from her brother prompted her to end the affair and stay with her husband. 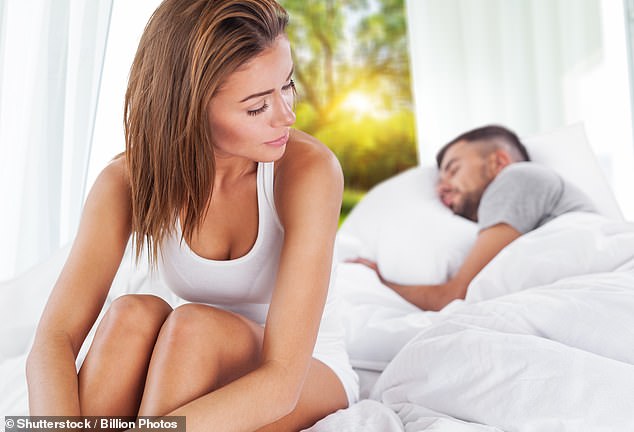 Is it ever okay to cheat on your partner?

After breaking up with her partner of 10 years, the woman was left ‘devastated’ and tumbled into a whirlwind romance with her brother’s best friend who she had known since childhood.

She felt the man was her ‘soulmate’, but their fling lasted just three weeks before he broke it off over fears her brother would not approve.

One year later, she met her future husband, a ‘gorgeous, devoted guy’ who would do anything to please her – but someone she wasn’t truly in love with.

Despite this, she accepted his proposal and felt ‘relieved’ to have found a man who was willing to commit.

But four months after their wedding, her ex contacted her to say he had made a mistake in ending their relationship.

Affluent women were 8 per cent more likely to be unfaithful to their husbands than middle class wives, while the prevalence of infidelity for poor and rich men was equal.

She agreed to meet, ‘knowing it wasn’t the right thing to do’.

After reconnecting, her feelings ‘really grew for him again’ and they started sleeping together at during the day when she was supposed to be at work.

But while the sex was good, the woman felt deep guilt for her infidelity.

‘It wasn’t exactly an enjoyable affair, although the sex was good, because I felt so guilty throughout it all,’ she said.

The turning point came when her brother called while she was in bed with her lover, prompting her to question her decision and end the affair.

What are the signs your partner is cheating on you?

These people will be going through the ‘we didn’t set out to hurt anyone’ and the ‘I love my partner but I’m not sure if I am still in love with them lines’.

They will start by talking about a new person at work, at golf or tennis club etc. and you won’t think too much about it until it starts to almost become awkward.

As the attraction grows, suddenly your partner stops talking about the random stranger who has crept their way into just about every conversation for the past few months. Then like magic, poof, they disappear and there is no mention of this mystery person.

The ‘Once Off’ Cheater

This type of cheater may just have a momentary lapse of judgement during an innocent break from the routine like a boy’s/girl’s trip, weekend away or business trip.

Signs of this cheater include them becoming standoffish and uncharacteristically uncommunicative or going out of their way to tell you how much they love you.

These people will also likely have moments of guilt and buy you unexpected gifts or seem more distant when spending time with you even if you are spending more time than usual together.

If a cheater gets away with cheating, the thrill of this can become exciting. Which is why, ‘once off’ cheaters often become serial offenders.

This type of cheater is a repeat offender and will continue to cheat again and again as they love the thrill of it.

This narcissistic cheater is a seasoned pro so they can be harder to detect because they have mastered their craft.

They will go out of their way to tell you they have friends of the opposite sex and if you are going to have a problem with that it’s not point continuing as they don’t want to live the nightmare again.

After laying this base down, this cheater now has their ‘get out of jail’ card if they need to use it.

‘I felt relieved when I ended things, and now I realise I only had the affair because I felt I had “unfinished business” with him,’ she said.

Despite cheating, she is still happily married to her husband who remains none the wiser.

A recent report from Sexual Health Australia revealed affairs are common, with statistics showing 60 percent of men and 45 percent of women have strayed outside their primary relationships.

Of those who have cheated, some said they felt ignored or suffocated by their partners, while others realised they preferred multiple lovers.