How do you fit two pints into a one-pint glass without spilling a drop? It can be done — and thanks to a classic science show of the Sixties and Seventies, millions of schoolchildren knew How!

ITV bosses announced this week that How is making a comeback next year, returning to TV more than half a century after its launch in 1966.

What they didn’t confirm is whether the theme music would still be a thunder of Native American war drums, nor if the presenters would begin every show by raising the palms of their hands to the camera and solemnly chanting ‘How!’ like ‘Big Chief’ Sitting Bull.

At the time, no one saw anything amiss with this traditional ‘Red Indian’ greeting — though no doubt today’s politically correct brigade would wail about it being ‘cultural appropriation’. 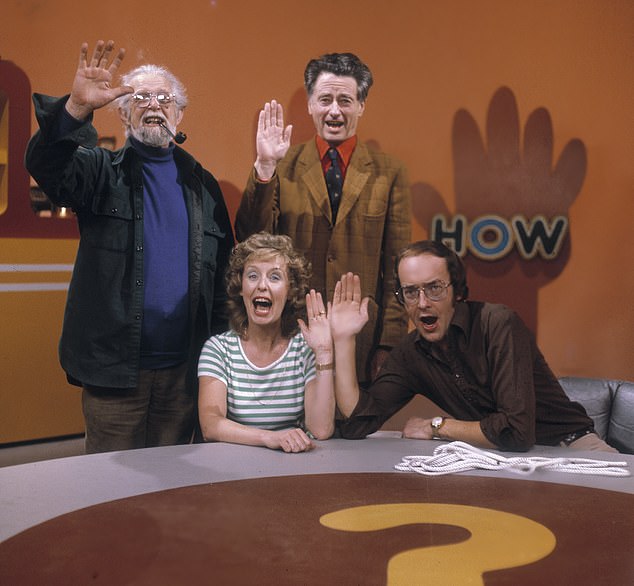 ITV bosses announced this week that How is making a comeback next year, returning to TV more than half a century after its launch in 1966 (Pictured: Jon Miller, Marian Davies, Jack Hargreaves and Fred Dinenage)

All this emphasised that science was fun, a game for children with energetic minds. Viewers were encouraged to send in questions, with a £5 prize for every one used. Many were rooted in everyday life: How do the police fight crime? How does a football team spend its week?

Others had a sci-fi flavour: How will man live in space, for instance, and how do rockets work? But the best-loved were the ones that sounded like riddles, such as that poser about the quart in a pint pot (Have you worked it out yet? The answer’s at the bottom if not.)

How do you fit two pints into a pint pot?

Stuff the glass full of sawdust first. That’s one pint. Then pour in the water.

The wood shavings will absorb it without overspilling. That’s two pints in a one-pint glass…

It’s easy when you know How!

The show, which ran in its original format until 1981, was made long before the current obsession with health-and-safety. Indeed, the 1968 Guide To Independent Television praised the way it encouraged children to try somewhat risky experiments.

‘That very popular programme How does some experiments with fire,’ it noted.

‘Children are fascinated with fire and want to find out about it. They will experiment come what may. It is far better to show children some of the things they may safely do, and warn them against things it is not safe to do, than leave them in dangerous ignorance.’

Things that were safe to do, according to the example of Jack Hargreaves, included lighting and puffing on a briar pipe.

During one demonstration, absorbed in the experiment, he absent-mindedly took his pipe from his mouth and dropped it into his pocket. A minute later, the jacket was smouldering.

All this made for unpredictable, often hilarious entertainment. If the remake is half as engaging, it will be a triumph. 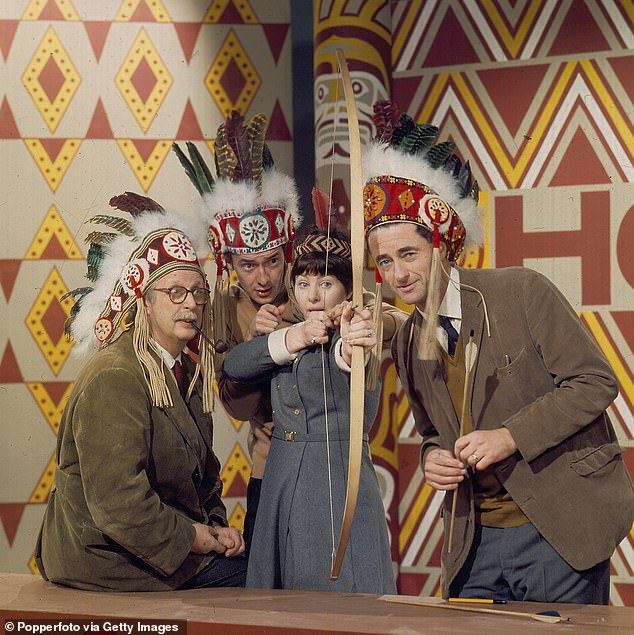 Pictured: Jack Hargreaves, Fred Dinenage, Jill Graham and Jon Miller on the set of How in 1968

The show returned during the Nineties with only Dinenage remaining from the original cast, along with a raft of new presenters including Carol Vorderman, Gail Porter, Sian Lloyd and Gail McKenna.

But it’s the classic Sixties line-up that older viewers remember most fondly:

Jack Hargreaves: A former vet’s assistant who switched to journalism and became editor of Picture Post magazine, he found national fame on a ‘country matters’ show called Out Of Town, interviewing shepherds, blacksmiths and thatchers from a studio set that looked like a potting shed.

He devised How as an educational series, and it was his easy-going avuncular style that gave the programme its character.

‘He was the greatest natural broadcaster I’ve ever worked with,’ co-star Dinenage says. ‘He needed no script, no notes, no autocue — not even any props. He was the television producer’s dream, able to talk about any subject under the sun interestingly, amusingly and gently.’

A fascination with how things worked stayed with him all his life. In his 70s, he said: ‘I still can’t resist mending things that were busted 50 or 60 years ago, and I still can’t throw anything away.’ Hargreaves died in 1994, aged 82.

Jon Miller: Served in the RAF during World War II as an aerial reconnaissance photographer and shared Hargreaves’ ability to talk fluently to camera without a teleprompter.

He was such a natural that the crew dubbed him ‘one-take Miller’. Intensely musical, his mother was a concert pianist and his cousin was the violin virtuoso Yehudi Menuhin — but his real love was causing explosions.

When he died aged 87 in 2008, his obituary noted his ‘RAF bearing’ and ‘dedicated eccentricity’.

Bunty James: Now 86, she was the sensible presence on the show… and as the only woman was expected to demonstrate anything that involved cookery, sewing, fashion or household appliances.

She was replaced towards the end of the show’s run by Marian Davies, of pop group The Ladybirds. Bunty launched a new career last year with the publication of her detective novel See You Around, about a group of amateur sleuths in a care home who help a police inspector — the son of one of the ladies — to solve a murder.

Fred Dinenage: Still a popular broadcaster and newsreader, aged 77. Producers are keen for him to join the cast of the revamped How next year. Dinenage has a second career, as a criminologist, and was the ghostwriter for the Kray twins’ autobiography, Our Story.

He met the former London ganglords when Reggie wrote to him from HMP Parkhurst, offering to organise an auction of prisoners’ paintings to raise money for a little girl who needed a kidney transplant.

The cons had seen Dinenage reporting the story on the news, and it had touched their hearts.

CAN YOU CRACK THESE CRAZY QUESTIONS?

How do you fit a hard-boiled egg into a milk bottle?

Pushing a peeled hard-boiled egg through the neck of the bottle with your hand is impossible: it will simply turn to mush. But if you set light to a piece of paper and drop it in the bottle, then place the egg covering the bottleneck, watch what happens — it gets sucked through the hole without splitting and drops into the bottle.

That’s because the burning paper consumes all the air in the bottle, creating a vacuum. As it attempts to suck more air into the bottle, pressure is exerted equally over the egg’s surface, so that it doesn’t break up while it squeezes down the bottleneck. 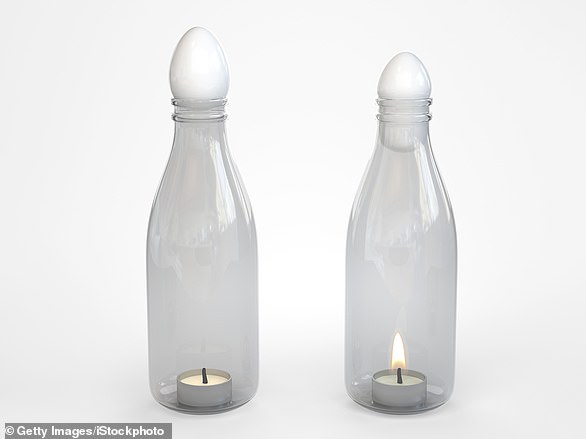 Pushing a peeled hard-boiled egg through the neck of the bottle with your hand is impossible: it will simply turn to mush (stock image)

How do non-stick saucepans stay non-stick?

The pans are coated with an almost frictionless chemical coating that repels other molecules. Water and oil simply slide off.

This plastic polymer, polytetrafluoroethylene or PTFE, was discovered by accident in 1938 by a U.S. scientist trying to develop a cheap synthetic refrigerant, to make freezers work more efficiently. It was trademarked as Teflon in 1945.

How do you get a ship in a bottle?

The hull of the boat is made separately, with holes for the masts in the deck, and slipped through the neck of the bottle. The masts with the folded sails follow, and slot into place. A cotton thread pulls the masts upright and unfurls the sails in the bottle. 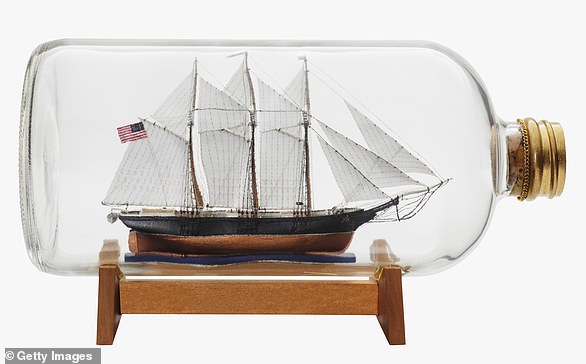 The hull of the boat is made separately, with holes for the masts in the deck, and slipped through the neck of the bottle (stock image)

How did a medieval knight in a full suit of armour get onto his horse?

Short answer: with difficulty. Longer answer: he had to be hoisted into place with a harness and pulley. By running a rope over a wheel — or better still, looping it round two wheels — the knight’s squires were able to lift much more than their own weight and haul the armoured man onto his horse.

A bigger problem came if the knight was knocked off his mount in battle. Too heavy to move, he would lie helpless on the ground at the mercy of enemy soldiers.

Terminally ill Star Wars fan WILL get to see the new...

Woman sues NHS for not telling her she had inherited Huntingdon’s...