An acclaimed interior designer who spent two decades transforming a London chapel into a stunning four-bedroom home has placed her ‘best piece of work to date’ up for sale for £3million.

Complete with its own pulpit, majestic stained-glass windows, and Latin frieze, the reincarnated chapel is God’s gift to those seeking a unique piece of architectural excellence in Camberwell, south London.

The 20-year transformation was a labour of love for Peggy Prendeville, 64, who lived on site in the chapel from 1999 as she converted the church into an enviable four bedroom, two bathroom property.

‘I lived on site whilst most of the work was taking place, I had a little spot at the top of the staircase where I would tuck myself away with a phone and a fax machine,’ she said. 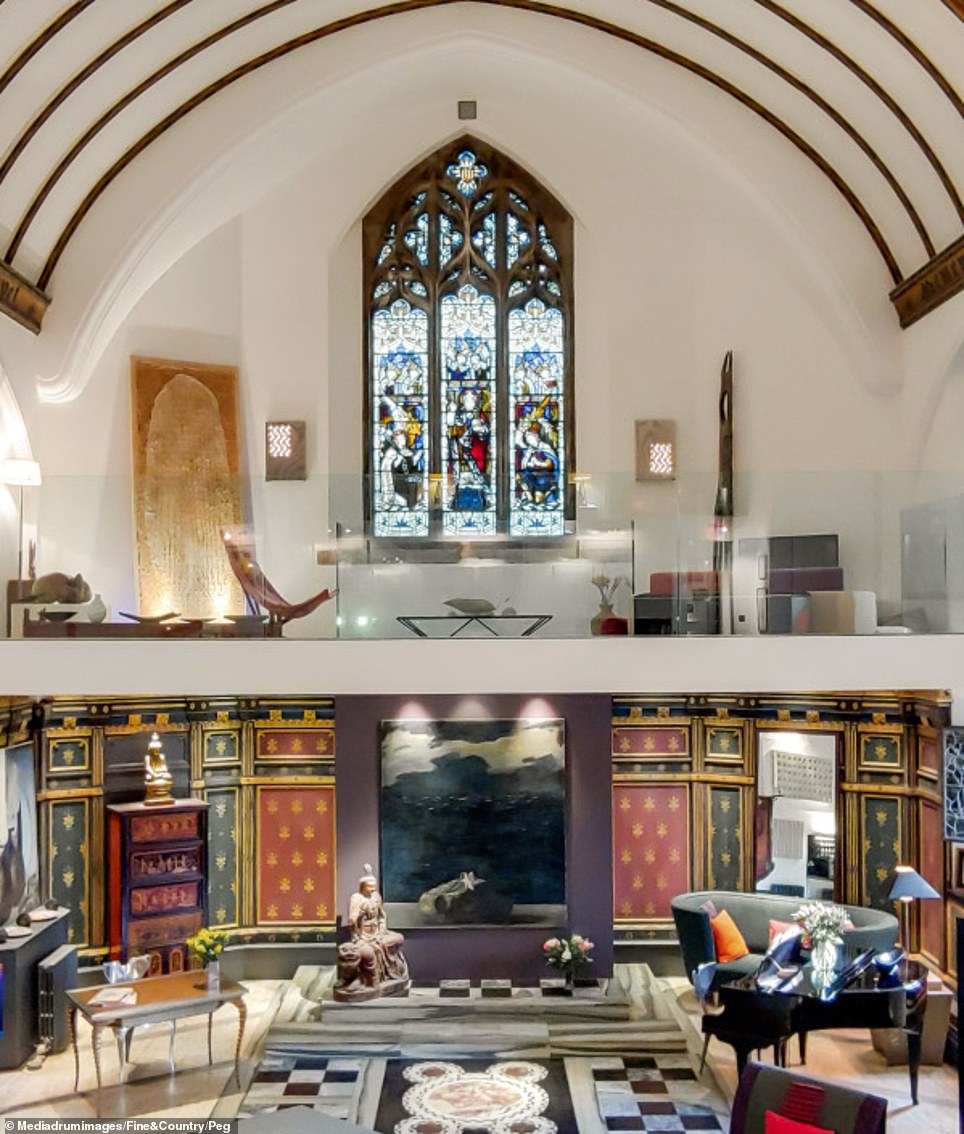 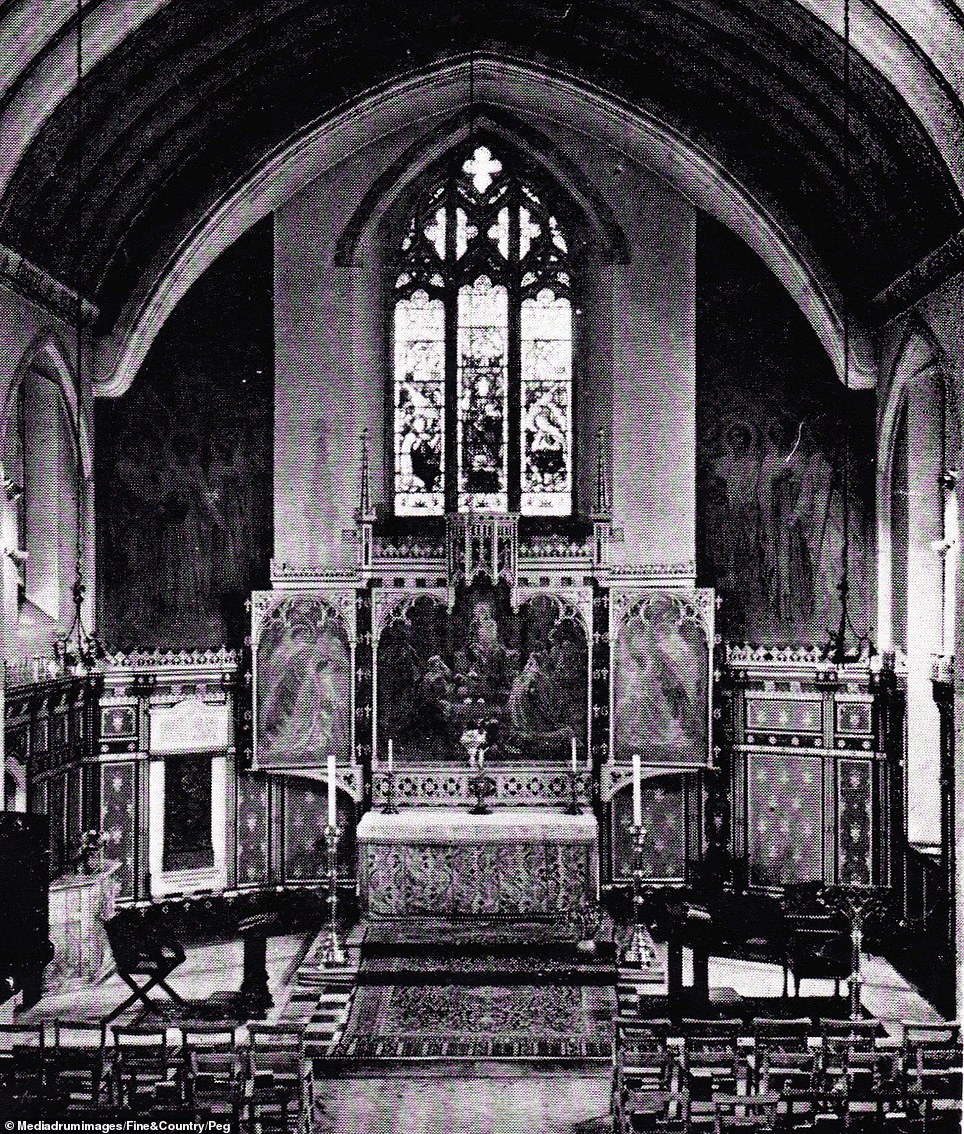 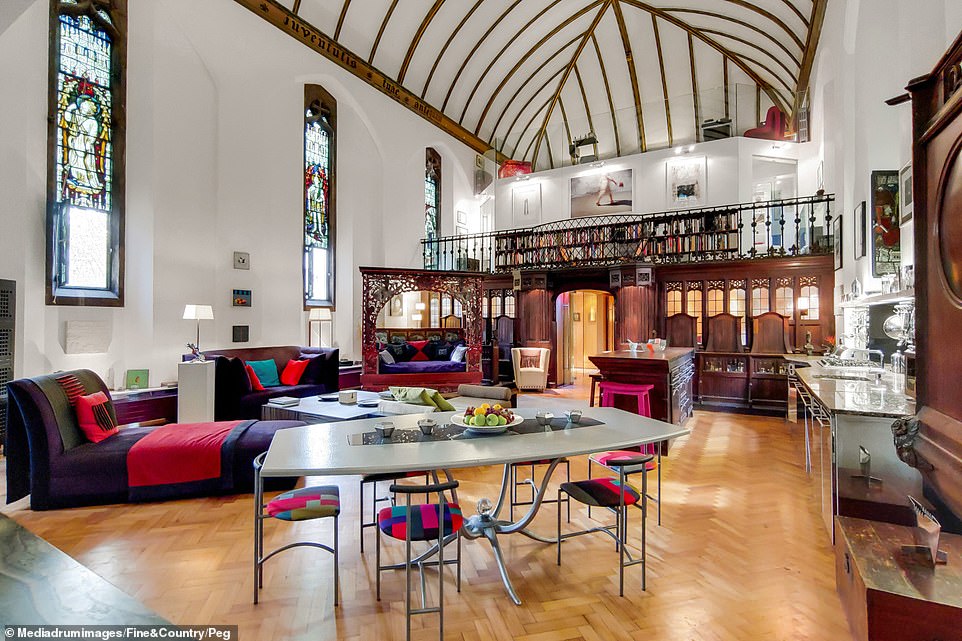 Complete with its own pulpit, majestic stained-glass windows (pictured), and Latin frieze, the reincarnated chapel is God’s gift to those seeking a unique piece of architectural excellence in Camberwell, south London

‘It meant I was always on hand if there were any problems so they could be rectified at source – being the site foreman was also the only option I could afford at the time!

‘There’s been a lot of work, careful restoration, and planning permission to get to this point but I’m very proud of my home, it seems strange to say but I’ve no doubt it’s my greatest piece of work, I don’t think I’ll ever manage anything else which is quite the same. Most people who come to visit will either say “wow” or “this is the nicest house I’ve ever been in” – that was never the intention but it is certainly nice to hear.

‘It’s a lovely home – a fun home – which has hosted countless dinner parties and even a wedding in its time. It manages to be cosy whilst still maintaining its unique historical character.’

Ms Prendeville has previously transformed a plethora of grand hotels and homes across the world, as well as a library in an 18th-century ballroom for auctioneers Sotheby’s. 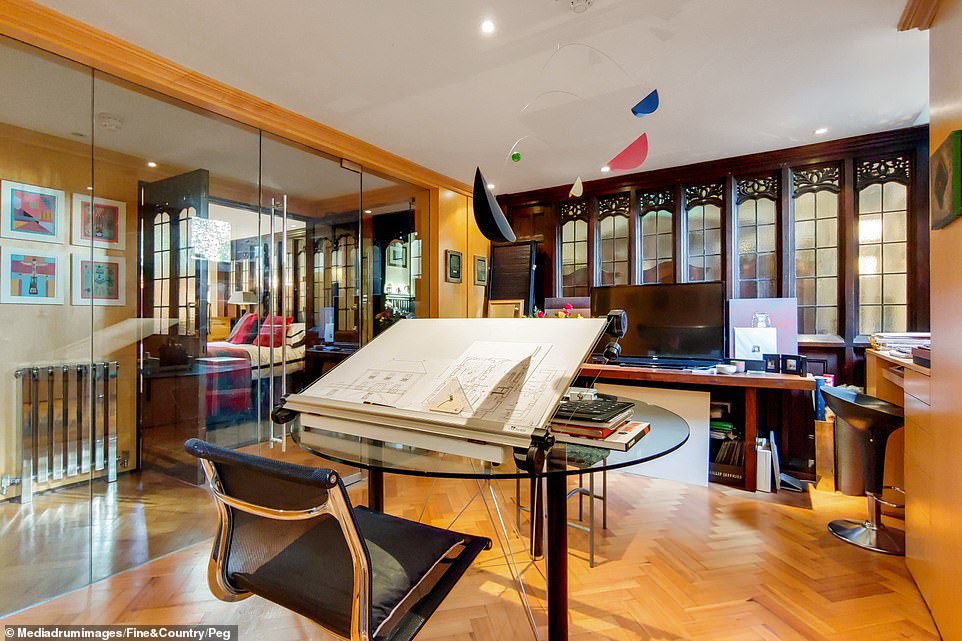 Pictured: A stylish working space inside the home, which was once a seminary for Anglican priests in Camberwell, London 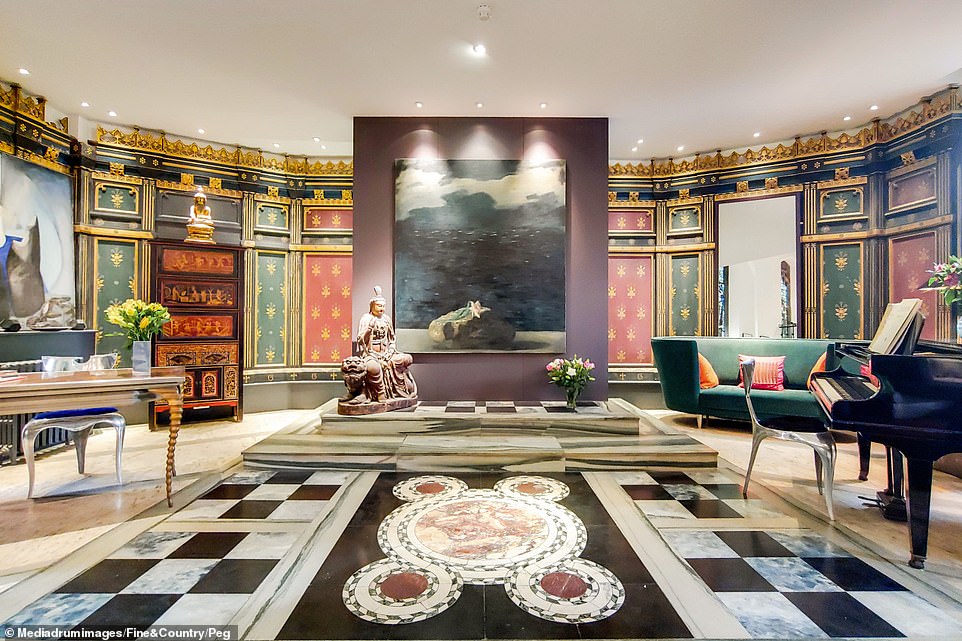 The chapel had once been part of the Goldsmiths College of Art, where many of the Young British Artists polished their skills in the 1980s (Pictured: art on display inside the property) 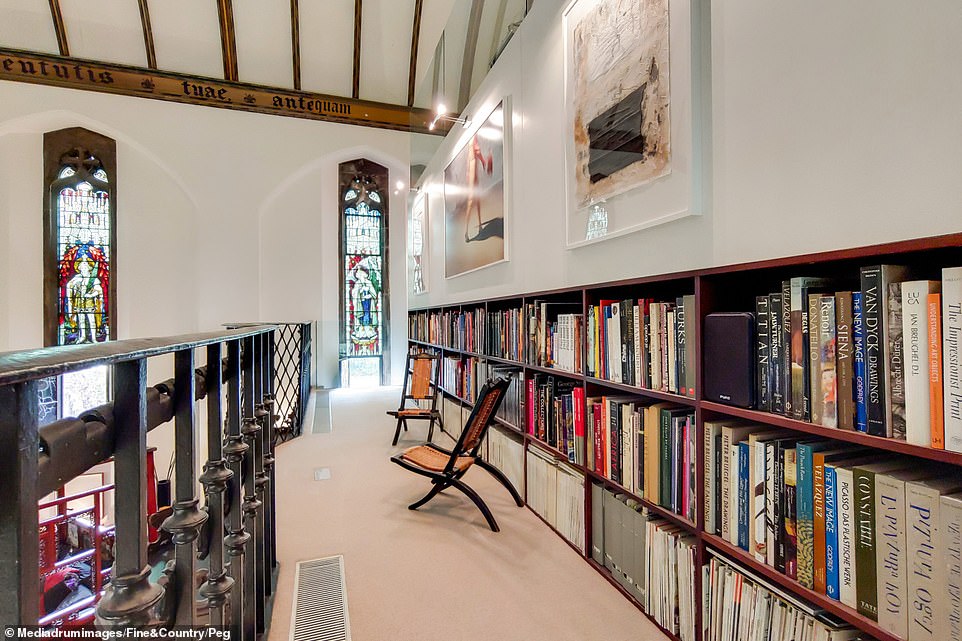 Pictured: An impressive and extensive reading platform inside the main area of the chapel seen after the renovation

She bought the London chapel from a man who had begun converting the church, but had become overwhelmed by the scale of the task.

‘I was quite lucky when I arrived in the chapel,’ she added. ‘We bought it from a man who had already began converting the church but the scale of the task had clearly gotten the better of him – he ended up leaving and abandoning a huge array of items, some of which turned out to be very useful.

‘We needed a new home as our family had grown from three to four and I didn’t just want to live in any old house or flat. It was a throwaway comment when I told the estate agent to look for a church but he came back with one almost immediately – two actually.’

Ms Prendeville worked closely with English Heritage and the local planning office to make sure both were happy with the work she was undertaking on the chapel. 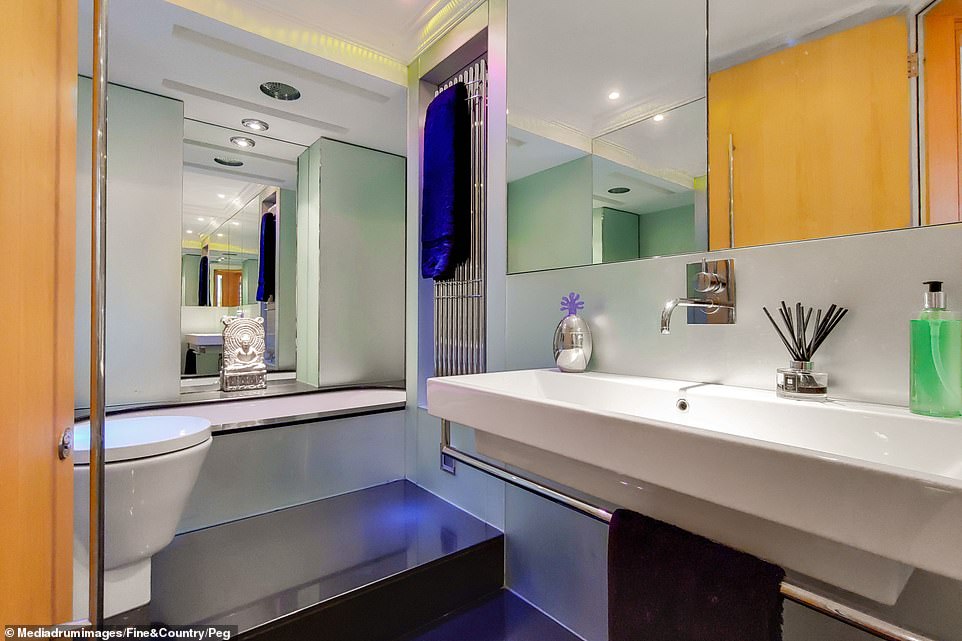 The house, in Camberwell, south London, boasts two modern bathrooms and four bedrooms, which can easily be converted to five 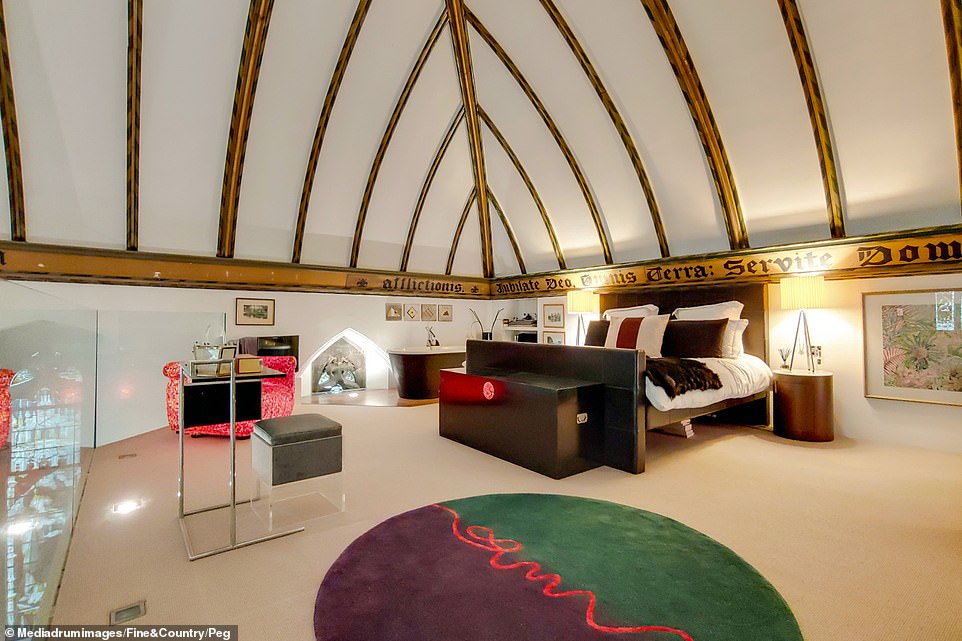 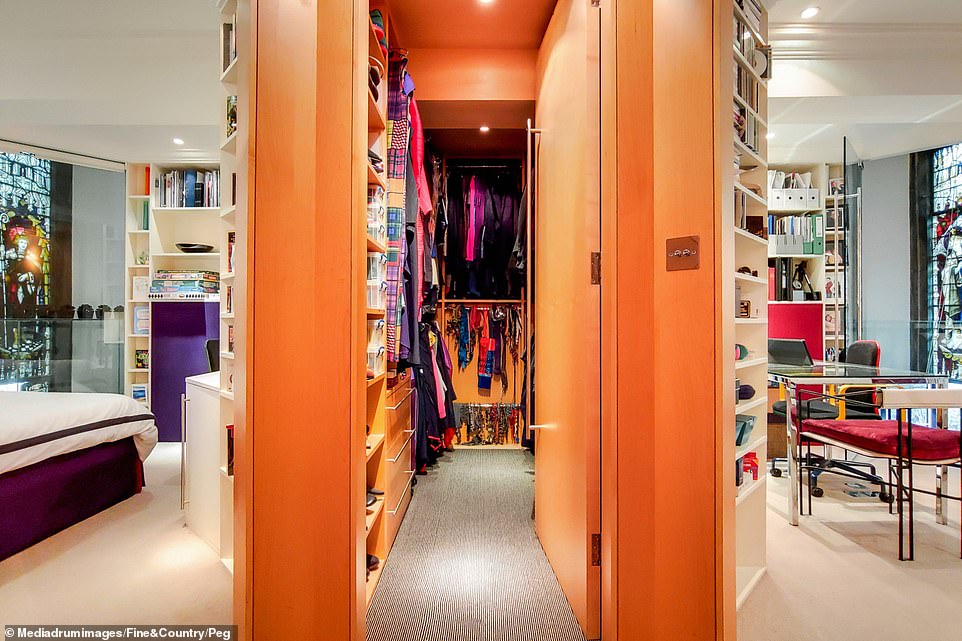 The house, in which the interior designer lived from 1999, is filled with multiple useful storage spaces hidden across the home 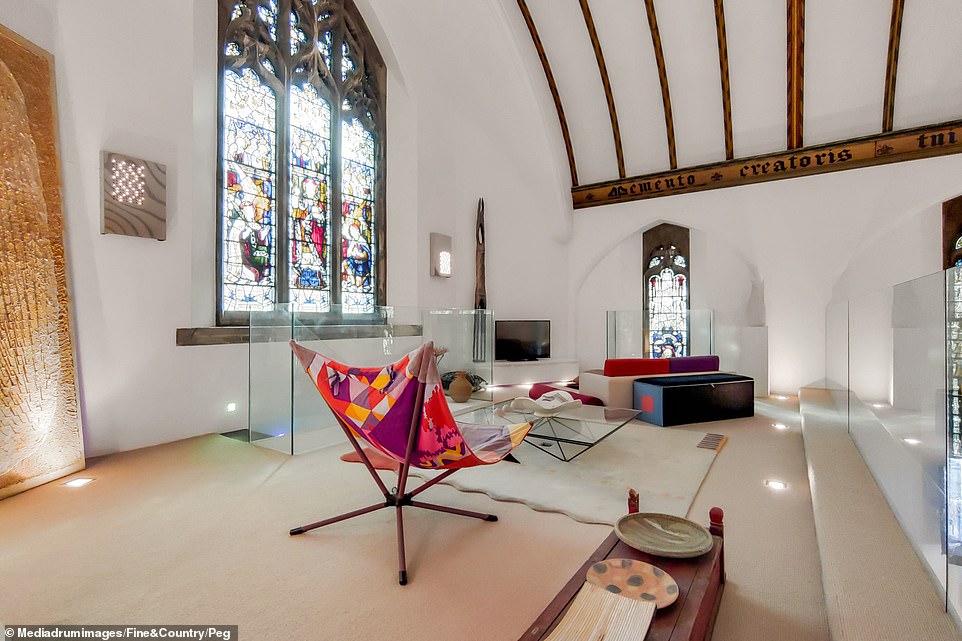 Ms Prendeville worked closely with English Heritage and the local planning office to make sure both were happy with the work she was undertaking on the chapel (Pictured: a living area)

The church, in Camberwell, was originally created as the chapel for a women’s teacher training college. It was later used as a seminary for Anglican priests and eventually became part of Goldsmiths College of Art, where many of the Young British Artists polished their skills in the 1980s.

‘I wanted to keep the glorious stained-glass window as a focal point as well as the Latin frieze. I love working with glass so I was able to keep the sense of space and make sure that all the interesting architectural details were still visible.

‘It was important not lose the sense of calm that this building with its beautiful proportions and stained-glass windows had.’ 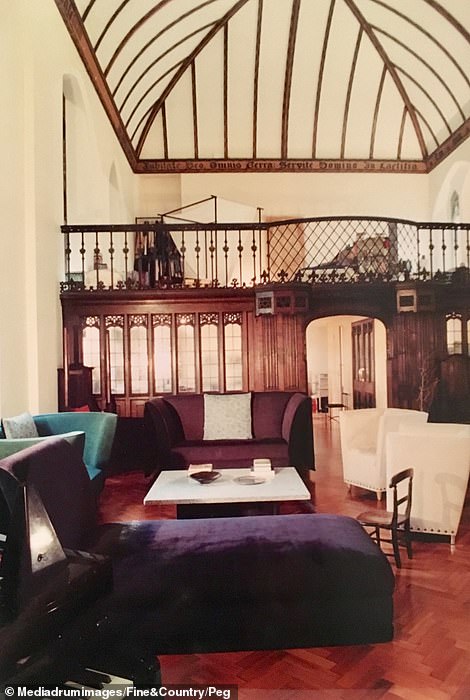 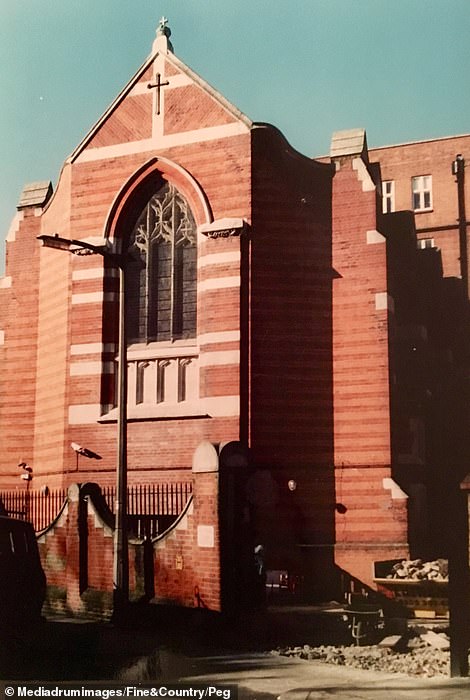 The church, in Camberwell, was originally created as the chapel for a women’s teacher training college (left, the chapel seen mid-conversion and right, the property’s exterior) 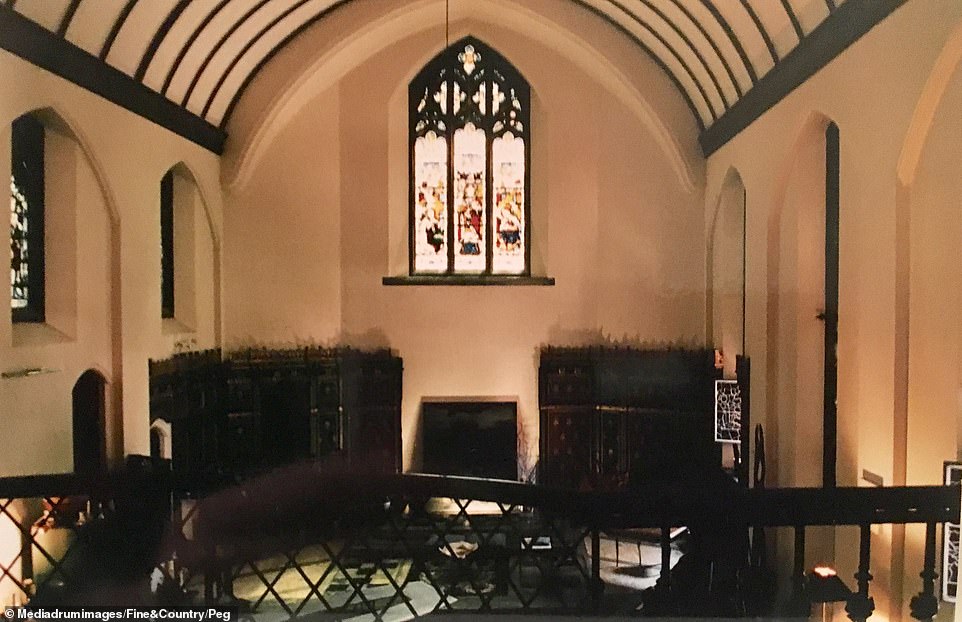 Pictured: The now four-bedroom, two-bedroom home ahead of the completion of Ms Prendeville’s impressive overhaul

But after 20 years, the interior designer and her partner Peter Gilmour have decided they want a new challenge.

‘On my last day here, it will be a wrench to leave,’ she said. ‘I love it here, it’s a wonderful place to live and raise a family. I’ll miss having a pulpit too, it was very useful for speeches at birthday parties!’

’20 years and lots of big ideas later, it’s a splendid home which I hope will continue to give joy for years to come.’

The Chapel, located in Camberwell, south London, is on the market with luxury estate agents Fine & Country with offers over £3,000,000 being accepted.

‘The Chapel is a truly extraordinary home, one of a kind, just like the owner Peggy,’ said Fine & Country representative Alexander Forde.

‘Love, eccentricity and flare have been poured into making this home a truly spectacular place to live.’ 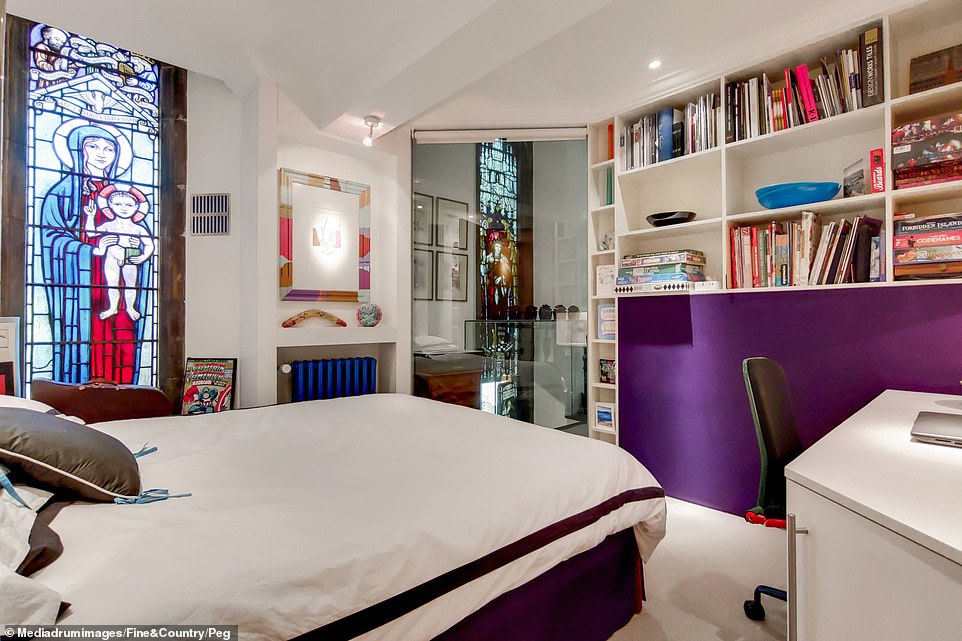 Another bedroom features a beautiful stained glass window looking over the bed, with a large built-in bookshelf on the right 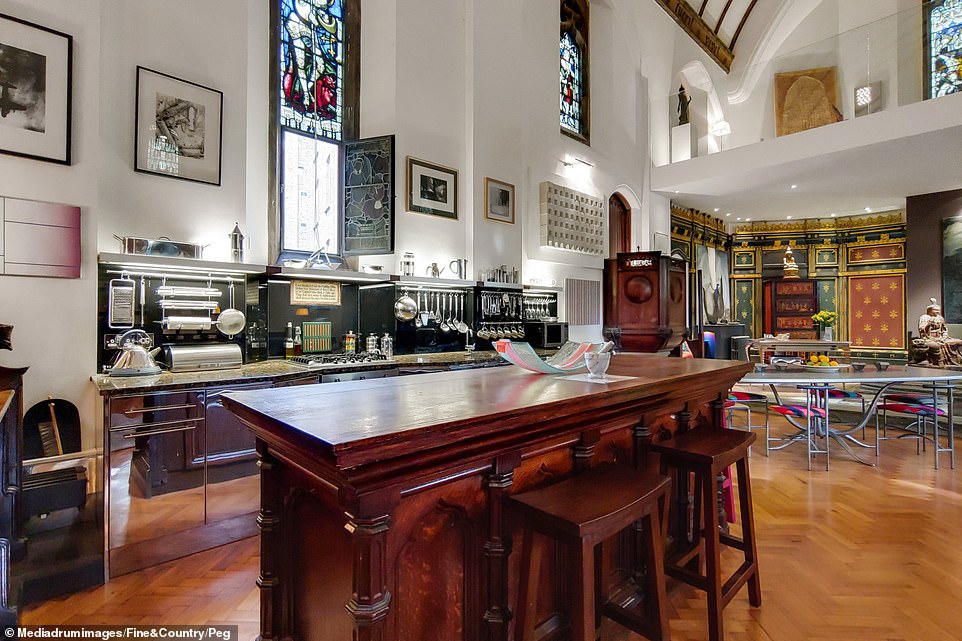 The Chapel, located in Camberwell, south London, is on the market with luxury estate agents Fine & Country with offers over £3,000,000 being accepted (Pictured: the property’s stylish kitchen area)

Fury at Corbyn on anniversary of IRA’s Birmingham bombings