The furious Question Time audience member who savaged Jeremy Corbyn’s plan to ‘super-tax’ hard-working Britons has been revealed as a champion biker.

The IT consultant and high-profile motorcycle racer from Bury, Lancashire, launched a blistering attack on Labour’s tax plans to thumping applause – but also left some viewers scratching their heads after seeming to get his numbers in a muddle.

Among a slew of punishing tax rises, Labour yesterday unveiled a jump to the 45p rate for those earning over £80,000, which the Mr Barber said included him.

In an explosive rant in Bolton last night, the time-trialist said: ‘I’d like to call out Labour as liars.

‘I am one of those people that he will tax more, and I’m nowhere near in the top 5 per cent, so I’m calling you a liar.’

According to a profile of the time trial biker, Mr Barber fell in love with motorcyles aged five – a passion he developed from mechanic father Phil.

Through the 1990s, he cemented himself as a force in the biking world and participated in competitions around the globe.

But his day job is an IT consultant, according to the Mirror, in which he claims to earn over £80,000 – an income he said does not put him in the top 5 per cent of earners.

But Mr Burgeon hit back: ‘I’m afraid on that you’re mistaken, we are not going to raise income tax for anybody apart from those in the top 5 per cent of earners.’

Mr Barber claimed he earns £80,000, will be subject to Labour’s proposed tax hike, but is not in the top 5 per cent of earners.

ONS figures say that anyone earning over £75,300 is in the top 5 per cent of earners, meaning his claim is incorrect.

But Mr Barber was right to point out that many of the ultra-wealthy do not pay income tax because they do not earn a salary.

What followed was some confusion, with the Mr Barber claiming he was not in the top 5 per cent, despite maintaining he earned over £80,000.

Mr Burgon then said: ‘So we’re not going to increase your income tax then.’

Yet the motorcyclist was adamant, saying that because he earns over the £80,000 he will be subject to the 45p rate under a Labour government.

But he continued to insist that he does not fall in the top 5 per cent of earners bracket.

Murmurs from audience suggested that the animated audience member was wrong, and host Fiona Bruce said: ‘I think that is in the top 5 per cent?’

Convinced he was right, Mr Barber continued: ‘Every doctor, every accountant, every solicitor earns more than that, that’s not 5 per cent!’

Mr Burgon, a former lawyer, challenged the claim that every solicitor earns above £80,000 and prompted groans from the audience when he said he only earned £40,000 when he was practicing. 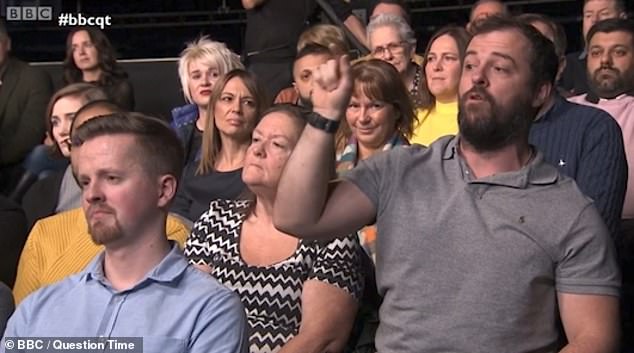 The man accused Richard Burgeon’s party of railing against billionaires and the uber-wealthy, but actually pledging policies which would rinse the pockets of ordinary employees 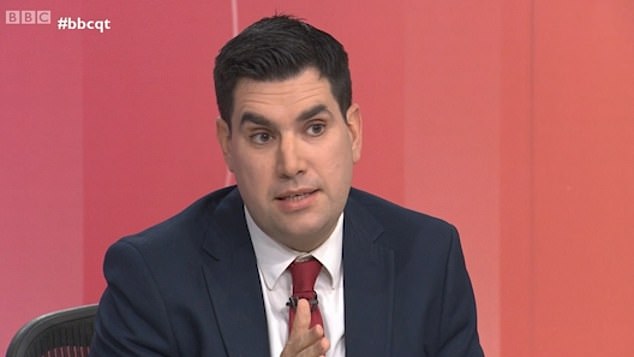 It seems that Mr Barber had confused income with wealth, as he pointed to rich people who do not earn a salary but live off other means such as property, inheritance, pensions and dividends.

According to the most recent figures from the Office for National Statistics, an income of £75,300 places an earner in the top 5 per cent.

The Institute for Fiscal Studies says Mr Corbyn’s super-tax would affect up to 1.9million people and could even cost the Treasury £1billion a year if high earners cut their pre-tax income.

Labour has vowed to come down on the richest in society to foot their massive public services spending splurge, but IFS director Paul Johnson rubbished the claim.

He said: ‘There is no country that raises this kind of tax and does it just on companies and the rich.

Labour’s tax plans in full: Massive hikes on the wealthy and big business

Labour is proposing sweeping changes to the UK’s tax system in order to fund its massive day-to-day spending plans.

Here is a breakdown of the party’s own calculations setting out how much money each change would generate.

Inheritance tax: The manifesto does not spell out exactly what that means, but the threshold for couples paying 40 per cent death duties was raised from £660,000 to £1million in 2015. Prior to the coalition government it was £325,000.

It means those who own property – particularly in the South East – are almost certain to be caught by the duty.

Corporation Tax: Reverse cuts to corporation tax to make small profits rate 21 per cent and the main rate 26 per cent. The main rate is currently 19 per cent. Amount raised: £23.7bn

Taxing the wealthy: Labour said it would tax income from wealth more ‘equitably and efficiently’. It has pledged to tax capital gains at the same rates as income tax. Currently if you are a higher or additional rate taxpayer you pay 28 per cent on gains from the sale of residential property. Under Labour that would increase to at least 40 per cent. It would apply the same principle to taxing dividends. Amount raised: £14bn

Tackling tax avoidance: Labour has pledged to launch the ‘biggest ever crackdown on tax avoidance and evasion’ through the introduction of a Fair Tax Programme. Amount raised: £6.2bn

The Duke of Hazard: The photos that show Prince Andrew has...