Whether you had a gold medal hanging from your neck, were just learning how to stand on a snowboard, or were one of those flustered skiers wondering where all the kids in the baggy pants were coming from, you knew the name ‘Burton.’

Jake Burton Carpenter, the man who changed the game on the mountain by fulfilling a grand vision of what a snowboard could be, died Wednesday night at his Stowe, Vermont, home of complications stemming from a relapse of testicular cancer. He was 65.

In an email sent to the staff at Burton, CEO John Lacy called Burton ‘our founder, the soul of snowboarding, the one who gave us the sport we love so much.’

Carpenter was not the inventor of the snowboard, but 12 years after Sherman Poppen tied together a pair of skis with a rope to create what was then called a ‘Snurfer,’ the 23-year-old entrepreneur, then known only as Jake Burton, quit his job in Manhattan, moved back to Vermont and went about dreaming of how far a snowboard might take him. 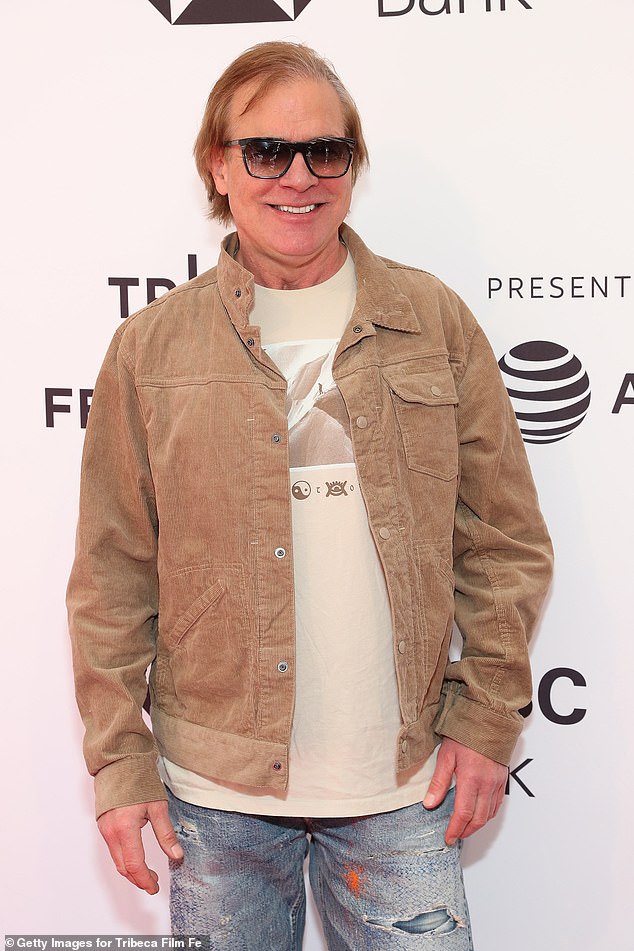 Jake Burton Carpenter died on Wednesday after a relapse of testicular cancer. He was 65. Carpenter is seen above in New York City last year 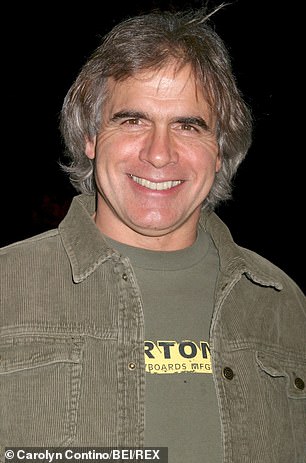 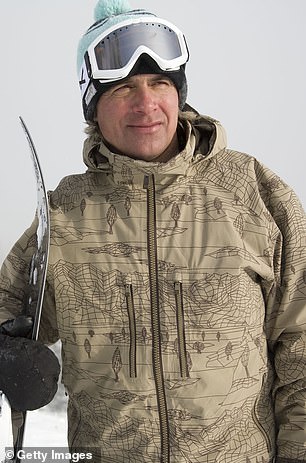 Carpenter is credited with turning what was a niche, extreme sport into a mainstream event that generates $1billion annually 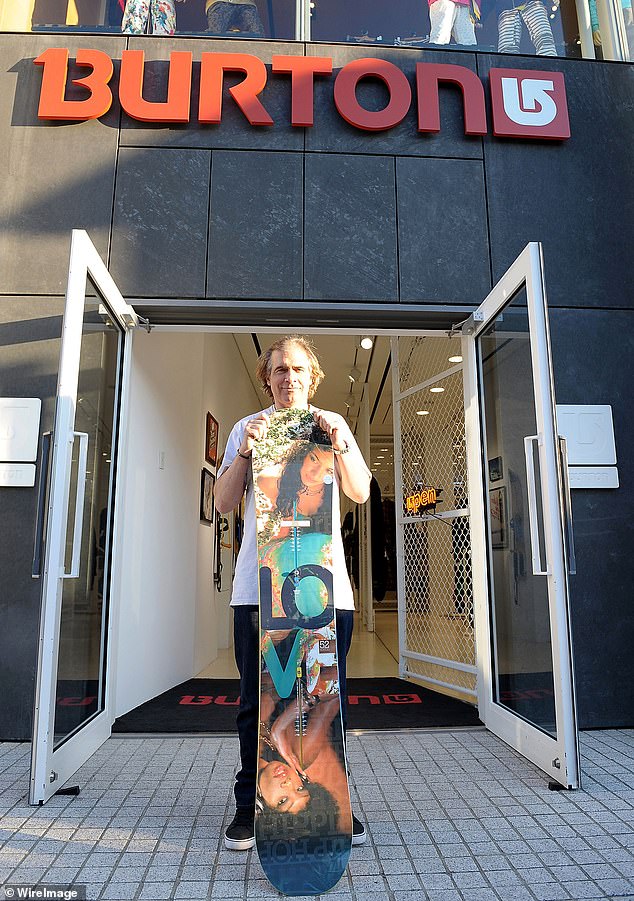 He was the founder of Burton Snowboards, an apparel company whose innovative designs captured the imagination of snowboarders worldwide. Carpenter is seen above at a Burton Snowboards flagship store in Tokyo in January 2010 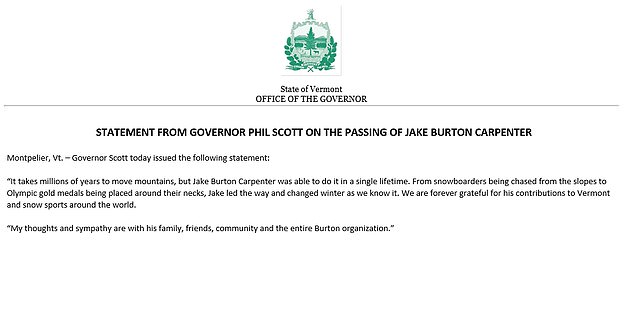 Vermont Governor Phil Scott paid homage to Carpenter, saying: ‘Jake led the way and changed winter as we know it’

‘I had a vision there was a sport there, that it was more than just a sledding thing, which is all it was then,’ Burton said in a 2010 interview with The Associated Press.

For years, Burton’s snowboards were largely snubbed at resorts – its dimensions too untested, its riders too unrefined, its danger all too real – and many wouldn’t allow them to share the slopes with the cultured ski elite in Colorado or California or, heaven forbid, the Swiss Alps.

But those riders were a force of nature.

And for all their risk-taking, rule-breaking, sidewinding trips down the mountain, they spent money, too.

Throughout the last decade, snowboarders have accounted for more than 25 percent of visitors to mountain resorts in the United States.

They have bankrolled a business worth more than $1billion annually – a big chunk of which is spent on Burton gear.

‘People take it for granted now,’ said Pat Bridges, a longtime writer for Snowboarding Magazine, who has followed the industry for decades.

‘They don´t even realize that the name “Burton” isn’t a company. It’s a person.

‘Obviously, it’s the biggest brand in snowboarding. The man himself is even bigger.’ 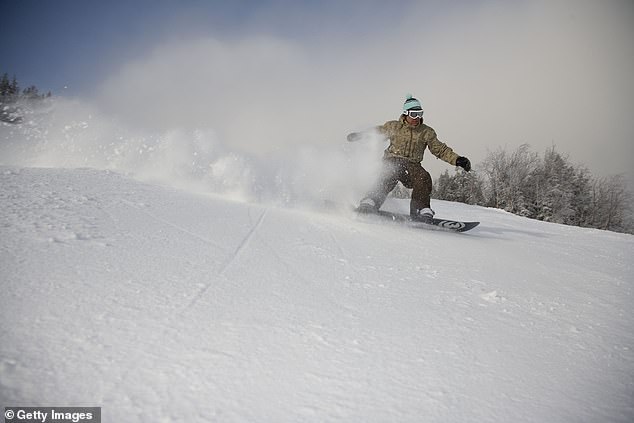 Carpenter is seen above snowboarding in Stowe, Vermont, in January 2007

In 1998, and with Carpenter’s tacit blessing, the Olympics got in on the act, in hopes of injecting some youth into an older-skewing program filled with ski jumpers, bobsledders, figure skaters and hockey players.

As the years passed, Carpenter straddled the delicate line between the ‘lifestyle sport’ he’d helped create – one that professed to value fun over winning, losing, money or Olympic medals – and the mass-marketing behemoth snowboarding was fast becoming.

‘He saw himself as a steward to snowboarding,’ Bridges said. ‘I’m not saying he was infallible, or that he always made the right choices. But at least that was always part of his calculus: “What impact is this decision going to have on snowboarding?”‘

Though Burton is a private company that does not release financials, its annual sales were north of $500million as of 2015.

In addition to the hundreds of retail stores that sell the company’s merchandise, Burton has 30 flagship shops in America and 11 more spread across Europe and Asia – a burgeoning market that Carpenter started developing a decade ago, during a time when the IOC was beginning the process of awarding three straight Winter Games to the continent. 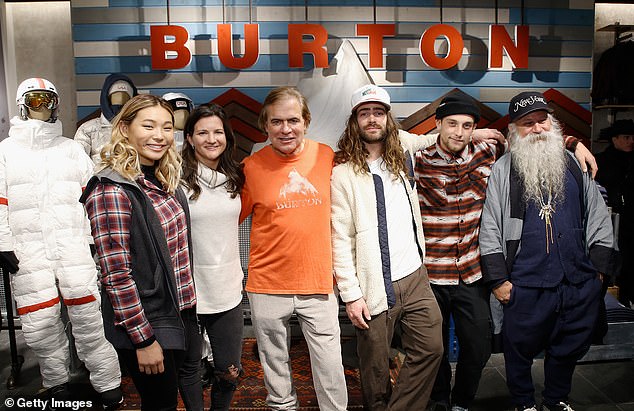 Burton Snowboards is a company whose annual sales are believed to exceed $500million. He is seen above with snowboarders, from left to right: Chloe Kim, Kelly Clark, Danny Davis, and Ben Ferguson. Burton is seen center and head designer Greg Dacyshyn is seen far right in 2017

At a bar in Pyeongchang, South Korea, not far from where snowboarding celebrated its 20th anniversary at the Olympics last year, there was a wall filled with Burton pictures and memorabilia – as sure a sign as any of the global reach of a company that remains headquartered not far from where it was founded in Carpenter´s garage, in Londonderry, Vermont.

Vermont Governor Phil Scott paid homage to Carpenter, saying: ‘Jake led the way and changed winter as we know it.’

For all his financial success, folks were always more likely to run into Carpenter wearing a snowsuit than a sportscoat.

He was a fan of early morning backcountry rides, and he had to stay in good shape to keep up with some of the company he rode with.

Burton sponsored pretty much every big name in the business at one time or another – from Seth Wescott to Shaun White, from Kelly Clark to Chloe Kim.

Indeed, it is virtually impossible to avoid the name ‘Burton’ once the snow starts falling at any given mountain around the world these days.

The name is plastered on the bottoms of snowboards, embroidered on jackets, stenciled into bindings and omnipresent in the shops around the villages. 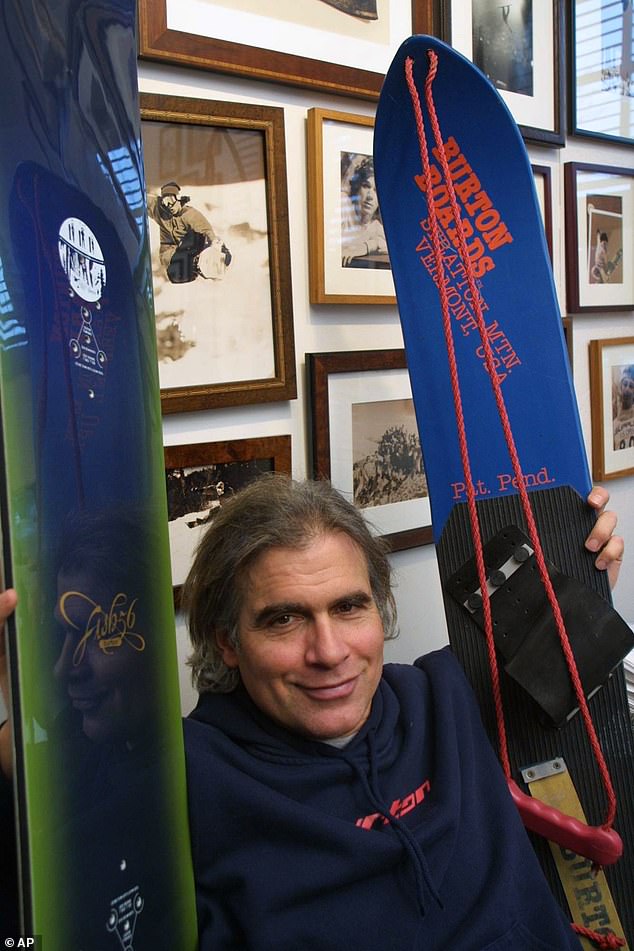 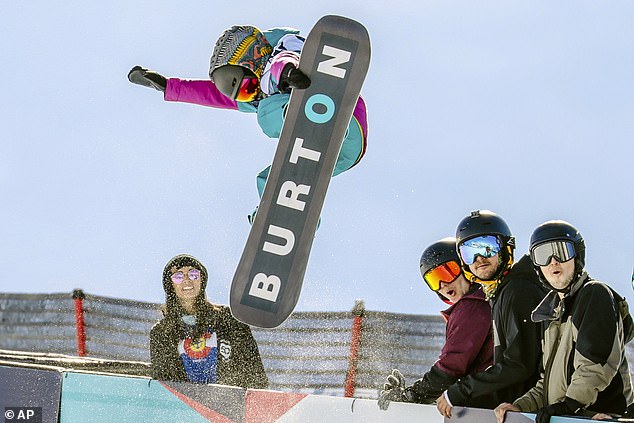 Burton’s name is often plastered on apparel during large-scale snowboarding events. The image above shows Japanese snowboarder Haku Shimaski, 9, in action at the Burton US Open Snowboarding  Championships in Vail, Colorado, in February

The Burton US Open, held each winter in Vail on a rider-friendly halfpipe traditionally recognized as the best on the circuit, remains a signature event on the snowboarding calendar.

‘I had no clue whatsoever that you’d be building parks and halfpipes and that kind of thing,’ Burton said in his 2010 interview, when asked about the reach his modest little snowboard had had over the decades.

‘We’re doing something that’s going to last here. It’s not like just hitting the lottery one day.’

His final years were not the easiest.

Not long after being given a clean bill of health following his 2011 cancer diagnosis, Carpenter was diagnosed with a rare autoimmune disease, Miller Fisher Syndrome, that left him completely paralyzed for a short time.

After a long rehab, he was back on the mountain, and in 2018, he was standing near the finish line to watch White win his third Olympic gold medal.

This month, Carpenter sent an email to his staff: ‘You will not believe this, but my cancer has come back,’ he said, while outlining his intention to fight the good fight.

Not two weeks later, Lacy sent out another email, notifying employees that Jake had died peacefully.

The email included one, simple directive.

‘I’d encourage everyone to do what Jake would be doing tomorrow, and that´s riding,’ Lacy wrote.

‘It’s opening day at Stowe, so consider taking some turns together, in celebration of Jake.’

How Meghan wears a £60 Zodiac necklace to celebrate Prince Harry...

First picture of light aircraft missing off Anglesey as hunt for...