Teachers have been forced to become ‘bouncers’ in a battle to stop pupils eating unhealthy takeaway food on their way home from school.

Children have been told they can’t go into at least three convenience stores and a takeaway after home time between 2.45pm and 3.15pm.

Staff have been patrolling the parade of stores and standing in high vis jackets outside a chip shop.

Cotham School says it is using powers given to schools by Michael Gove in 2011 which allows it to rule over over the conduct of pupils in certain circumstances outside the school gates. 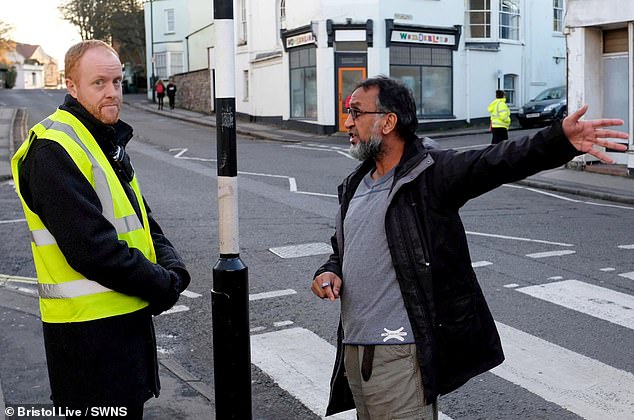 Pictured: Bobby Sehdev of Monikas shop remonstrates with one of the teachers patrolling the streets of Bristol after children have finished their school day 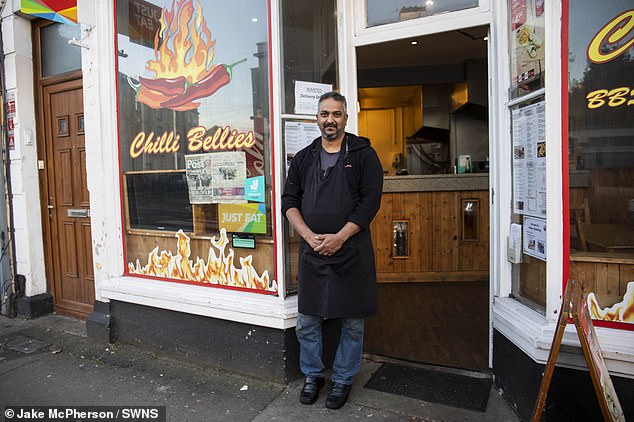 Neil D’Souza, owner of Chilli Bellies in Bristol, is among those angry at the teachers currently patrolling streets after school time

Business manager Allison Crossland added that teachers have the authority over what the pupils do, even after the end of the school day.

She said the school was using powers given to schools in Michael Gove’s 2011 Education Act, which gives the authority over the conduct of pupils in certain circumstances outside the school gates and after the end of the school day.

She said: ‘We supervise the parade of shops there and all the way from the school to the bottom of Nine Tree Hill, it isn’t just these shops.

‘It is only for half an hour from 2.45pm to 3.15pm, and it is done to ensure the safety of children on their way home from school.

‘We have 1,600 pupils, and 400 of them come out of school and come this way and head towards Stokes Croft and on into St Paul’s.’

But one takeaway owner says he called the police – claiming teachers went inside and started giving out detentions to children and booting them out.

Shopkeepers say their profits have plummeted with one claiming he’s now forced to stay open seven days a week to make up for the shortfall.

The school denies staff have entered the shops but have admitted staff ‘supervise the parade of shops’. 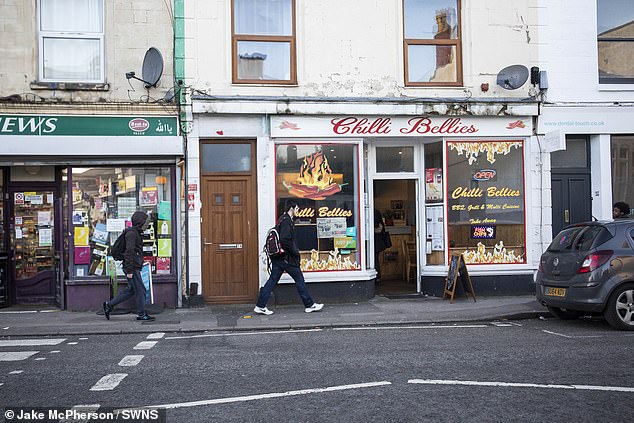 Neil D’Souza, owner of takeaway Chilli Bellies, says he has seen a massive drop in business since staff from Cotham School started patrolling the streets.

Police were even called by Mr D’Souza last week when staff allegedly blocked the entrance to his shop and stepped in to boot pupils out.

Mr D’Souza said: ‘They came in the shop and started telling off the children who were in there, handing out detentions, demanding that they leave.

‘I’d taken the children’s money, their food was almost ready. I said I’d had enough and asked this teacher to leave, to get out of my business, get off my property. 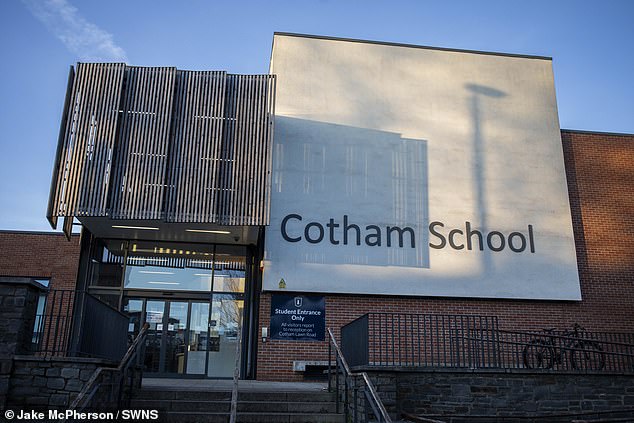 ‘He argued with me, and then went and stood right on the doorstep. He was physically blocking the entrance.

‘They were intimidating the students, and this was intimidating to my normal customers too. He refused to move, that’s why I called the police.’

She said: ‘You’ve got two senior teachers in high-vis jackets standing outside a shop like bouncers.

‘This is after school, with the kids on their way home. Young people have a hard enough time as it is. This is ridiculous.’

Bobby Sehdev, the proprietor of Monika’s convenience store which is on the same street, also berated the teachers for their policy of stopping students going into his shop.

Jabir Shar, the owner of a nearby newsagents Tuck News, also complained his business was being affected by the clampdown.

He claims the ban on schoolchildren entering the shop could force him to consider closing if the leaders do not change their policy.

The shop owner says he is losing hundreds of pounds every day as a result of the school’s rule.

He said: ‘They are misleading the children and parents. I have had parents come in and ask why their children are not allowed in here, they have been told we don’t want them in.

‘We are a business and would like to carry on serving them. This has been going on for more than 20 days and I’m losing hundreds of pounds a day.

‘If this continues I’m not sure I’ll be able to remain open. They have a teacher standing outside which makes our other customers suspicious about what’s going on.’

Neil D’Souza, owner of Chilli Bellies, has been forced to work a seven-day week to make up for lost trade.

‘I lose around £30 a day,’ said Mr Dsouza. ‘I am a small business so that is quite a lot. I used to close on Mondays but now I have to remain open.

‘I’ve worked hard to build up my business. I’m not sure what will happen if they continue with it. It’s quite frustrating, I’ve done nothing wrong and the kids really like the food.’

Cotham School’s leaders are adamant the reason for the ban and strict enforcement is for the safety and dispersal of the students. But Mr D’Souza claims he was told different reasons previously.

He said: ‘When this came in earlier this year, we were told about it, and I went to see the headteacher at the school.

‘I sat and listened, and she gave me a lecture about how what I was serving people was unhealthy food. To me, it was all about her idea of unhealthy food.

‘I feel it’s more of a discriminatory thing, to me, and that’s inexcusable for me. This is affecting me badly, and I’m very upset about it.

‘I used to open at 3pm, and then when they brought this in, I started opening later.

‘But then I thought why should I? So I went back to opening at 3pm again.

‘The worst thing for me is that the teachers are standing there in front of me and telling the children that they should go down to Co-op on St Michael’s Hill or to the chip shops on Stokes Croft. They say that in front of me. Why should they be allowed to do this?’

A spokesperson for Avon and Somerset police confirmed they were called to reports of antisocial behaviour.

They said: ‘Police were called just after 3.10pm on Thursday, November 28, by the owner of a takeaway reporting antisocial behaviour at the entrance to his premises in Cotham Road South, which he said was preventing customers from entering.

‘Officers attended and spoke to the parties involved. No offences were identified or disclosed.’

IVF increases a baby’s risk of genetic changes 11-FOLD – and...