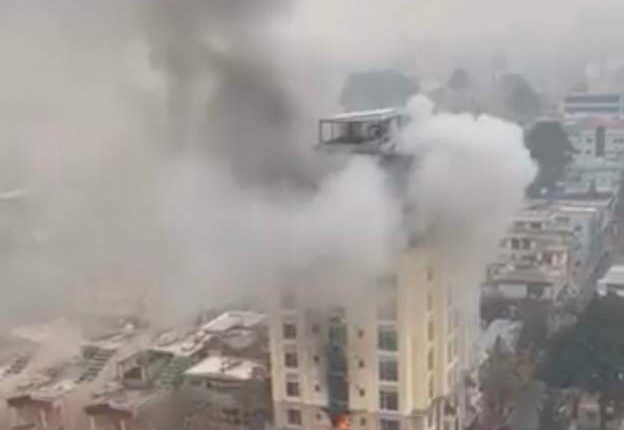 At least three attackers have been killed by Afghanistan’s security forces after they opened fire at a Kabul hotel popular with Chinese nationals, according to a spokesman for the ruling Taliban.

The attack has now ended and no foreigners were killed, although two of them were injured while trying escape the attack by jumping from the hotel balcony, Taliban spokesman Zabihullah Mujahid said.

Kabul’s Emergency Hospital, run by an Italian non-profit near the attacked hotel in the Shahr-e-Naw area, reported receiving 21 casualties – 18 injured and three dead on arrival.

Later on Monday, ISIL (ISIS) claimed responsibility for the attack on its Telegram channel.

The group said two of its personnel “attacked a big hotel frequented by Chinese diplomats and businessmen in Kabul, where they detonated two explosive devices hidden inside two bags,” one of them targeting a party for Chinese guests and the other targeting the reception hall.

While the firing was continuing inside the hotel, a fire broke out on one of its floors, sources told the Reuters news agency.

A video posted on Twitter by a journalist in Kabul, verified by Reuters, showed smoke billowing out of the building.

Residents of the area said the attack was carried out at a building where Chinese and other foreigners usually stay. The shooting continued after they heard a powerful explosion, they said.
The attack came a day after China’s ambassador met the Afghan deputy foreign minister to discuss security-related matters and sought more attention on the security of its embassy.
China’s state-run Xinhua news agency reported that the attack took place near a Chinese guesthouse and that its embassy in Kabul was closely monitoring the situation.

China, which shares a rugged 76-km (47-mile) border with Afghanistan, has not officially recognised the Taliban government but is one of the few countries to maintain a diplomatic presence there. The Prime Minister of New Zealand resigned and then cried