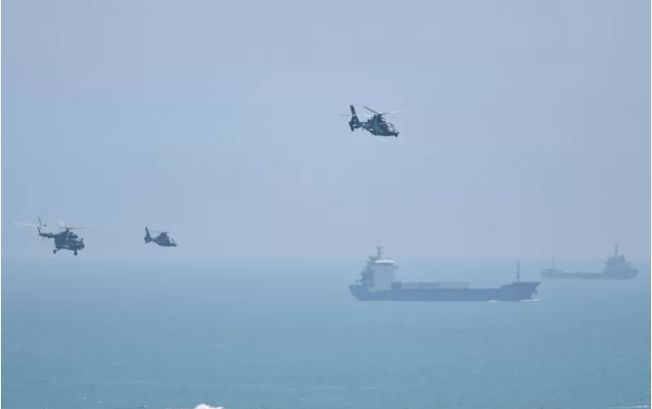 The Chinese military has sent 71 planes and seven ships towards Taiwan, according to the Taiwanese defence ministry, marking the biggest daily incursion yet as Beijing protested against “collusion and provocation” by the self-ruled island and the United States.

In a statement on Monday, the Taiwanese defence ministry said 47 of the Chinese planes crossed the median line of the Taiwan strait, an unofficial boundary once tacitly accepted by both sides, during the 24-hour display of force.
Among the Chinese planes were 18 J-16 fighter jets, 11 J-1 fighters, six Su-30 fighters, and drones.

The defence ministry said it monitored the Chinese moves through its land-based missile systems, as well as on its own navy vessels.
China, which claims Taiwan as its territory, said on Sunday that it had conducted “joint combat readiness patrols and joint firepower strike drills” in the sea and airspace around the self-ruled island.

The People’s Liberation Army said the drills were a “firm response to the current US-Taiwan escalation and provocation”.

It did not specify the nature of the alleged provocations, but Beijing has been angered by Taiwan-related provisions in a recently approved US defence spending bill.
The $858bn legislation, which US President Joe Biden signed on Friday, authorises increased security cooperation with Taiwan and requires expanded cooperation with India on emerging defence technologies, readiness and logistics.

China objects to US support for Taiwan, an island of 23 million people off its east coast that split with the mainland during the civil war that brought the Communist Party to power in Beijing in 1949. The US has no formal diplomatic ties with Taiwan, but is the island’s most important international backer and arms supplier.

Taiwan President Tsai Ing-wen, speaking at a military ceremony on Monday morning, reiterated the need for Taiwan to boost its defence capacity due to “the continuous expansion of authoritarianism”, although she made no mention of the latest military activity.

“The more preparations we make, the less likely there will be rash attempts of aggression. The more united we are, the stronger and safer Taiwan would become,” Tsai told the assembled officers.
US arms sales to Taiwan are a constant irritant in Beijing’s relations with Washington.

The Chinese foreign ministry said on Saturday that it “deplores and firmly opposes” defence cooperation between the US and Taiwan and that Washington’s defence bill “severely affects peace and stability across the Taiwan strait”.

China’s military has often used large military exercises as a demonstration of force in response to US government actions in support of Taiwan.

It conducted extensive live-fire military exercises in August in response to US House Speaker Nancy Pelosi’s visit to Taiwan.

Beijing, which has never renounced the use of force to bring Taiwan under its control, views visits from foreign governments to the island as de facto recognition of the island as independent and a challenge to China’s claim of sovereignty.

Rishi Sunak to take over as premier on Tuesday