Iran’s Foreign Ministry Spokesman Nasser Kanaani has refuted allegations that Tehran is smuggling weapons to the Houthi rebel group in the Yemeni port city of Hodeidah through the Iranian port of Bandar Abbas.

Speaking to reporters on August 15, Kanaani called the claims “baseless and repetitive staging” on the part of the “invading coalition and their Western supporters”, according to the Iranian foreign ministry’s website.

He said that the invading coalition and their Western supporters must be held accountable for the crimes committed for seven years in Yemen.

Kanaani noted that the crimes resulted in the killing of innocent people and the destruction of Yemen’s infrastructure, calling the incident the greatest humanitarian catastrophe of the century.

He suggested that the claims made were intended to divert public attention away from the realities of the Yemen crisis.

“Iran’s support for the Yemeni people was political from the very beginning of the crisis and that Iran has always backed the peace process in Yemen and also the UN’s efforts to peacefully end this devastating war and to keep the truce in Yemen,” he added.

On August 13, Saudi-based Al Arabiya published a video of an alleged smuggler who detailed several operations involving a Houthi group smuggling weapons from Iran to Yemen.

The smuggler claimed that weapons were transported to the Gulf of Oman where they were received by the group and later taken to the port town of Berbera in Somaliland and loaded onto another boat.

Referring to video, Yemeni Interior Minister Muammar al-Eryani said that the group had been arrested by security forces on Yemen’s west coast, adding that the confession confirmed Tehran’s continued supply of weapons to the Houthis “in flagrant defiance of international law and [UN] Security Council resolutions related to the Yemeni crisis”.

Eryani called on the UN and the international community to issue a condemnation of Iran’s “subversive policies”.

The Iranian government has repeatedly stated that it would continue to support the Houthis against the Saudi Arabian-led coalition, backed by the United States.

In 2015, Saudi Arabia led a military coalition that intervened in Yemen against Houthi forces that removed the internationally recognized Yemeni government from power in late 2014. The conflict in Yemen is mostly seen as a proxy war between Saudi Arabia and Iran, two countries widely seen as archrivals in the Middle East.

In a January 2022 report, the UN Panel of Experts said that there was evidence that two weapons shipments intercepted by US forces had originated at the Iranian port of Jask. The report mentioned a mix of the seized weapons and a “common pattern of supply likely from [Iranian] government stocks, involving dhows in the Arabian Sea, which transport weapons to Yemen and Somalia”.

UN special envoy for Yemen Hans Grundberg recently announced that a truce in the war-torn country that expired on August 2 could be extended by two months.

The UN-brokered truce between the government and the Iran-backed Houthi movement has largely held since it came into effect nationwide in early April. 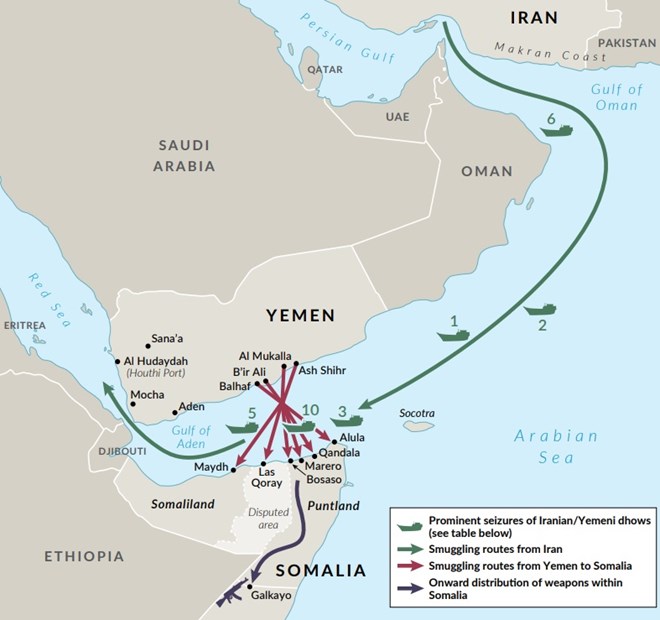