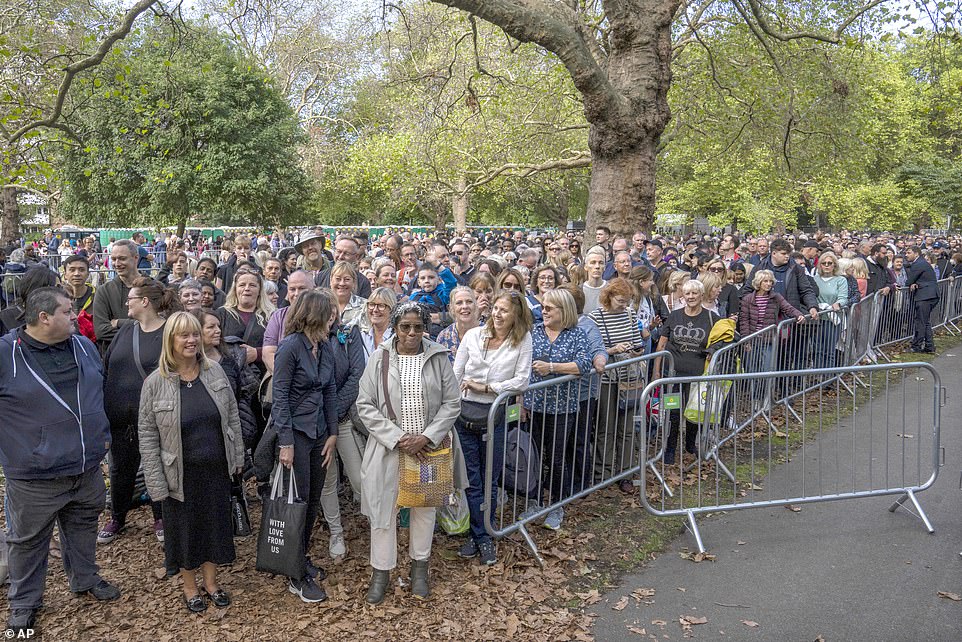 LONDON: Thousands of people spent London’s coldest night in months huddled in line to view the coffin of Queen Elizabeth II, and authorities warned Saturday that arriving mourners face a 24-hour wait.
Police arrested a man after what the force described as a “disturbance” Friday night in Parliament’s Westminster Hall, where the queen’s coffin is lying in state, draped in her Royal Standard and capped with a diamond-studded crown.
Parliamentary authorities said someone got out of the queue and tried to approach the coffin on its platform. The Metropolitan Police force said a man was detained for a suspected public-order offense.
The tide of people wanting to say goodbye to the queen has grown steadily since the public was first admitted to the hall on Wednesday. On Friday, authorities temporary halted letting more visitors join the end of the line, which snakes around Southwark Park some 5 miles (8 kilometers) from Parliament.
Overnight, volunteers distributed blankets and cups of tea to people in line as the temperature fell to 6 degrees Celsius.
People had myriad reasons for coming, from affection for the queen to a desire to be part of a historic moment.
Simon Hopkins, who traveled from his home in central England, likened it to “a pilgrimage.”
“(It) is a bit strange, because that kind of goes against my grain,” he said. “I’ve been kind of drawn into it.”
Members of the public kept silently streaming into Westminster Hall even as the queen’s four children — King Charles III, Princess Anne, Prince Andrew and Prince Edward — stood vigil around the flag-draped coffin for 15 minutes on Friday evening. A baby’s cry was the only sound.
Before the vigil, Edward said the royal family was “overwhelmed by the tide of emotion that has engulfed us and the sheer number of people who have gone out of their way to express their own love, admiration and respect (for) our dear mama.”
All eight of Queen Elizabeth II’s grandchildren are due to stand vigil beside her coffin on Saturday. Charles’ sons, Prince William and Prince Harry, will attend along with Princess Anne’s children, Zara Tindall and Peter Philips; Prince Andrew’s daughters, Princess Beatrice and Princess Eugenie; and the two children of Prince Edward – Lady Louise Windsor and James, Viscount Severn.
William, who after his grandmother’s death is now the heir to the throne, will stand at the head of the coffin and Harry at the foot. Both princes, who are military veterans, will be in uniform.
Most senior royals hold honorary military roles and have worn uniforms to commemorate the queen. Harry, who served in Afghanistan as a British army officer, wore civilian clothes during the procession of the queen’s coffin from Buckingham Palace because he is no longer a working member of the royal family. He and his wife Meghan quit royal duties and moved to the United States in 2020.
The king, however, has requested that both William and Harry wear their military uniforms at the Westminster Hall vigil.
People queuing to see the queen have been of all ages and come from all walks of life. Many bowed before the coffin or made a sign of the cross. Several veterans, their medals shining in the spotlights, offered sharp salutes. Some people wept. Many hugged one another as they stepped away, proud to have spent hours in line to offer a tribute, even if it lasted only a few moments.
On Friday, the mourners included former England soccer captain David Beckham, who lined up for almost 12 hours to pay his respects. Wearing a white shirt and black tie, he bowed briefly to the coffin before moving out of Westminster Hall.
“We have been lucky as a nation to have had someone who has led us the way her majesty has led us, for the amount of time, with kindness, with caring and always reassurance,” Beckham told reporters afterwards.
The lying-in-state is due to continue until Monday morning, when the queen’s coffin will be borne to nearby Westminster Abbey for a state funeral, the finale to 10 days of national mourning for Britain’s longest-reigning monarch. Elizabeth, 96, died at her Balmoral Estate in Scotland on Sept. 8 after 70 years on the throne.
Hundreds of heads of state, royals and political leaders from around the world are flying to London to attend the funeral, including US President Joe Biden and Japanese Emperor Naruhito and Empress Masako.
After the service at the abbey, the late queen’s coffin will be transported through the historic heart of London on a horse-drawn gun carriage. It will then be taken in a hearse to Windsor, where the queen will be interred alongside her late husband, Prince Philip, who died last year.
Hundreds of troops from the British army, air force and navy took part in an early-morning rehearsal on Saturday for the final procession. As troops lined The Long Walk, a picturesque path leading to Windsor Castle, the thumping of drums echoed into the night as marching bands walked ahead of a hearse.
London police said the funeral will be the largest single policing event the force has ever handled, surpassing even the 2012 Summer Olympics and the Platinum Jubilee in June celebrating the queen’s 70-year rein.
“The range of officers, police staff and all those supporting the operation is truly immense,” said Metropolitan Police Deputy Assistant Commissioner Stuart Cundy.