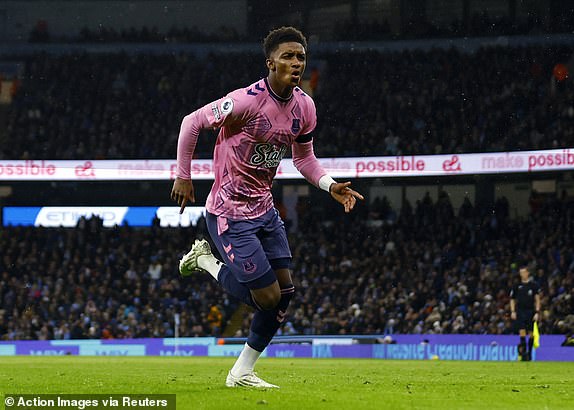 Manchester City defender John Stones says a point against Everton is “difficult to take” after his side were held in a feisty Premier League contest at Etihad Stadium.

The result leaves second-placed City seven points adrift of Arsenal, who extended their lead at the top of the table after beating Brighton on Saturday.

“I don’t really know what to say. I feel like we’ve lost two points,” said Stones.

“It’s difficult to take after the game. We showed great character to keep fighting and pushing. It was a bit of a scrappy game.”

Erling Haaland, noticeably incensed after an early exchange with Everton’s Ben Godfrey that left the Norway striker requiring treatment, finished off a lovely Riyad Mahrez move to open the scoring in the 24th minute.

However, during a tumultuous second half Demarai Gray scored a stunning equaliser after Rodri gave the ball away, making ground down the left and curling home a shot from just inside the area.

City threw what they could at the visitors during 11 minutes of stoppage time, but Everton stifled their attempts to cap off the year with a win.
Stones added: “We controlled the game for the majority of the time and had a lot of chances but couldn’t seem to get that goal.

“I’m very pleased with how we played. The result doesn’t reflect that. When the game is so disrupted, a lot of time-wasting [happens]. We kept creating chances but it didn’t come off.

“We conceded two shots all game but it’s overlooked because of that incredible goal.”

A victory would have seen Pep Guardiola’s side close the gap on his former assistant Mikel Arteta’s relentless Arsenal. After the same number of games last season, City were top of the league and the Gunners were 12 points behind in sixth.

This season, City are trying to win a third successive Premier League title but have dropped points on three more occasions than Arsenal, with the two sides still yet to face each other in the league.
Haaland fired up but stoppages restrict City’s flow
Having scored twice against Leeds on Wednesday to become the quickest player to 20 Premier League goals in a season, Haaland seemed to direct any further frustration at his four-week World Cup-enforced absence from football towards Godfrey.

The defender, starting his first game since breaking a leg in Everton’s season opener, nudged Haaland in the early stages in an attempt to assert his authority, but seemed to only anger him – and the two engaged in a battle throughout the opening 45 minutes.

Haaland gesticulated and waved at the crowd in an attempt to spur them on, celebrated his opener wildly in Godfrey’s direction, and was eventually forced to calm down after being booked for a rash challenge just before half-time.

In a first half lacking clear opportunities, Haaland hit the side netting and Stones’ header struck a post as referee Andy Madley dished out five yellow cards.

Lengthy delays prevented City from truly taking control of the game in the second half.

A six-minute delay on account of the assistant referee’s radio being faulty, followed by another break as City forward Jack Grealish received treatment, sapped the energy that had been so high in the first period.

Gray’s equaliser rekindled some fire in City but the game ebbed away from them as Everton defended resolutely.

A searching pass from Mahrez could not find a way through to Haaland and a frantic melee in the box resulted in a stellar save from Pickford.

City are without a win in two home games, having recorded 11 straight victories at the Etihad before conceding in the 98th minute and losing to Brentford last time out. 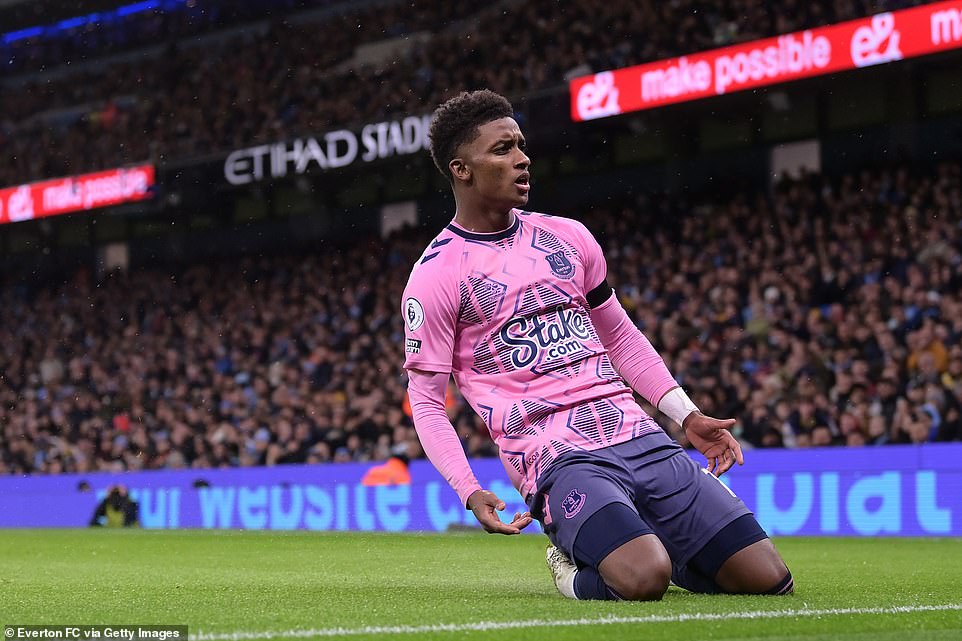 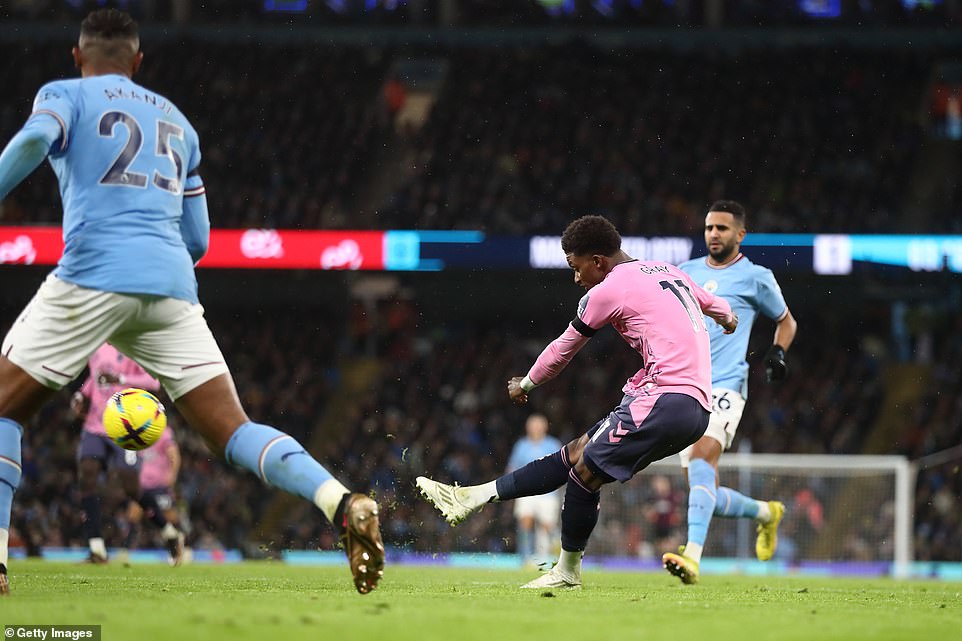 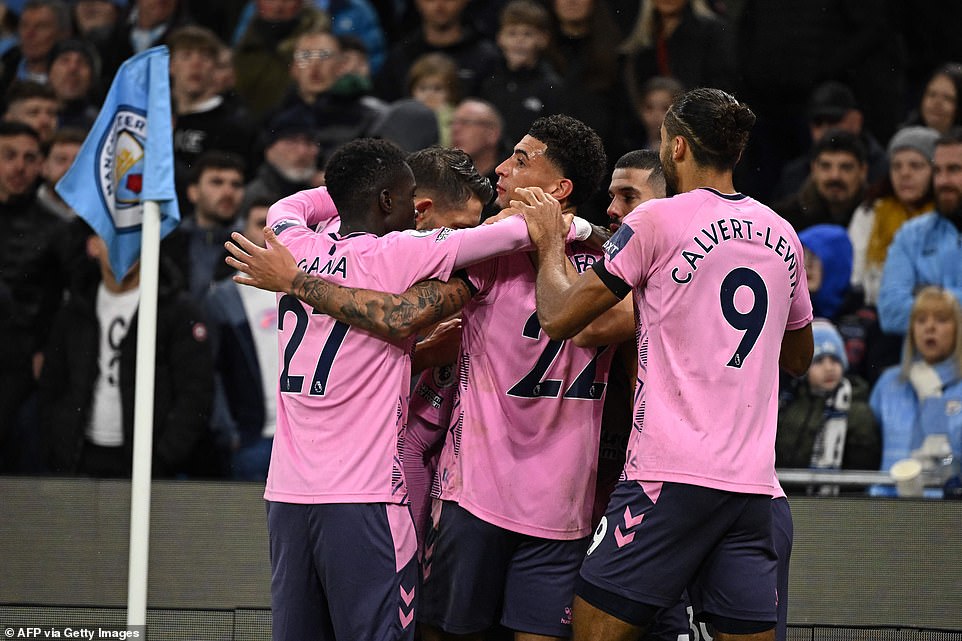 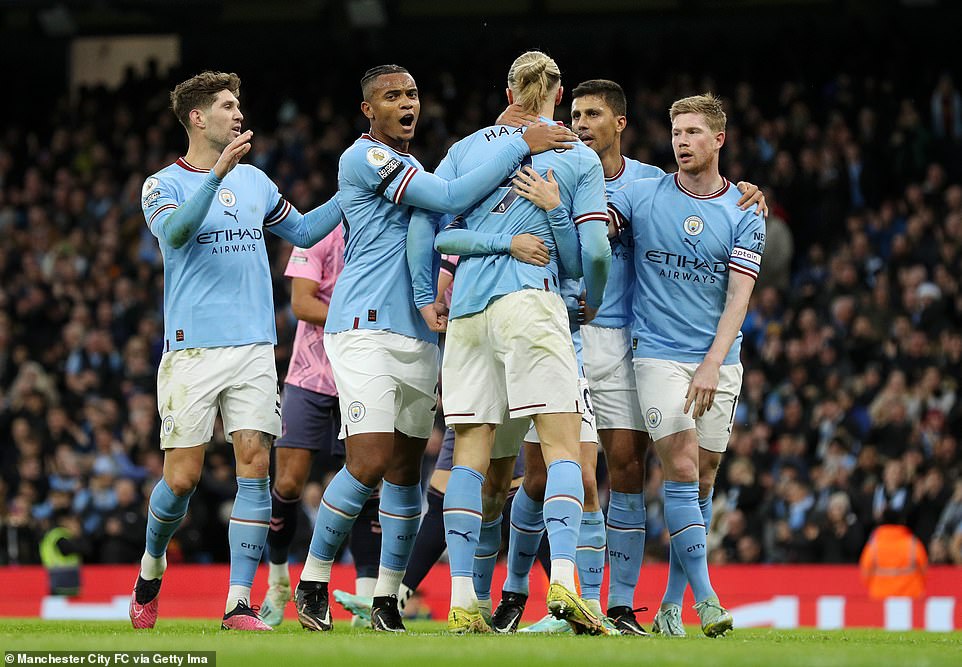 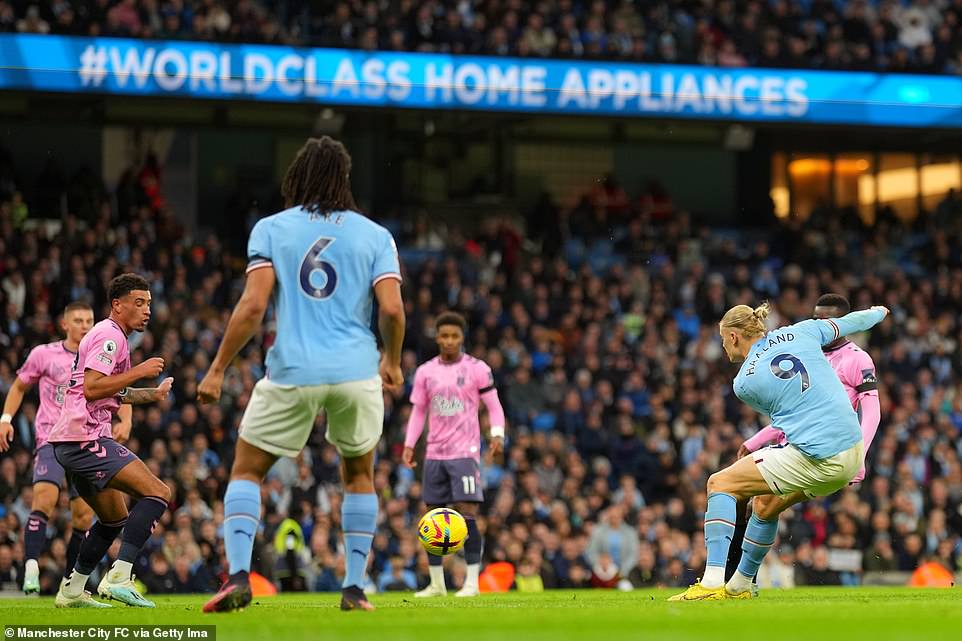 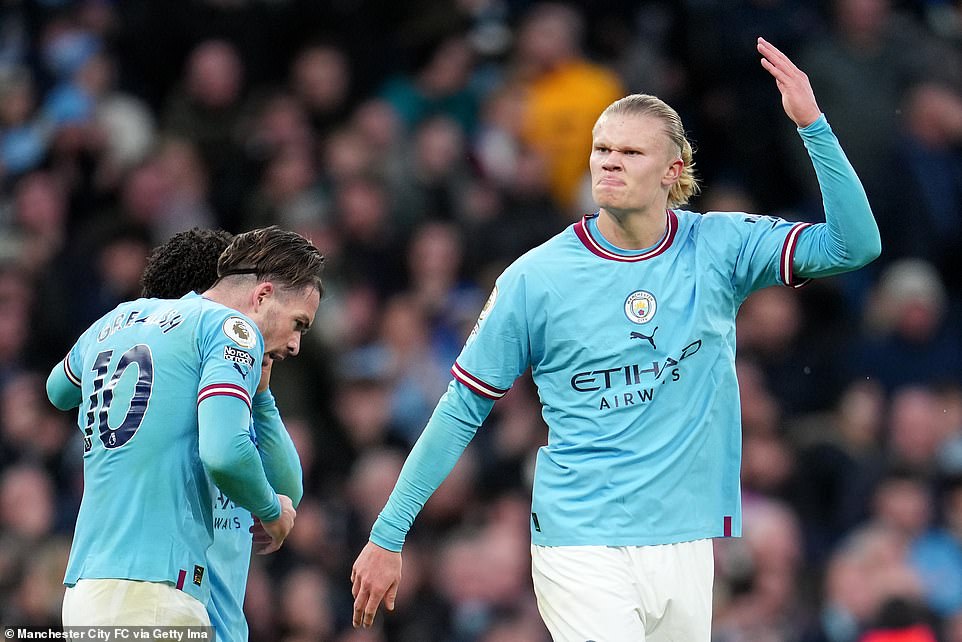 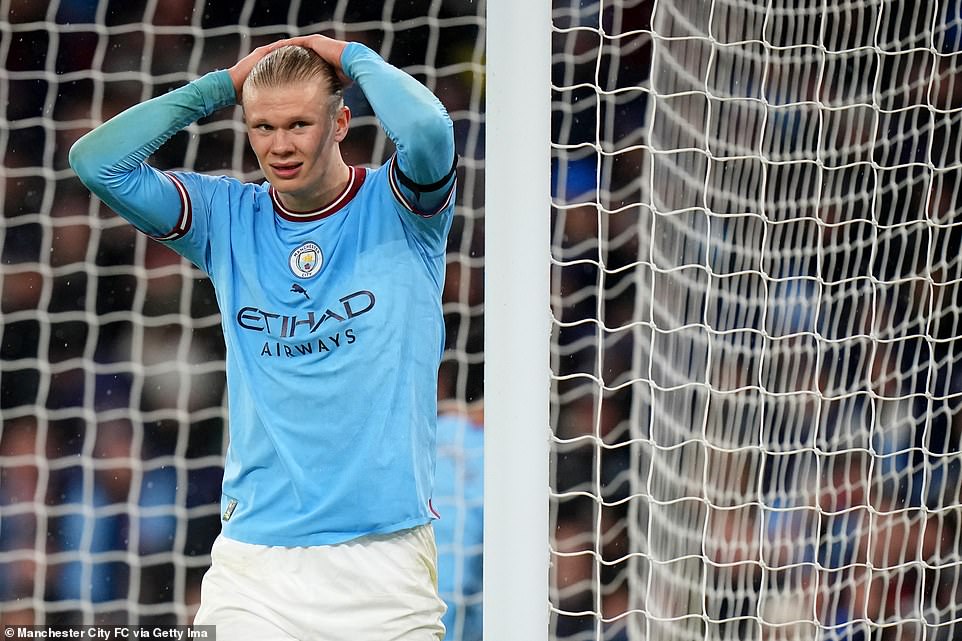 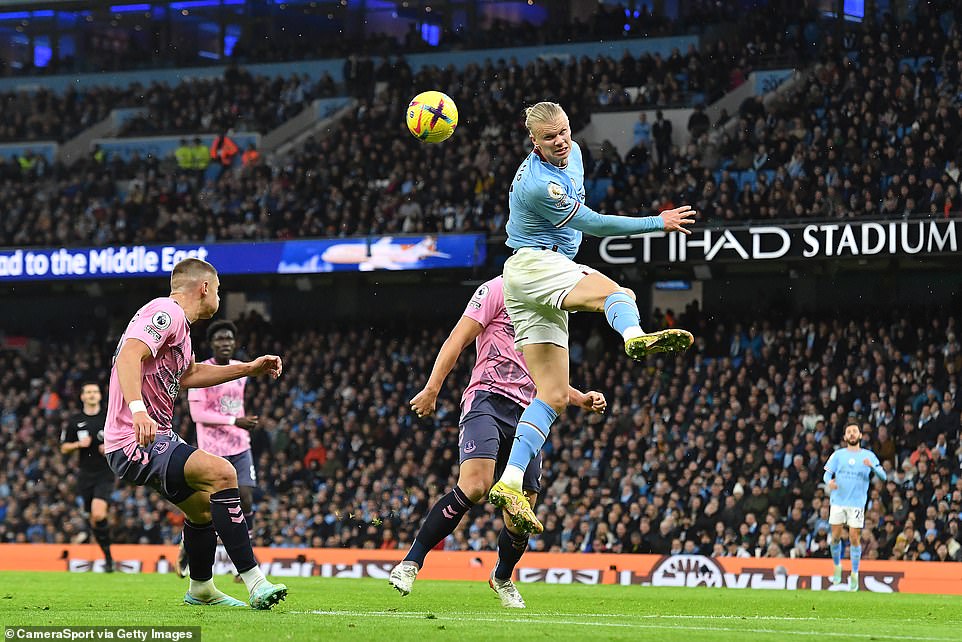 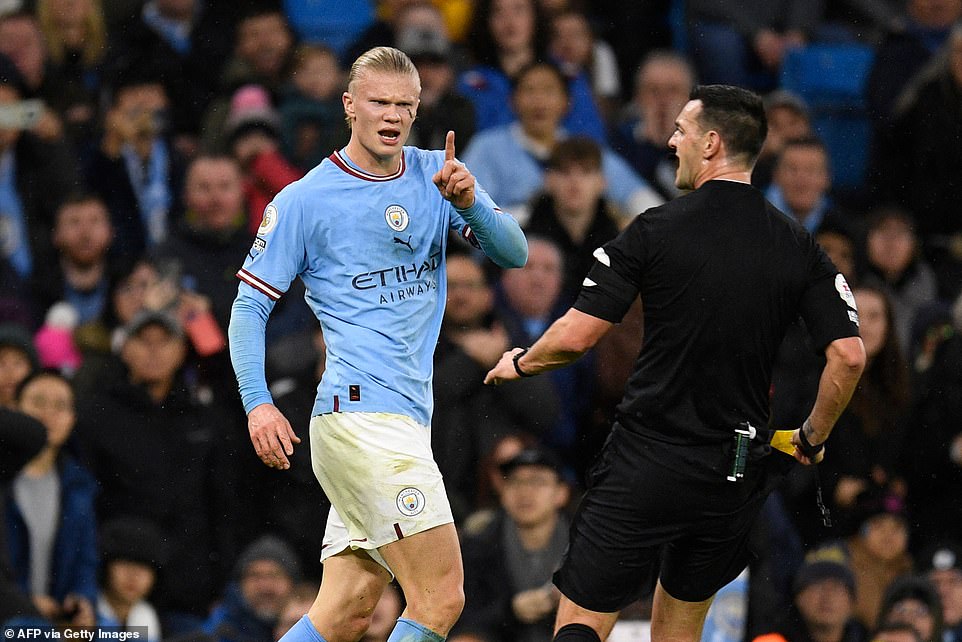 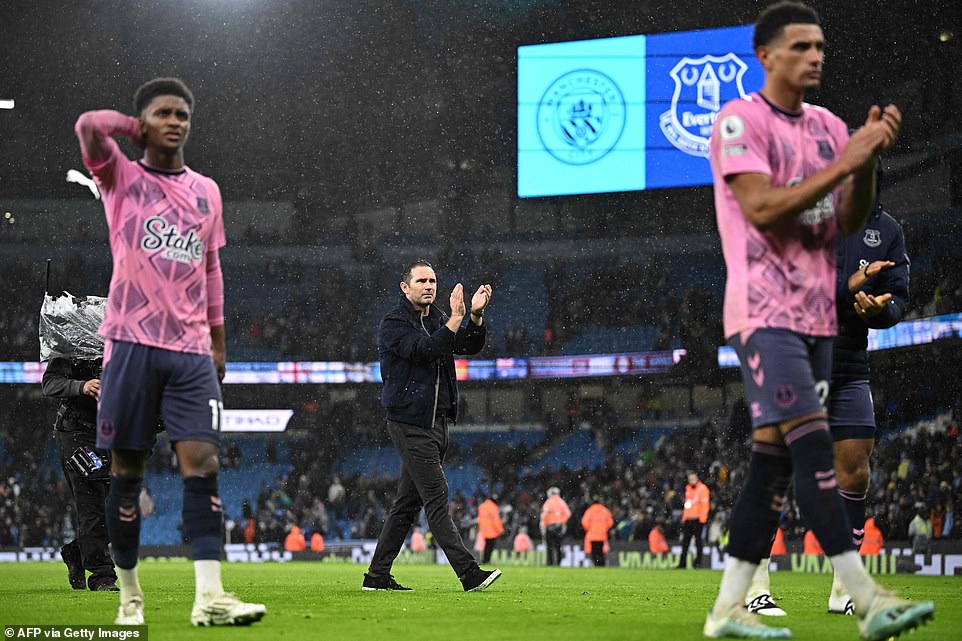 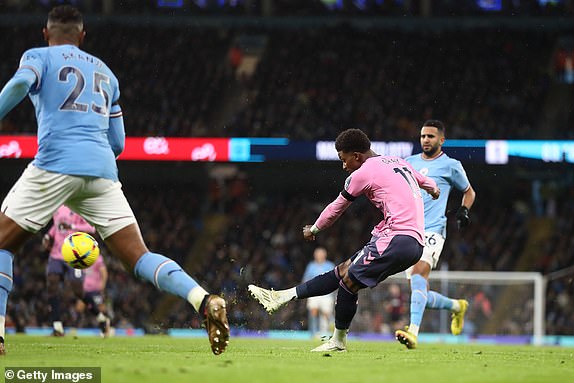