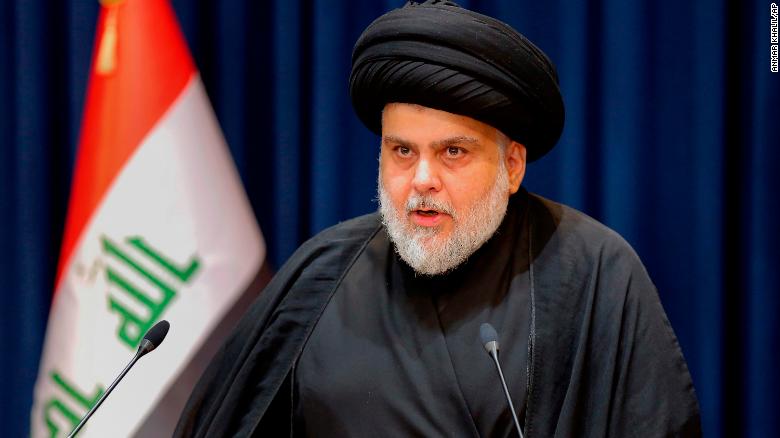 Muqtada al-Sadr might have ordered his followers to withdraw from violent clashes that rocked Baghdad last week, but the influential Shia cleric’s latest move has only deferred Iraq’s reckoning with the paralysis that has plagued its politics since the elections of October 2021. It’s a dysfunction that al-Sadr has vowed to end. Yet it is one that he, too, is responsible for.

Arguably the country’s most recognisable cleric-politician, al-Sadr emerged victorious in last year’s election. The elections led to the creation of two camps: The Sadrist-led Saving the Homeland alliance (which included Sunni and Kurdish forces as well) and the Iran-backed and Iran-leaning Coordination Framework (CF). The Sadrists were the biggest winners in the elections netting 73 seats.

The Sadrists viewed the win, combined with the broad coalition they had assembled, as an electoral and constitutional mandate for them to form government. Their leader has promised to break with the practice of “consensus governments” that has dominated Iraqi politics since 2005 — under which all political forces are included in the administration.

Previous elections have always been followed by a prolonged bargaining process behind closed doors among the political classes to determine who forms the next government and decide their respective shares within it. The consensus that emerges is based not just on election results but on coercive and political capital (including foreign backing).

This is widely recognised as a recipe for dysfunction and a way of perpetuating the capture of the state by the ruling oligarchy of political actors. With weak institutions, the impotence of the rule of law and a culture of venality dominating elite politics, political empowerment becomes a way of turning state institutions into personal fiefs used for enrichment and for weaving patronage networks.

Al-Sadr instead wants Iraq to adopt a policy of governments elected by a simple majority, with electoral winners and losers, a ruling administration and a parliamentary opposition. For his rivals in Shia politics, however, exclusion from the government is unacceptable: It does not just mean a loss of influence, power and revenue; it also leaves them physically and legally vulnerable. As for al-Sadr, he has made clear that he will not countenance a CF-led government citing their corruption, paramilitary activities and Iranian ties. He has framed his position as a revolutionary one aimed at overturning the fundamentals of the governing order.

This clash of wills has stalled government formation since October and last week erupted into violence. In trying to understand this intra-Shia divide, some observers have focused on al-Sadr’s reformist rhetoric and his Iraq-first stance.

Yet, these are superficial factors that do not explain the motives underlining today’s contest. Al-Sadr and his rivals are indeed divided on, among other things, issues relating to Iraq’s relation with Iran and the nature of Iraqi governance but this is not what is driving the instability of the past 10 months. Al-Sadr’s “revolution” is, at heart, a power play aimed at securing primacy within Shia politics and by extension over the Iraqi state.

Al-Sadr positions himself as a political outsider who will initiate a root and branch overhaul of the system taking aim at its worst characteristic features – corruption, the proliferation of armed groups, the crippling lack of sovereignty and so on.

This has been music to the ears of many Iraqis who yearn for nothing more than the demise of the post-2003 order in its current form and the construction of an alternative capable of meeting their aspirations. Such a transformation cannot of course happen overnight and neither al-Sadr nor anyone else can realise the revolutionary dreams currently floating about on Iraqi social media.