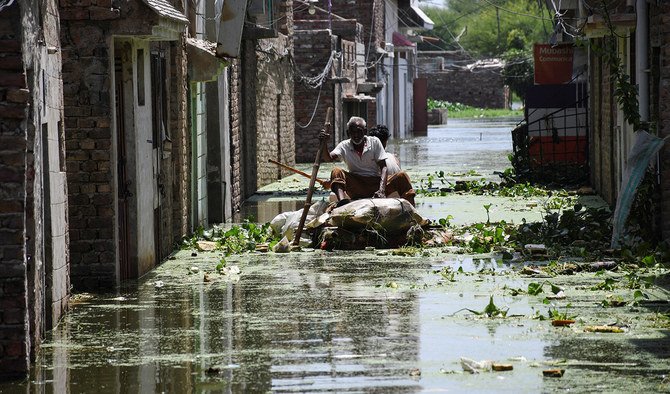 KARACHI/ISLAMABAD: Pakistan has been struggling to fight outbreaks of dengue and other waterborne diseases, particularly in the country’s south, authorities said on Monday, with the government and charities setting up hundreds of medical camps nationwide to treat patients in flood-ravaged areas.

Historic monsoon rains and melting glaciers in northern mountains brought cataclysmic floods, which have killed at least 1,314 and affected over 35 million people, according to data shared by the National Flood Response Coordination Centre (NFRCC). A third of the country is submerged and the extreme weather, widely attributed to climate change, is still expected to continue for the next few days.

In the southern Sindh province, 511 people, including 219 children, have lost their lives, while thousands across the country are under attack by various vectorborne and waterborne diseases, including diarrhoea, malaria, skin infections and dengue, according to medics working in the field.

Official data released by the Sindh government shows the spike in number of dengue cases from 361 in July to 1,336 in September, while 257 cases alone have been reported in first four days of September. The Sindh government has set up 110 medical camps and assigned 117 doctors and 277 paramedics, who have treated over 785,000 patients in flood-hit areas since July.

“The cases of malaria are also increasing due to water contamination. A lot of places are still inaccessible to health teams and the real picture of diseases would be known only after the floods water recedes.”

According to a report by the Sindh health department, 94 people were diagnosed with dengue on Saturday, while 161 people were admitted in hospitals on Thursday and Friday.

Dr. Omar Sultan, an official at Jinnah Post-Graduate Medical Center (JPMC), the largest state-run health facility of the province, said some 50 people were currently admitted in four wards of the hospital in Karachi.

Sindh minister health, Dr. Azra Fazal Pechuho, said the provincial government was dealing with diseases with the support of its international partners.

“Supplies of antibiotics are being procured and distributed and internally displaced persons are being monitored to identify cases of respiratory issues, diarrhoea, which are immediate concerns,” she told Arab News.

Dr Muhammad Anees, who is heading a medical relief camp set up by Al-Mustafa Welfare Society in Karachi, said almost every one of the flood victims, who took shelter in the southern port city, had some sort of infectious disease.

“I have checked up over 250 people within two days, mostly diagnosed with gastric or skin problems, which has directly been caused by rains and subsequent flooding in their hometowns,” Dr Anees told Arab News, adding most of the patients had rashes below their knees due to wandering in water for long.

“Waterborne diseases in flood victims are rampant. In few cases, the skin was rusted to a level to develop chlorides.”

Teams of volunteer doctors have also set up camps in flood-hit areas of Punjab, with supplies of essential medicines to treat patients.

Haseeb said their teams had set up at least 40 medical camps so far in Punjab and Sindh provinces to treat the patients. “The situation in Sindh and Balochistan provinces is extremely dangerous as our teams have been struggling to reach out to patients as almost all major roads have been washed away by the floods,” he said.

He appealed to the Balochistan provincial government and the Pakistan Army to help them reach inaccessible areas in the southwestern province through helicopters. “If these diseases are not controlled timely through effective medical assistance, this could turn into another disaster,” Haseeb warned.

A number of charities and welfare organisations have also mobilised their resources and manpower to reach flood-affected areas for rescue and relief work.

Dr Zahid Latif, secretary of Al-Khidmat Foundation Health Services, said vectorborne diseases were spreading in all flood-hit areas across Pakistan and they had set up over 200 medical camps so far and treated around 70,000 patients for these diseases.

More than 1,000 doctors and paramedics have been working with the foundation in flood-affected districts of Punjab, Sindh, Khyber Pakhtunkhwa and Balochistan provinces to provide relief to affectees.

“The outbreak of diseases in all flood-affected districts is extremely serious and could turn into a health emergency if not handled properly in the next couple of weeks,” he warned, adding that pregnant women and children were the most affected.

“We will be distributing hygiene bags in the affected areas by next week containing soap, sanitary pads for women and other necessary items. We are also planning psycho-social rehabilitation of the affected people with help of our volunteers.”