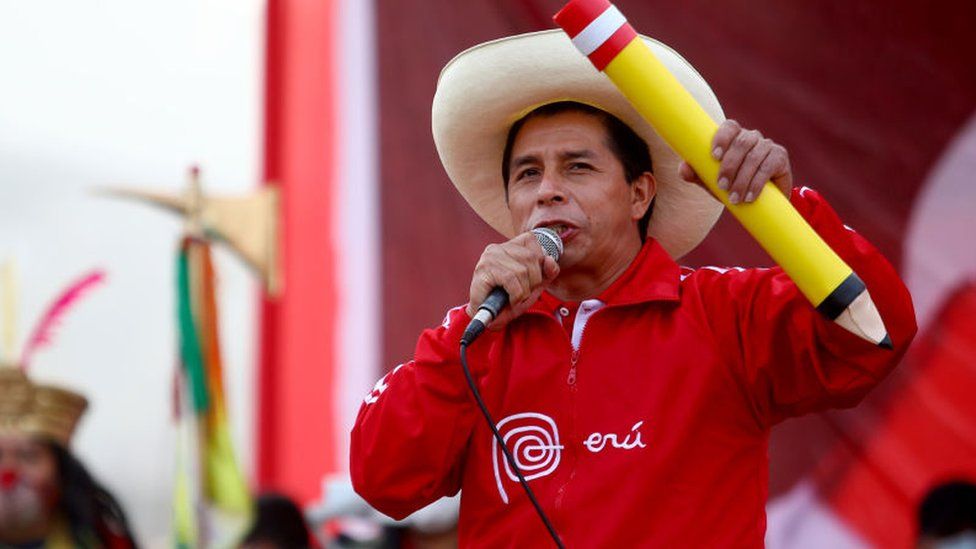 Peru’s president, Pedro Castillo, has been removed from office and detained on charges of “rebellion” after he announced he would shutter congress and install a “government of exception” – just hours before he was due to face an impeachment vote.

The public prosecutor’s office confirmed late on Wednesday that Castillo had been arrested and charged with allegedly “breaching constitutional order”, after he was accused of an attempted coup and seen fleeing the presidential palace.

Earlier in the day, the country’s national police tweeted that “former president” Castillo had been detained, shortly after congress voted to remove him.
The vote came after Castillo ordered a night-time curfew and the reorganisation of the judiciary and prosecutor’s office, which is investigating him for alleged corruption and influence trafficking – charges which he denies.

Castillo’s vice-president, Dina Boluarte, described the move as a coup attempt, and hours later was sworn in as the new president, becoming the first female head of state in Peru’s history.

Boluarte called for a political truce and the installation of a national unity government. “What I ask for is a space, a time to rescue the country,” she said.

The day of high drama put an end to Castillo’s tumultuous 17 months in power, which has already seen five cabinets, more than 80 ministers, six criminal investigations and two failed attempts to impeach him.

In a televised speech, Castillo said he would temporarily shut down congress, launch a “government of exception” to rule by decree and called for new legislative elections.
The move immediately prompted mass resignations from the cabinet, and accusations that Castillo had attempted to seize power illegally.
“I strongly condemn this coup d’état and call on the international community to assist in the democratic re-establishment of democracy in Peru,” tweeted the foreign minister, César Landa, as he announced his resignation. “Castillo took this decision without my knowledge or support.”

Castillo’s attempt to avoid an impeachment vote swiftly turned into an own goal as the armed forces and the police withdrew their support, saying, in a joint statement, that Castillo’s move was “contrary to the established constitutional order”.

Meanwhile, Peru’s constitutional court called Castillo’s decision to dissolve congress “a coup” and said the leader was no longer in charge of the country.

Castillo’s announcement prompted comparisons with the notorious “autogolpe” or self-coup of April 1992, in which then-president Alberto Fujimori dissolved congress and sent soldiers and tanks on to the streets of Lima.

“What has happened in Peru is a coup d’état,” said Fernando Tuesta, a political science professor at Lima’s Pontifical Catholic University. “Nothing announced by former president Pedro Castillo is allowed by the constitution.”
The US embassy in Lima condemned Castillo’s move. “The United States emphatically urges President Castillo to reverse his attempt to close Congress and allow democratic institutions in Peru to work according to the constitution,” the embassy said in a tweet. “We encourage the Peruvian public to stay calm during this uncertain time.”

Mexico’s president, Andrés Manuel López Obrador, called for “democratic stability for the benefit of the people”. In a string of tweets, the leftist leader said that an atmosphere of “confrontation and hostility” had led Castillo to take decisions that ultimately served his opponents, and led to his removal from office.

Luis Almagro, secretary general of the Organisation of American States, said the constitutional order had been disrupted in Peru and tweeted his “support for “democracy, peace and institutionality in Peru and the urgent need to restore the democratic path in the country”.

Hundreds of protesters gathered outside Congress rejoicing Castillo’s fall, though most of the country has remained calm throughout the rapid succession of the day’s events.

Castillo became president winning by the narrowest of margins in June 2021, shaking up the country’s entrenched class system.

The former primary school teacher, farmer and union activist had no previous governing experience, and took office as an outsider, pledging to support poor Peruvians who had been left behind by the country’s stellar economic growth since the beginning of the century.

His win reflected massive disenchantment with the political elite after numerous corruption scandals.

But the novice president made numerous blunders, appointing barely qualified ministers and accumulating allegations of corruption and influence trafficking linked to his family and allies, which were investigated by the public prosecutor’s office.

The chairman of the European Parliament was fired