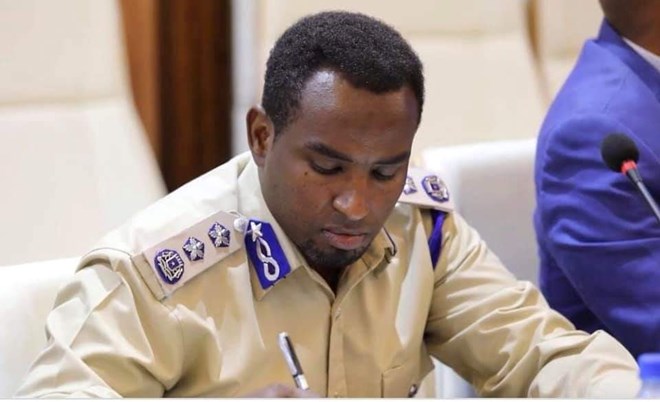 Mogadishu (HOL) – Somali President Hassan Sheikh Mohamud has reinstated the full army ranks of a former Banadir Police Commissioner who was sacket in April for ordering parliamentarians to ditch a vote that sought to extend the previous government’s mandate for two years.

Sadak Omar (Sadak John), who was voted into parliament earlier this year, has been restored to the rank of Brigadier General.

“Senior General Saadaq Omar Mohamed, from today I signed this presidential decree, he has the right to all the rights of the forces that the law allows, while this decree cancels all the laws that preceded it,” President Hassan said.

Somali Police Commissioner Gen. Abdi Hassan Mohamed Hijar fired  Sadak John in April on the morning of a controversial parliament vote to extend former President Mohamed Abdullahi’s term for two years while the country was amidst an electoral crisis.

Sadak John announced on Universal TV that he was suspending the parliamentary session and ordered MPs to stay away from parliament. Speaking to MPS directly, he chastised lawmakers for seeking an extension and said they should seek a new mandate through indirect elections.

Less than half an hour later, Sadak was unceremoniously sacked via Twitter.

Sadak was being guarded by up to 100 armed men who set up roadblocks around his residence to repel any government attack.

President Hassan Sheikh Mohamud was one of the leading opposition voices in Somalia who were against the two-year extension, calling it “illegal” and a “power grab.”

Sadak John kept a relatively low profile since his sacking but resurfaced n July 2022 alongside Federal and State forces in Galmudug.

John was elected to HOP24 representing Galmudug in January 2022.

Who is Ibrahim Traore

Former Peru president ordered to remain in custody for 18 months