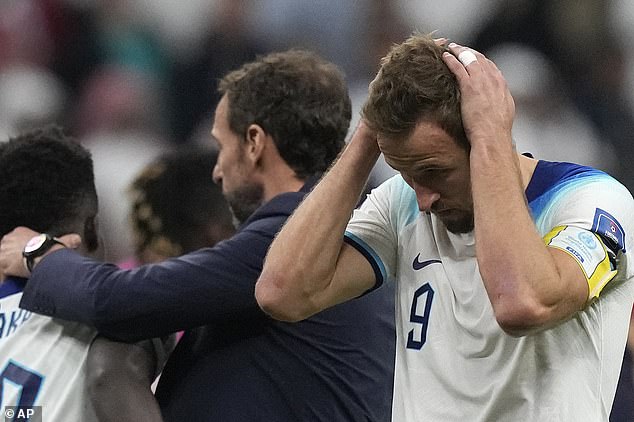 The French national team attended the semi-finals of the World Cup after beating England in a balanced match.

The French team started the game aggressively and France was better at managing the game while the England team used counterattacks.

France wanted to score an early goal to take the lead in the match as France were playing attacking runs.
In the 17th minute, the French team took the lead after Auellien Tchoumeni scored a rocket goal and gave his team the lead.

After that, the French team went on the defensive and the England team took control of the game while creating dangerous opportunities.

France were playing counter-attacks in defense while England put frantic pressure on the French team who went into defence.

But that’s how it ended in the first half of the game where the French team was in the lead but the England team was the better team.

In the second half, the English team continued to pressurize them by placing the French team in the area, which was protecting the goal they scored.

In the 54th minute, England scored a goal after the defenders of France made a mistake on Bukayo Saka.

The captain of England scored the goal of the game and made it 1/1 for his England team to return to the game.
England did not stop there and were the better side of the game, more powerful than France who went into defense and looked tired.

Giroud wasted a crazy chance as England’s goalkeeper made a brilliant save in the 77th minute.

But in the next ball, he created a golden opportunity for the French team and converted a goal for Olivier Giroud who gave the lead to his team again and made the game 2/1.

England were not disappointed in the game and continued their efforts to score a goal to bring the game back to a tie.

In the 81st minute, VAR made a record for the England team and stopped England captain Harry Kane, but he sent the ball into the air instead of putting it in the net.

This is how the game ended and the French team went to the semi-finals of the World Cup at the same time they sent the England team home.

Real Madrid will win La Liga this season, but when?