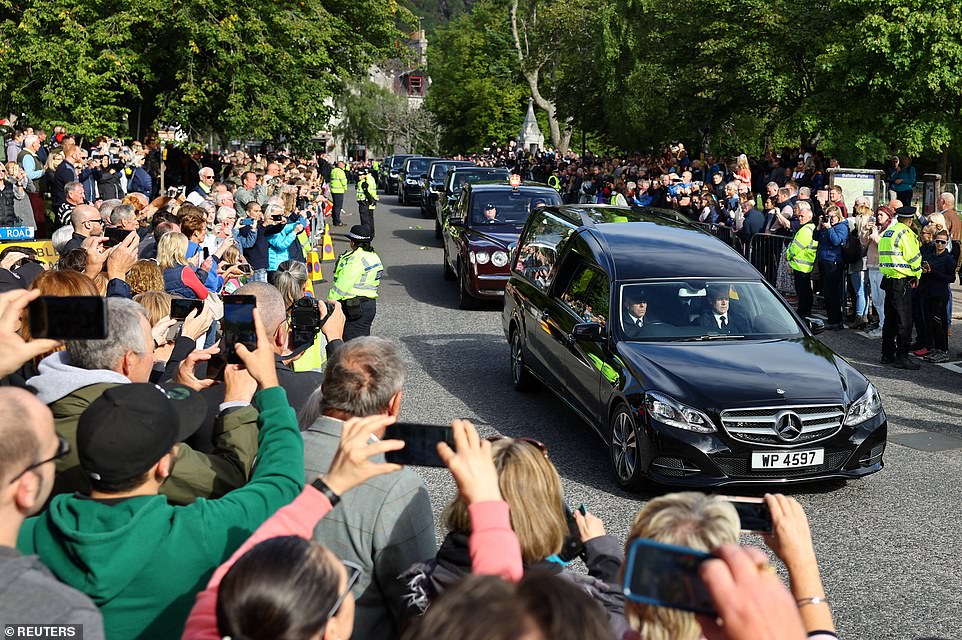 Tearful well-wishers are paying a fond farewell to the Queen after her coffin left Balmoral accompanied by a sombre Princess Anne to begin a six-hour journey to Edinburgh, where she will lie in state.

As bright sunshine broke through the morning mist, the hearse carrying the late monarch passed through the gates of her beloved Highland home, with the gentle rush of the River Dee one of the few sounds that could be heard as a small gathering of local people watched on in silence.

Minutes later, the hearse passed through Ballater where villagers – many of whom knew the monarch personally – threw flowers onto the road. A hushed silence descended as people bowed their heads and the Lord Lieutenants from Aberdeenshire and Kincardineshire stood to attention outside Glenmuick church.

Now with a single motorbike outrider leading the way and six vehicles following, the hearse is travelling at a stately pace through the stunning Aberdeenshire countryside, with Princess Anne and her husband Vice Admiral Sir Tim Laurence following directly behind in a state Bentley.

Earlier, the Queen’s oak coffin – draped in the Royal Standard for Scotland –  was carried in the hearse by six of the Balmoral estate’s gamekeepers after they were allowed time to say their last goodbye. The wreath is made up of flowers from the Balmoral estate including sweet peas – one of the Queen’s favourite flowers – dahlias, phlox, white heather and pine fir.

Following a 170-mile journey to the Palace of Holyroodhouse, the coffin will rest overnight in the oak-panelled throne room. Proclamations will be read in the Scottish, Welsh and Northern Ireland devolved parliaments in Edinburgh, Cardiff and Belfast.

Today, huge crowds have started to gather in front of Edinburgh’s Mercat Cross ahead of the proclamation of King Charles III. Thousands of people have lined the Royal Mile, with dozens holding up their phones and cameras to take pictures of the cross.

Tomorrow, the Scottish capital will become the focus of national mourning, with the Queen’s coffin carried in a procession from the palace to St Giles Cathedral, where a Vigil of the Princes is expected to take place before it lies in state for 24 hours.

The Queen’s poignant final journey will eventually end at St George’s Chapel at Windsor Castle, where she will be buried alongside her beloved husband, Prince Philip, alongside her father, George VI, the Queen Mother, and her sister, Princess Margaret.